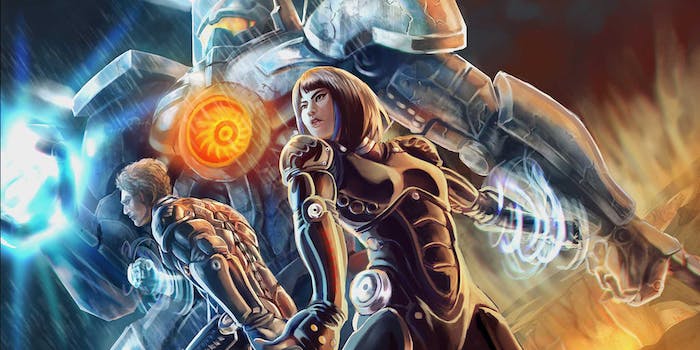 He'll answer any questions about Pacific Rim canon and the extended universe, and he never spoils.

After reporting last week on Star Trek writer Bob Orci literally telling “shitty fans” to “f*ck off” on an Internet message board, it’s pretty refreshing to know that many creators have a great rapport with their fans. Travis Beacham, creator and co-writer of Pacific Rim, is one of them.

On his Tumblr, Beacham is prepared to answer any fan questions you’d care to name. Pacific Rim seems to be kind of an “iceberg fandom,” with 90 percent of the action taking place out of sight. Not only is there already a prequel comic and a novelization of the movie, but it’s clear from Beacham’s Tumblr that there’s already a whole expanded universe of characters and backstory information that hasn’t (yet) appeared onscreen.

For example, if you ask him why there were no LGBT Jaeger pilots in the movie, he’s actually going to give you a decent answer—although he probably wasn’t prepared for people accusing him of “queer baiting” for saying that there are LGBT characters in Pacific Rim canon but refusing to tell fandom who they are. Luckily, the reason for this is pretty simple: there may be a Pacific Rim sequel in the works, and there will almost certainly be more official additions to the extended universe. Which means that certain backstory details would count as spoilers. As Beacham explains:

“I consider relationships to be central to the story and I am reluctant to spoil story developments. But I’m sympathetic to your curiosity. I really am. I understand that this is important. That’s why I mention it. I’m not trying to troll or offend anyone with vague answers. I am trying to balance the integrity of future stories with the fandom’s legit curiosity.”

But that’s not all. In fact, the questions he receives from Tumblr fans are pretty varied. Here are a few things we learned from just the past few days:

And a whole lot more, because Travis Beacham’s Tumblr is basically a 24/7 Reddit AMA. However, if you keep reading, you’ll notice that a lot of questions focus on whether future Pacific Rim spinoffs will feature more female characters and minorities.

Issues of gender, race and LGBT representation are particularly relevant to Pacific Rim because there’s already been a lot of discussion (both among fans and in the media) about how it bucks the trend of action/sci-fi movies starring white male antiheroes. Unusually for a mainstream blockbuster, two of the three lead characters are people of color. And while only one of the lead characters is a woman, many argue that Pacific Rim is far less sexist than many movies that actually manage to pass the Bechdel Test. Particularly since as a Japanese woman, Mako Mori represents a demographic that is often sidelined (or misrepresented in stereotypical roles) in mainstream Hollywood cinema.

While Mako technically shares top billing with her partner Raleigh Becket (A.K.A. Charlie Hunnam, of Fifty Shades of Grey), her character development follows a “hero’s journey” arc that’s usually reserved for white male heroes. For this reason, some fans were inspired to invent the Mako Mori test to go along with the Bechdel Test, explaining that although it’s important to point out the discrepancy in numbers of female characters onscreen, having just one unusually well-written female character can be equally important.

If it wasn’t already clear by now, Pacific Rim has a very loyal fanbase for a film that most critics dismissed as entertaining but ultimately forgettable. It seems to be one of those movies where you either “get it” or you don’t, with many fans going to see it multiple times in theaters. Last month there was even a Tumblr-based convention, which included a personal interview with director Guillermo del Toro.

Many creators would do well to learn from Beacham and del Toro’s example. It’s things like this that inspire fans to bring movies to cult status: enthusiasm, positive fan engagement, and ultimately a willingness to listen to your fandom, even if it means hearing a little criticism now and then.