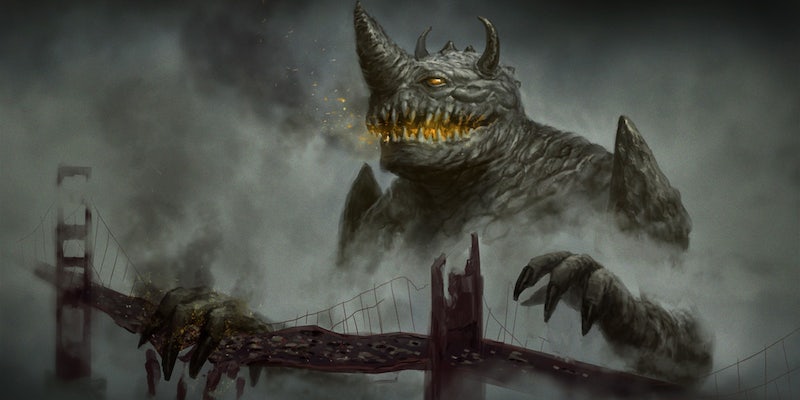 “Pacific Rim” fans get their own virtual convention on Tumblr

Fans of monsters battling giant robots are in for a great 3 days starting Aug. 9.

On August 9, Tumblr is reblogging the apocalypse.

Okay, not really. But Tumblr fans are gearing up for a celebration of summer sci-fi fandom favorite Pacific Rim, and what’s one of a growing number of Tumblr-only “conventions,” where fans replicate the frenzied excitement and activity of real cons in their virtual fandom home.

The weekend-long celebration is planned around the date of the appearance of the first Kaiju in the movie—”Kaiju” being the Japanese term for giant city-destroying monsters like Godzilla. Pacific Rim is Guillermo del Toro’s long-anticipated live-action homage to Kaiju and “mecha,” the term for another genre of Japanese media—the giant, human-piloted robots seen in such cultural staples as Neon Genesis Evangelion.

Because the robots needed to fight back against the kaiju are so big, they need pilots. In Pacific Rim, the pilots are called “Jaegers,” taken from the German word for “hunter.”

The official JaegerConTumblr describes a Tumblr convention as “a collection of events, competitions, online-meetups and celebrations of a particular fandom or character.”  For the Pacific Rim fandom, JaegerCon organizers have lined up everything from intense cosplay to movie screenings and fanfic challenges.

“I am TOTALLY BLOWN AWAY by the amount of interest the JaegerCon post is generating,” Tumblr user and con organizer exorin posted earlier today. “This is the coolest, most awesome thing I have ever been a part of.”

The fans got a boost when Pacific Rim screenwriter Travis Beacham, himself a Tumblr user, reblogged and tweeted about the con.  So far, judging by the notes to the announcement post, nearly 1,500 people have enthusiastically tapped into taking part.

Still, not everyone was enthusiastic. “So a special day to do what people are already doing,” theaggroslair deadpanned. “Why.”

But fandom never needs a reason to celebrate when it’s feeling the love, and for a movie that’s only been out three weeks, Pacific Rim is receiving the lion’s share of love from Tumblr. In addition to the massive fanbase it seems to have generated, memes about whether two characters are “drift compatible”—the leading characteristic jaeger co-pilots need to have—have been making the rounds across fandoms. And the waves of love have only increased in the weeks since the film’s premiere, as word of mouth about the film’s appeal to sci-fi lovers and fans of Japanese media has spread.

So strap into your giant robot and grab your co-pilot. JaegerCon only lasts three days, but there’ll be plenty to do.

After all, canceling the apocalypse is a group effort—and it seems Tumblr is up to the challenge