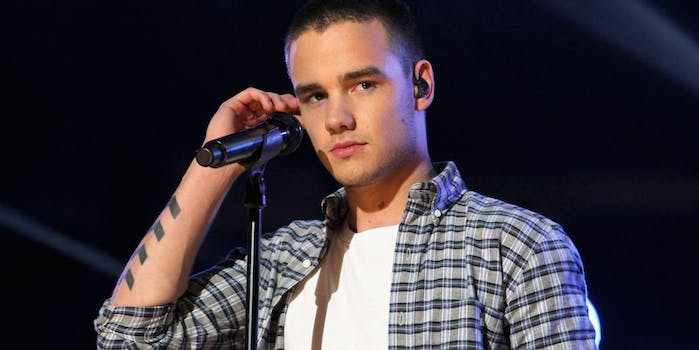 An ill-informed gaffe or an accidental revelation?

One Direction singer Liam Payne left fans confused and offended on Saturday night when he tweeted a supportive message to Willie Robertson of Duck Dynasty, of all people.

Willie Robertson is the son of now-notorious Duck Dynasty patriarch Phil Robertson, who sparked a firestorm with racist and homophobic comments last year. Needless to say, it seems pretty weird that a member of famously squeaky-clean One Direction would suddenly start supporting the show. It’s also odd because several members of the boy band have publicly spoken out in favor of gay rights. Most of their tween fans come from a generation where Phil Robertson-style opinions are not the norm.

Could it be that Liam Payne, innocent English lad that he is, had no idea about the negative connotations of tweeting a message of support to someone from Duck Dynasty?

@williebosshog huge love to you/your family huge respect for your business prosperities and the family values you still all behold. big fan

The tweet quickly sent many Directioners into a panic. Even YouTube celebrity and 1D superfan Tyler Oakley responded with disgust, inspiring a surprising backlash of homophobic abuse from 1D fans themselves.

Wow. Very confused and disappointed by this @Real_Liam_Payne tweet. This literally changes everything… pic.twitter.com/aQajQdJhfQ

If you defend someone actively supporting bigotry, homophobia, and ignorance, we’re not on the same wavelength to even have a discussion.

I live for the ignorance in my replies right now. I’ve never seen so many tweens telling me to kill myself and to leave the fandom. Amazing.

Meanwhile on Tumblr, directioners were already freaking out, many of them trying to track down any evidence that Payne doesn’t share the kind of “family values” usually associated with Duck Dynasty. Luckily, after an hour and a half of One Direction fandom melting down as only One Direction fandom knows how, Payne returned to Twitter to explain that he didn’t necessarily share all of Willie Robertson’s personal opinions. Phew.

Being a fan of someones show and the way they still hold a family together doesnt mean i am ok with all they say.

He went on to reply directly to a few of his fans, telling one, “people can love who they want, (it’s) none of my business.”

@DavidLevitz again i just like the show and i love when families stick together, i havent said i agree with all that theyve ever said

@DavidLevitz also i was severely bullied all through school , i would never wish that feeling on anyone

So, was it just an ill-informed gaffe, or was it the accidental revelation of a real opinion? Either way, 1D fans can rest easy in the knowledge that compared to Justin Bieber’s recent antics, this controversy is probably just a storm in a teacup.