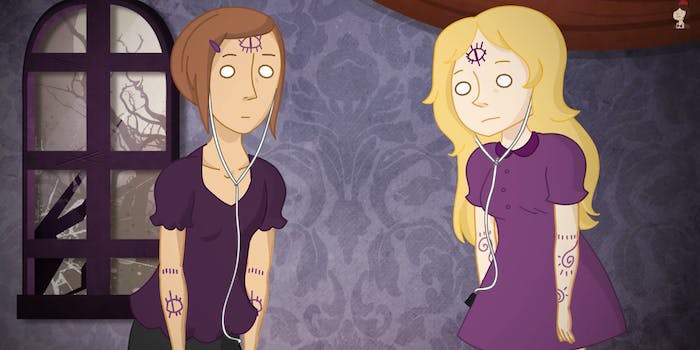 ‘Welcome to Night Vale’ is so popular, it’s turning fangirls into zombies

The most popular podcast in the world takes over fans' brains in this short from Leigh Lahav.

Just how popular is Welcome to Night Vale? So popular it’s taking over Halloween—at least on one all-fangirl YouTube channel.

Are we having a Night Vale apocalypse? Tumblr’s ambassador to YouTube, Leigh Lahav (a.k.a. OnlyLeigh) thinks so. Not content with bringing you a regular dose of fangirl feels on her popular YouTube channel, now she’s taken on the fandom of the year in a zombie spoof that serves as, let’s face it, a highly accurate account of the Night Vale epidemic.

Not content with taking over the #1 podcast spot on iTunes, Night Vale, fresh from a sold-out evening of live performances in New York, takes over regular fangirls in Lahav’s clever video.

The short episode is part of a series called Fangirls, in which Lahav depicts fangirls at home and abroad with humor, wit, and artistry. In the Night Vale episode, entitled “Revenge of the Fangirls,” she manages to pack numerous references to the show: its main character Cecil’s fan-created third eye, the Mighty Glow Cloud, perfect-haired Carlos, the hovering radio station cat, and, of course, the way that love for Night Vale seems to be spreading faster than panic on street-cleaning day.

Lahav’s stand-in is duly afraid. “I don’t like spooky things—that’s why I watch Sleepy Hollow!” she quips.

While we’ve had no word on whether the town of Night Vale is actively experiencing a zombie apocalypse, reports have surfaced that nearby Desert Bluffs is currently hosting a brain-eating barbeque.