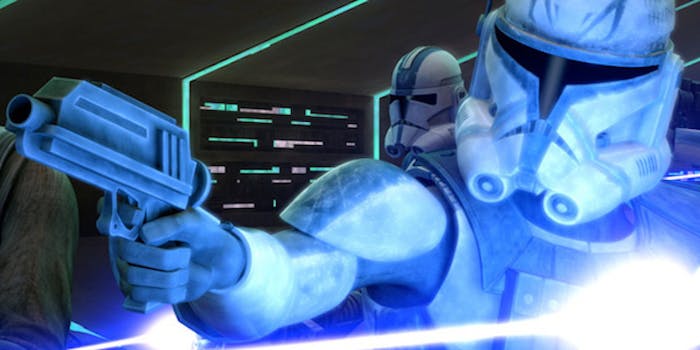 Netflix will stream the final season of ‘Star Wars: The Clone Wars’ in March

Fans of Cartoon Network animated series Star Wars: The Clone Wars received some happy news Thursday when Lucasfilm announced the sixth season would finally be released March 7. The final season’s 13 unaired episodes are being called “The Lost Missions” and will stream on Netflix in the United States and Canada. Along with the new episodes all 5 previous seasons, director’s cut episodes, and the feature film will also be released.

“Star Wars is one of the most iconic franchises of all time and this series joins a long line of Disney content that Netflix members are and will continue to enjoy for years to come,” Netflix chief content officer Ted Sarandos said on the Star Wars Blog. “The Clone Wars marks an important moment as Netflix welcomes more and more first-run content from The Walt Disney Company and its subsidiaries.”

Last month fans of the show received word that at least one character, Darth Maul, would have their storyline wrapped up through a Dark Horse comic book series but that left many other story arcs unfinished. The show’s dedicated fandom has been letting their displeasure at its cancellation be known through campaigns like Save the Clone Wars. While some fans may still be disappointed that the show won’t be returning for good, overall people were excited that they will at least be able to binge on the series with new shows in less than a month.

“The Clone Wars cartoon series was everything the prequel trilogies should have been. Pretty excited for this,” wrote Tumblr user helms-deep.

Twitter was full of similar reactions, though fans outside of North America expressed their dismay that the shows will be unavailable to them for now.

Found out that the first 5 seasons of the Clone Wars are being added to Netflix in March. Already planning a marathon weekend.

@SaveCloneWars @starwars @dave_filoni @TheCloneWars Thank You for finally letting us know about the airing of the Lost missions! @netflix

I really need to get American Netflix before March 7th, Can’t friggin wait to binge on The Clone Wars new episodes

Thank you @netflix for singing a deal with @Disney/#LucasFilm to have @starwars @TheCloneWars streaming including “#TheLostMissions.”

If you can’t wait until March, get a taste of what’s to come in this clip: