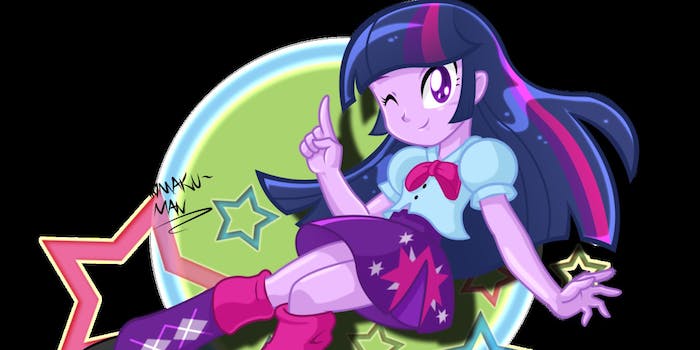 Why “My Little Pony” fandom is freaking out over “Equestria Girls”

When is a pony not a pony? When she's transformed into a teenage girl.

When is a pony not a pony? When she’s transformed into a teenage girl.

That’s the premise behind Hasbro’s brand-new My Little Pony: Friendship Is Magic spinoff, Equestria Girls. The movie, which premieres June 16, puts the beloved ponies under a spell that turns them all into awkward gangly girls for whom adjusting to their new bodies is a metaphor just waiting to happen. But while the concept may seem cute on some levels, the new trailer seems to have the entire My Little Pony fanbase alternately wincing and scratching their heads in confusion.

The most immediate question on everyone’s minds seems to be: “Who is this movie for?” While the fanbase is full of adults—you may know them as bronies—plenty of those adults treasure Friendship Is Magic‘s family-friendly style and don’t want to see it begin more overtly reaching out to the adults in its fanbase. Adults were never meant to be FIM’s core audience, and many fans don’t mind being accidental bystanders of a show meant for kids.

But good intentions aside, the FIM characters were already overtly feminized ponies whose thick-lashed round eyes and curvy bodies said “sexualize us!” to the many adult bronies who engage in “clopping.” That’s fapping, My Little Pony-style, in case you wondered. (If you don’t know what fapping is, then this is not the paragraph for you.) For many fans, the concept of turning adult female ponies into actual teenage girls seems like blatant pandering to straight male fans who didn’t need any assistance in that area.

Even more confusing is the news that Twilight Sparkle, the show’s main character and the one whose character path has undergone the most upheaval in recent seasons, is getting “a love interest” in the movie. Who is it? Spike the dog, shown briefly in the trailer making heart eyes at Twilight. How exactly is that supposed to work again? And is this a children’s movie or a 90-minute long nod to Furry fandom?

The minute-and-a-half-long trailer also seems to have a number of dreaded high school movie cliches, complete with sexist stereotypes like the mean girl and the battle for prom queen. It’s an alarming departure for a show that has been widely acclaimed for its positive portrayals of female characters.

“I’m not sure if I’m still drunk, or if this is actually real,” remarked one commenter on pony news site Equestria Daily the day after the trailer dropped. It’s a sentiment that captures the fandom reaction to the trailer in a nutshell: a mix of wary confusion and dry amusement over the entire concept.

The backlash over the film has been so severe that yesterday Equestria Daily issued a scolder to the entire fandom for taking their negativity out on the animation studio behind the film, DHX. Citing rumors that DHX staffers were quitting or thinking of quitting. The ED staff pointed to the Twitter hashtag #thankyouDHX as a way of showing support for the studio and the film.

But many bronies weren’t up for a lovefest. “Like hell we can keep calm, EqG goes against everything that Pony was trying to prove,” commented FCBacon.

Part of the Brony complaint is that this will be one of the first Friendship Is Magic plots not originally created by the show’s creator and fandom queen Lauren Faust. And it shows. One Reddit thread alleges that Equestria Girls is a corporate attempt to compete with Mattel’s “Monster High” doll line. On her Twitter, Faust herself may have obliquely commented on the brouhaha by tacitly comparing it to the watering-down of Mattel’s famed “American Girls” line over time.

But on Tumblr, where fan reaction was generally more hopeful and positive, the people coming under fire were the bronies themselves. “I mean I can understand having low expectations, that’s totally fine,” remarked Tumblr user mizuki-takashima.

But saying EG ruined FiM 4ever? No. Saying that the girls are ugly because holy crap they’re no longer equines??? NO. Crying misandry because Spike is a dog? No.

Also bronies have been begging for a male character in MLP that the girls could become friends with but but but he’s ATTRACTIVE and might be a potential LOVE INTEREST so suddenly he’s icky!!!

“I sense a pattern here,” noted Redditor 8bit_phoenix, pointing out that the actual product of new My Little Pony developments was never as dire as the bronies imagined it beforehand.

Meanwhile, rumors of DHX staffers and Hasbro employees receiving death threats, while probably greatly exaggerated, indicate that whatever the outcome of this newest pony adventure, the intense love this fandom has for the characters of Friendship Is Magic isn’t going to die down any time soon.