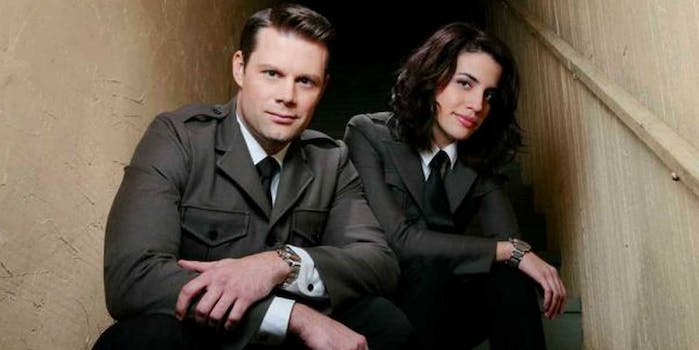 ‘The Middleman’ will get a reboot thanks to fans on Indiegogo

ABC’s The Middleman was cancelled after just one season, but it’s not dead yet.

ABC’s The Middleman was cancelled after just one season, but it’s not dead yet.

Like Veronica Mars’ ridiculously successful Kickstarter movie, The Middleman has turned to crowdfunding to give fans the content they’ve been asking for. As of October 1, the cult sci-fi series has begun to raise funds on Indiegogo, headed up by writer/creator Javier Grillo-Marxuach.

The Middleman originally began as a graphic novel, but the TV series was where it really kicked off. Featuring an unlikely hero in the form of Wendy Watson, a young artist who accidentally gets hired by a secretive Men In Black-style agency, it was packed with geek-culture references and guest appearances from Comic Con favorites like Kevin Sorbo and Mark Sheppard. Fans loved it for its mixture of snappy dialogue, Bechdel test-defying female characters, and weird geek trivia — but its viewing figures on the ABC Family channel were never very good.

Five years after the show was cancelled without a proper finale, Middlefans are still looking for closure. Grillo-Marxuach may have moved on to other projects (SyFy’s Helix), but according to his Indiegogo video, people have never stopped asking him when there’s going to be some new Middleman on the horizon.

The campaign is halfway to its goal after a single day, with the ultimate aim of re-releasing the comic book series, plus a final volume that ties the TV series and the books together. The original cast will reunite for a live reading of the book, with guest star Amber Benson (Buffy the Vampire Slayer’s Tara).

This may not be quite the same level as a Firefly reboot, but The Middleman is a prime candidate for a fan-funded resurrection. Middlefans are as enthusiastic as ever, with tickets to the live reading quickly selling out. It’s just too bad we won’t get to see that cast reunion until May 2014!