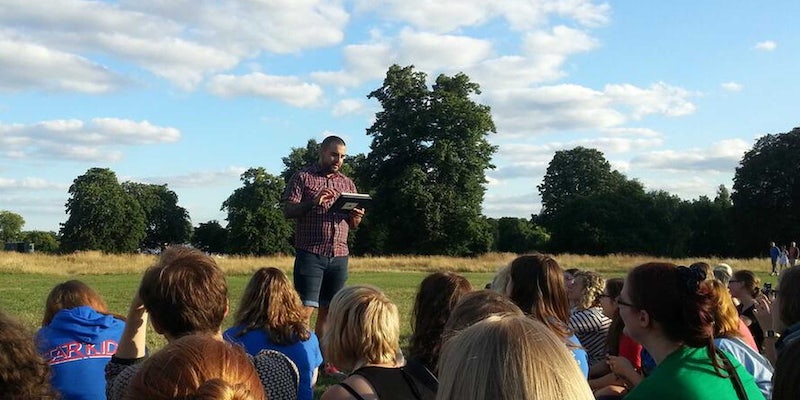 Mark Oshiro has come a long way since he read “Twilight”

Mark Oshiro has become his own franchise by reading and watching pop culture with no preconceptions.

Mark Oshiro is the first person I’ve met who has his own TV Tropes page. Of course, he’s also up for a Hugo award, but for some reason the TV Tropes thing is what sticks with me.

Oshiro is the author of Mark Reads and Mark Watches, a “one-man book club” where he reviews iconic series like Harry Potter, Buffy and Doctor Who without knowing anything about them beforehand. He’s enormously spoiler-phobic, but that’s how his readers like it. Basically, they enjoy watching him freak out when he reaches the point in the story that made them freak out in the first place.

His first series of reviews was about Twilight (which he hated), his second was Harry Potter (which he loved), and the rest is history. Right now he’s on tour, attending various conventions in between speaking engagements for Mark Does Stuff.

I meet up with him at LeakyCon London, the U.K. branch of the largest Harry Potter convention in the world, where all three of his panels are full to capacity.

“This is the first time I’ve ever had to turn people away from something,” he says, understandably excited. Earlier in the day I tried to get into his Mark Reads Fanfic event (which is more or less what it sounds like), and almost crushed someone when I tried to pry open the door.

I’m interested in the fanfic thing, because when the Daily Dot last spoke to him, Oshiro mentioned how psyched he’d be if anyone wrote fanfiction for his own (as-yet unfinished) novel. Mark Reads Fanfic is popular at conventions because reading badfic aloud is undeniably hilarious, but Harry Potter fandom introduced him to the high points of fanfic as well. “Doing Mark Reads and Mark Watches has exposed me to how much good fanfiction there is out there,” he says, when I ask if there are any Mark Reads-style fanfic reviews on the horizon. “I did all of the Shoebox Project and read the whole thing aloud.”

The Shoebox Project is a novel-length Harry Potter story set during the 1970s, when Harry’s parents were still at Hogwarts. It’s hilarious, it’s very well-written, and it will make you cry. It was also Oshiro’s first introduction to long-form fanfic, so his expectations have been set kind of high. If you want to give him any fic recommendations, they’ll have to measure up to the 104 YouTube videos it took for him to record the entirety of the Shoebox Project from beginning to end.

I ask which book or TV show had the greatest emotional impact on him, expecting him to say Harry Potter. This is LeakyCon, after all, and he just spent an hour reading fanfic to a room full of Mark Reads fans.

In fact, the answer is Friday Night Lights.

“It’s interesting because I got to open up about growing up in a football family. How obsessed my family was with it, but how I could never connect with them about it. I just wasn’t into that masculine display of sports, I just wanted to read and write poetry and all those sort of things. So I went into Friday Night Lights knowing I liked Connie Britton and Kyle Chandler and hearing that it was a great show, but I was super terrified I’d hate it.”

In the end, he had nothing to worry about. “I can’t believe how many times it’s made me cry. It’s rough.” Oshiro is now a huge fan of Friday Night Lights, but I’m kind of dubious over whether I’d watch it myself, despite his glowing recommendation. How accessible is it going to be to a British nerd who knows more about Quidditch than about football? But in fact, Oshiro was in exactly the same boat. “I would say I knew more about Quidditch than football before I watched the show. But the way that it analyzes sports culture and all the ways that it puts people off – the show has entire plotlines just about that idea.”

This kind of unabashed enthusiasm is an interesting product of the journey Oshiro has traveled since he first started writing Mark Reads Twilight. The blog was originally set up as an in-joke among his colleagues at Buzznet, but when it got popular, his editor made him keep going. That was unfortunate for Oshiro because he seriously hated Twilight, but good news for the rest of us because he kept writing afterwards. It’s just as well that Harry Potter was his next project, because it transformed the blog from being a kind of cynical, mocking look at bad writing, to a more fanboyish analysis of books that he could genuinely love and respect.

Now, he ends up becoming a legitimate fan of almost everything he reads and watches for his blog, because his readers suggest things that they already know he’ll enjoy. “It’s like human Goodreads,” he explains. And apparently, his fans don’t spoil him. At all. Which is kind of impressive, considering the nature of Internet trolling.

“I restrict what I read online, so I won’t know extremely basic things. Like, sometimes I’ll watch shows and I won’t even know where it’s set or what genre it is at all. So the only spoilers I’ve had to deal with are people saying ‘this is sci-fi’ or ‘this is a character.’ It’s never anything that ruins the experience.”

Since Twilight, Oshiro is happy to note that “nothing has ever reached that level of negativity,” partly because his readers genuinely want him to have fun enjoying the books and movies they love. “Even if I ultimately don’t like something, if it’s not my cup of tea, it’s so much more fun to approach it in a way that gives the story a chance. So I’m glad I did Twilight first and got it out the way, because it’s sort of reframed everything that came afterwards. I think if I read Twilight now, I wouldn’t have had as much fun with it. I think I’d just be depressed and sad, like, ‘I just read twenty awesome novels and now I have to read this?’”

“I think starting at the bottom, with one of the things I disliked most, meant I could shoot up to Harry Potter and then stay on this level of awesome books. I’m glad it happened in that order.”

Also, Mark Reads has helped him become a better writer. His growing genre-savviness is an ongoing theme of Mark Does Stuff (thanks, TV Tropes!), and analyzing so much popular media has helped him understand which tropes he wants to put in his own book. “I think it’ll be neat that there will be [Mark Reads-style blogs] about my own stuff. I’ve talked to a lot of the authors that I’ve written about, and it’s not often that authors can get really in-depth feedback about all the choices they made in their novel. Being able to analyze literature the way I do, it’s given me a lot more confidence in my own writing, because I know the things I like and the things I want to subvert. I could not have written this novel years ago.”

“Out of all the things I’m doing, that’s the thing I’m most excited for.”

Aside from his book, I’m curious what’s in store for the future of Mark Does Stuff. As it turns out, the answer is everything. Can he really be reading all the Tamora Pierce novels? Yes, all the Tamora Pierce novels. The entire Discworld series? Yes, the entire Discworld series. All of Supernatural? Yes, all of it. Also, at some point in the future we can expect a Mark Watches for all of Star Trek. As in, every episode of Star Trek that’s ever aired.