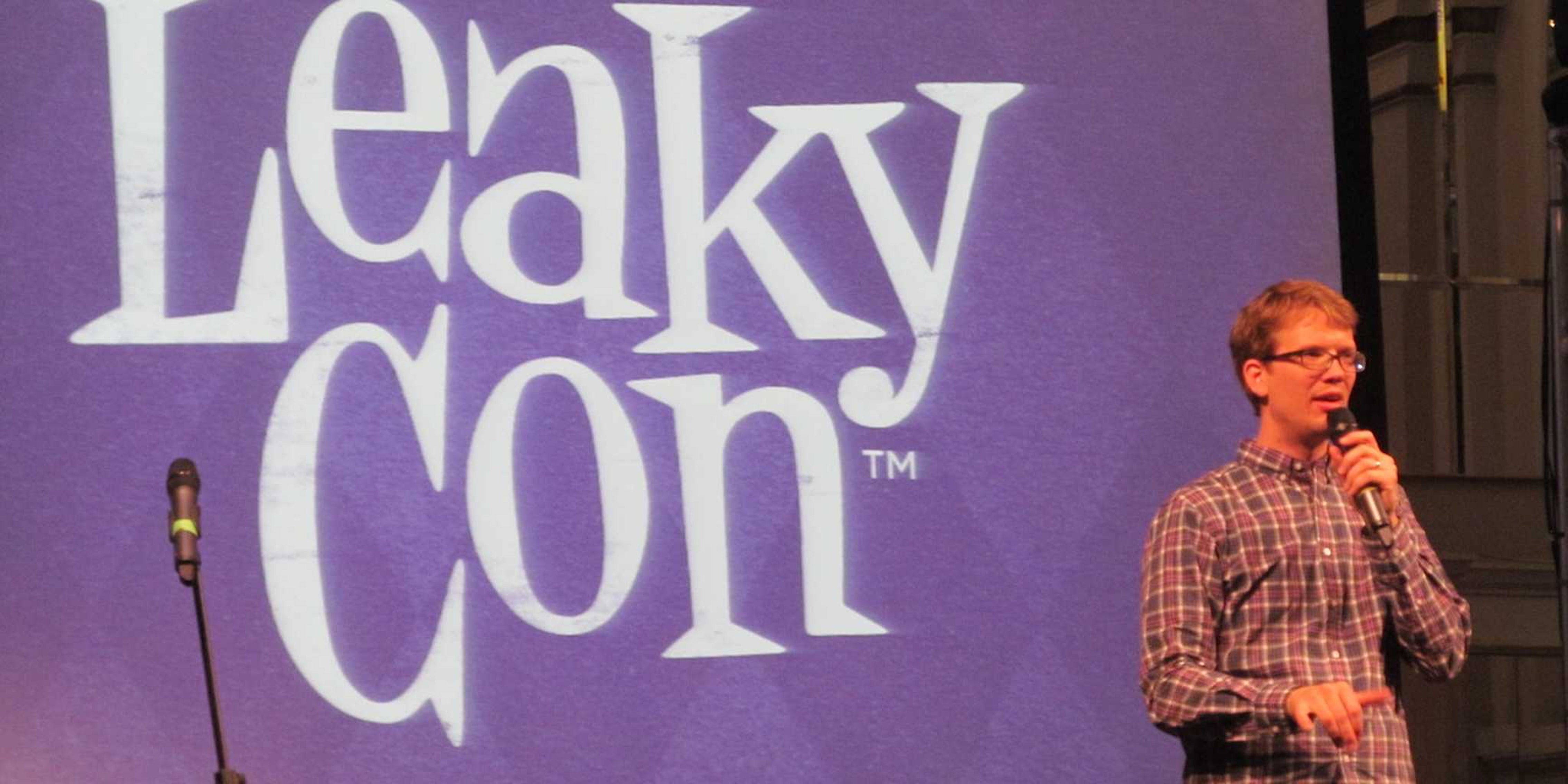 At LeakyCon, Hank Green is bigger than Harry Potter

LeakyCon is technically a Harry Potter convention, but the entire weekend is more like one big Nerdfighter gathering.

People tend to get worried when they see large crowds of teenagers getting excited about something. And when it’s a large crowd of teenage girls, that worry is usually tinged with more than a hint of scorn. What are girls into these days? Twilight, One Direction, Justin Bieber? Something terrible, anyway.

Actually, no. This weekend, I was in the middle of the biggest group of teenage girls I’ve seen since I actually was a teenage girl, and that crowd was excited about two things: Harry Potter and Hank Green.

One half of the Vlogbrothers, Hank Green is the founder of VidCon, the co-creator of a vlogging subscription service called Subbable, and the host of an educational YouTube show about science. He’s also a huge Harry Potter fan, which explains why he was one of the special guests at this weekend’s LeakyCon London convention. There’s a big overlap between Harry Potter fans and the Vlogbrothers community (known as Nerdfighters), to the extent that over a thousand people showed up to the Nerdfighter gathering at LeakyCon.

And yes, most of them are teenage girls.

Hank Green is there, looking surprisingly well-rested for a guy who was at VidCon in California less than a week ago. Everyone in the hall has paid to see him speak at 10 a.m. on a sunny Friday morning in the middle of summer vacation, and he starts his hour-long Q&A with a short speech about charitable donations raised by Nerdfighters and the Harry Potter fandom. I want to mail footage of this to every old dinosaur who says teenagers don’t care about anything; every editor who greenlights another article that reduces underage fangirls to an amorphous gaggle of horny idiots.

The audience demographic at the Nerdfighter gathering is pretty much identical to that of the convention in general: 95 percent women and girls, with an average age of about eighteen. In the evenings after late-night events at LeakyCon, there are a lot of moms waiting outside the building to pick up their daughters, most of whom seem to be dressed in a near-uniform of Hogwarts school ties, flower crowns, collectible Harry Potter convention ribbons, and converse hi-tops. You don’t realize that “socially aware, gregarious bookworm” is a distinct subculture until you’re surrounded by 1,500 of them. 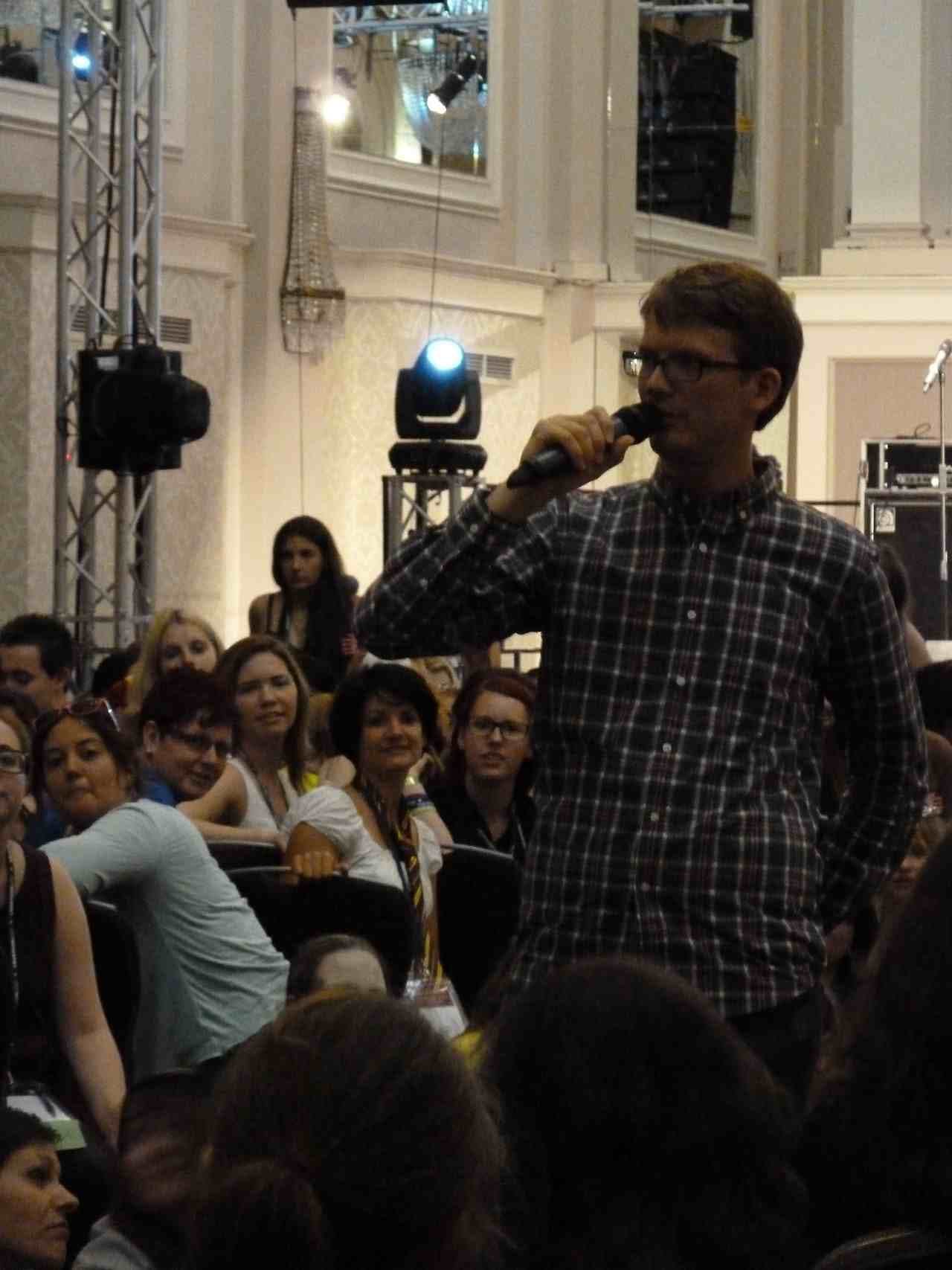 LeakyCon is technically a Harry Potter convention, but the entire weekend is more like one big Nerdfighter gathering. Everyone is almost superhumanly fresh-faced, friendly, and considerate, and there’s more crying and hugging than at your average airport arrivals lounge. In a lot of cases, this is the one time they’ll get to meet their best friends in real life.

Yes, everyone here may be a huge Harry Potter fan, but the focus is on the fan-made community rather than the books or films — which, at this point, have been talked to death anyway. The celebrity guests (mostly young actors from the later Potter movies) are given a warm welcome, but the most excitable receptions are definitely awarded to Hank Green, the Wizard Rock band Harry and the Potters, and Starkid, the creators of the YouTube smash hit A Very Potter Musical. Starkid perform several times over the weekend, and the hall is packed to capacity every time, deafening screams almost drowning out their set-list of catchy, witty Harry Potter showtunes.

At major-league geek events like San Diego Comic Con, tales of stars walking the convention floor are reported with breathless disbelief. (Hugh Jackman went out in Wolverine costume and no one recognised him? Oh my god!) But at LeakyCon, Hank Green dances in the audience at a Harry and the Potters show, and the actor who played a teenage James Potter organizes an impromptu yoga class in one of the empty rooms. There’s barely any need for security, with crowd control being taken care of by volunteers—also mostly teenage girls. After five or 10 minutes of talking about Bill Gates, charity fundraising, and malaria, Hank Green turns the Nerdfighter gathering into a Q&A for the next hour, and hops off the stage into the middle of the crowd.

Question one is about Alice, John Green’s new baby. Question two turns into a fart joke. Question three is about Edward Snowden. Then we move on to 3D printing, vlogging advice, the dubious usefulness of higher education in today’s economic climate, the ethics of celebrity Kickstarter campaigns, and Benedict Cumberbatch. It’s ridiculously eclectic, and probably the first time I’ve been to a major fandom speaking and not heard someone ask a stupid question.

And so, here’s a rundown of some of the things we learned from Hank Green at LeakyCon’s Nerdfighter gathering:

Towards the end of the Q&A, someone asks Green about his favorite Harry Potter character. He says it’s Luna Lovegood, eliciting one of the loudest cheers of the morning. At LeakyCon (and among Nerdfighters) Luna and the actress who played her are always going to be hugely popular. Evanna Lynch was a dyed-in-the-wool, fanfiction-reading Harry Potter fan before she was ever cast in the movies, and she reprised her role in the final Starkid musical, A Very Potter Senior Year.

As Hank Green points out, Luna typifies all the qualities found in Nerdfighters themselves: bookishness, enthusiasm, and an ability to care deeply about things that most people don’t understand or believe in. Combine that with Evanna Lynch’s image as an active participant in fandom, and you have an explanation for why there were at least twenty people at LeakyCon wearing Luna Lovegood glasses, but only one person noticeably dressed as Harry Potter himself.