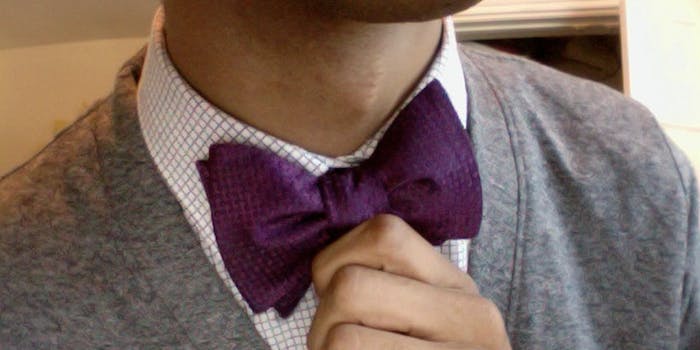 A feminist geek idol is accused of using his influence to get close to underage girls.

What do you do when a man you look up to, a man whose outspoken feminism and respect for women had enraptured an entire community of fangirls, sends you pictures of his dick?

What do you do when you tell him you’re underage, and his response is, “It’s legal in my country”?

Sweet-bitsy’s Tumblr idol had a formidable fandom thanks to his YouTube performances, selfies in bowties, and a fashionably geeky Internet persona. For nine months, she cringed every time she saw his name. Finally, she took a chance and told Tumblr her story.

As sweet-bitsy predicted, all hell broke loose. Victim-blaming backlash (“Because of people like you, the song ‘Blurred Lines’ exists”) flooded her inbox. And then something remarkable happened: She found she wasn’t alone.

Given that Tumblr is the Internet’s domain of sobbing teens and swooning fangirls, it must be a strange experience for any 20-something dude who finds himself becoming a minor YouTube sensation and Tumblr celebrity—with his own mini-fandom.

But Josh Macedo, known well for his outspoken rants on feminism and other social justice causes, is at the center of a whole new aspect of Tumblr fame: what might just be its first sex scandal.

On his blog, confusedtree, Macedo comes across as a smart, polished, and genteel geek:

I am a man of simple pleasures. I drink coffee, I like post-modern literature, wearing suits, attractive people and beers after work and more than anything in this world I want to adopt a guinea pig and name it SPEED METAL

In Tumblr language, he’s what we might sum up as eminently GIF-able, and before Friday, the Josh Macedo tag on Tumblr was full of fangirls and fanboys declaring their love, making GIF sets of his face, and even cosplaying him—a favor he returned when he took a turn playing Cecil from Welcome to Night Vale.

But on Sept. 13, sweet-bitsy dropped a bombshell about Macedo when she published an exchange she allegedly had with him in February, when she was 15. In the exchange, the username Josh Macedo flirts with the user, who eventually confesses that she’s underage. He responds, “I just want to do sexual things with you, as long as that’s legal.” (The Daily Dot cannot independently verify these exchanges.) After she protests that she doesn’t think of him that way, saying, “I really am not ready for a relationship or even sexual things with anybody!” he responds, “I had figured that with the flirting and stuff that [you’d] actually kind of like that,” referring to hearing about his sexual fantasies about her.

Writing about the incident later, she expanded:

But when she faced the inevitable backlash and harassment from his fans, she was surprised to find more women, including Macedo’s former girlfriend, sharing similar stories. A picture formed of a man who may have used his feminism as a predatory weapon to solicit sexual activity from young women on Tumblr.

When other supporters of Macedo chimed in to question sweet-bitsy’s story, other Tumblr users came forward with separate claims, though in most cases they were vague and seemed to boil down to allegations of Macedo having sent unsolicited nude images to multiple users. In the case of rupsidaisy, the claims were less concrete: “I got creepy replies on my selfies too,” she said, screencapping a Tumblr post of an apparent selfie. Amid other replies of “gorgeous girl” and “HOLY SHIT DAMN GURL,” Macedo replies, “frick.”

“[H]e was very uh sexual without any prompting whatsoever with me soooo lols,” echoed Tumblr user littlestbug, who stated she was 17 at the time. (The post has since been deleted.)

Tumblr user nyaanchuu, who emphasized she was an adult at the time of the interactions she had with Macedo, shared screencaps of a text interaction she had with him, in which Macedo allegedly goes off on his own sexual fantasies about her while she remains silent and does not respond.

“I felt I had to keep up appearances, as I had been so flirtatious before,” she said.

Finally, a woman who claims to have dated Macedo during the summer of 2012 came forward Saturday, after reading sweet-bitsy’s post and those posts by other girls, to share a number of things that made her uncomfortable both before, during, and after their relationship. (She requested we remove a link to her blog.) Macedo, she claims, pressured her into the relationship by always turning their conversations sexual, a pattern that continued after their relationship began:

He’d tell me everything was going to be okay, try to calm me down and then he’d continue doing sexual things even though he could tell I was uncomfortable.

In the middle of describing how she felt Macedo routinely pressured her to engage in sexual activities that made her uncomfortable, she relates how she discovered that Macedo “had TONS of photos of naked and semi naked girls” on his computer:

but he just had… tons of girls’ photos saved there

The one thing that seems to be a recurring theme in all the accusations and allegations is that Macedo frequently makes friends with young, attractive women among his fanbase and makes them feel uncomfortable—and although no one else has coming forward to share proof that Macedo sent them sexually explicit images, that hasn’t stopped Tumblr from rapidly changing its tune about its love for Macedo. “[W]help josh macedo turned out to be a pedophile/sexual predator,” wrote shovelingsnoooow. “[T]that kinda puts a damper on my night.”

Still, plenty of fans are eyerolling. “He’s just a 24-year-old dude who likes to talk dirty to pretty girls on the Internet,” wrote ashleyintransit, adding: “SENDING SOMEONE DICK PICS DOES NOT MAKE YOU A RAPIST… Just because that person is a teenager DOES NOT make you a rapist!!”

But while Macedo may not have broken any laws in his own country (and may be innocent), Canada hath no fury like a Tumblr scorned. The most infuriating part of all to Tumblr users seems to be the ease at which Macedo ingratiated himself to Tumblr culture despite Tumblr’s environment of pro-feminist, anti-misogynist culture. As traversetowndistrict put it:

Josh was a funny little kid. There was no reason to believe that he was a sex maniac…. The reality is that Josh was like any other typical nice guy. The type of nice guy that claims to be 100% supportive of women and their rights, but then turns around and verbally harasses them every chance they get imminently followed by “why are you getting so offended?? im a nice guy!!

A common defense of the misogyny that runs rampant through geek culture is that socially awkward guys are so clueless around women that they can’t help but overstep their boundaries. Macedo’s story in this context is typical: A geek boy, an outsider, unaccustomed to interacting with so many women in geek spaces, lets a gluttony of attention cloud his judgment, leading to a litany of offensive behaviors.

Of course, the idea that simply being surrounded with available and attractive women is enough to create inappropriate behavior in a teen or adult male—Macedo is 24—one that blames the women in those spaces for simply being there. The answer to the problem of Tumblr harassment is clearly not “remove all the women from Tumblr.”

Rather, what makes Tumblr culture such a safe space for women might ironically be the thing that made it so easy for Macedo to wear the “disguise” of an enlightened geek boy. When you frame yourself as an outside-the-establishment liberal who understands the struggles that women face, it puts you in an elevated, respected position—and it becomes easier to abuse your power in the community.

Macedo, who has not updated his Tumblr since Sept. 13, did not respond to a request for comment. Meanwhile, masterposts and the new Tumblr wellgoddammitjoshmacedo have been compiling the Macedo scandal, and the comments on his inbox page are currently flooded with angry notes from Tumblr users.

“WE WON’T FORGET WHAT YOU HAVE DONE,” reads one, “and tumblr won’t let you forget it either.”

Update: On Saturday, Sept. 20, Macedo deleted the contents of his blog, though the Tumblr itself is still there. He has not returned a Daily Dot request for comment.