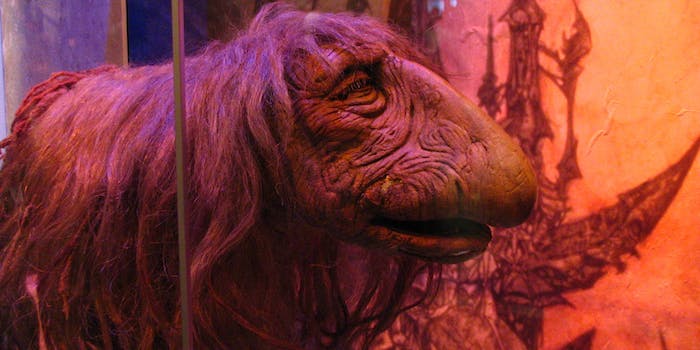 The Jim Henson Company has partnered with Penguin to offer fans the chance to compete to publish a new series tie-in novel to the 1982 cult classic The Dark Crystal—to the tune of a $10,000 publishing contract for the winner.

While the contest, dubbed Author Quest, doesn’t ever explicitly mention fanfiction, it’s all there in the details—with a discussion on how to navigate within someone else’s world—

and it’s not quite what it appears.

Have you captured the essence of The Dark Crystal in a way that will please the fans while also infusing the story with your own style and personality? Have you told a story that can withstand the test of time and forever be a part of The Dark Crystal canon?

The contest draws strict parameters on the timeframe and the story setting. The Dark Crystal takes place before the conjunction of the universe’s three suns, on the eve of the extinction of a race whose internal clashes have permanently divided them. The contest, however, is set in the previous era many years before that, so fans who want to write the continued adventures of Jem, Kira, and Fizzgig might be disappointed. They will, however, have the chance to craft entirely new characters and delve into the epic fantasy worldbuilding of Henson and co-director Frank Oz.

On the surface, the Henson/Penguin contest seems far less exploitative for fans wishing to profit from fanfiction than Amazon’s recently unveiled fanfic publishing model, Kindle Worlds. While there’s no word about royalties in the official rules, the $10,000 prize is somewhat better than what most writers would make for a single franchise tie-in novel like this one, either as an advance or profit after royalties. It’s definitely better than Amazon’s 35 percent royalty offering on digital publications selling for a few bucks each.

The contest also takes care to emphasize quality and writerly craft over the appeal of a quick, easy publication process: entrants have between three to six months to write, polish, and submit their stories before the Dec. 31 deadline.

But there are some red flags, sadly familiar ones to fans who’ve seen similar contests like this one from other corporations looking to engage fans while also pilfering their creativity. Participating in the contest requires you to state that your work is fully derived from the Dark Crystal film, and give up any and all rights to your story. This holds even though the contest’s own emphasis on a prequel setting, original characters, and new plots means that the best entries will almost certainly be arguably transformative works over which the author should legally be allowed to maintain their own copyright.

Instead, the Jim Henson Company may legally be able to take your work and profit from it, even if you don’t win the contest or prize money:

“By competing in the Contest and/or accepting a prize, each entrant (including the prize winner) grants to Sponsors the right to edit, adapt, publish, copy, display, reproduce and otherwise use their entry in connection with this Contest and in any other way, in any and all forms of media now known or hereafter devised, throughout the world, in perpetuity.”

The “or” in this clause means that even if the company doesn’t deem your work good enough for a contract, they could still take your ideas, characters, and even your entire entry and use it in their franchise whenever they want.

As attempts to engage fans in the publishing industry continue to proliferate, fans are already seeing numerous examples of this “work for hire” scenario. It was just this sort of exploitative contract between Alloy Entertainment and L.J. Smith, the original author of the Vampire Diaries, that allowed the corporation to unceremoniously fire her from writing her own novels in 2011, after two decades and seven books.

In a post-Fifty Shades of Grey publishing environment, it seems that more and more corporations are attempting this disingenuous courtship of their fans. The Organization for Transformative Works, a fan-run nonprofit, is usually quick to alert fans to the mercenary qualities of such contests–but as they grow in number, they get harder to police.

Still, with its $10,000 prize, the Henson Company’s approach may seem like a fair shake to many fans—the closest thing to a rainbow connection between fans and the story they love.