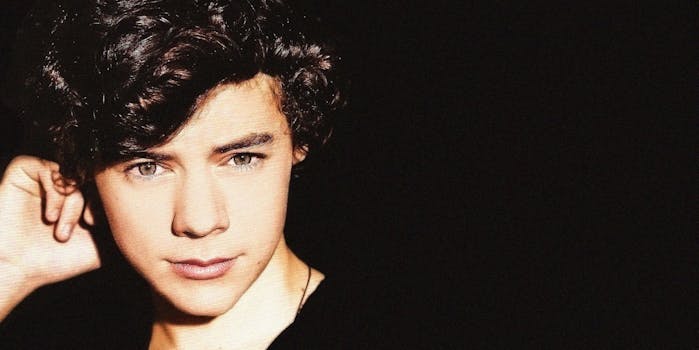 It’s One Directioners vs. GQ, and no one wins

The hyperbolic utterance of death threats seems to have become, for better or worse, a normal part of Directioners' language.

This week, GQ magazine unveiled five special covers designed to tap into one of the world’s largest cultural phenomenons around: One Direction fandom. What they got instead was a backlash of epic proportions. It’s par for the course when you’re dealing with the devout and loyal fans of Harry Styles.

GQ put out different editions of the monthly magazine, one for each of the five 1D heartthrobs. But while Gentleman’s Quarterly may have been trying to court the band’s legions of female fans, when it came time to interview the performers, its lad mag instincts took over. For the band’s most famous face, Harry Styles, they accompanied the photo with the legend, “He’s up all night to get lucky.” They followed it up with an interview in which they teased Styles about the number of people he’d slept with, prompting him to declare they were “cornering” him.

GQ‘s regular readership might have smirked and turned the page. Directioners, however, reacted as if someone had dumped pig’s blood on their best friend at prom.

“Warning: the following article contains serious abuses of Caps Lock,” snarked GQ when they posted the follow-up earlier today. After disingenuously leaving out the fact that most of the outrage against the magazine came from the interview questions directed at Styles, the magazine simply listed a sampling of tweets from fans, many of them death threats. The tweets made Directioners appear to be bubbling over with inexplicable, hysterical rage.

The truth is much more complicated. The relationship of Directioners to their beloved band members is more like that of an artist to a beloved muse than that of a cult of obsessive stalkers. Fans also have personalized that relationship to such a degree that when GQ dared to sully Styles’s purity, they not only insulted the fandom muse, they said mean things about their best friend Harry.

“The [nosiness] of some people *cough* magazines *cough* makes me wanna go aggressively question my mother on how many people she’s slept with,” griped Tumblr user pissoffzayn in response.

Others went a bit further.

“Do these rumours feel at all intrusive?” THE RUMOURS ARW INTRUSIVE? HOW SBOUT YOUR CUNTY JNTERVIEWER I WILK SHOOT U https://t.co/ASPmuwtBzb

The hyperbolic utterance of death threats seems to have become, for better or worse, a normal part of the language of expression for Directioners—but GQ, doubtless unfamiliar with the language of fandom on Twitter and Tumblr, seemed genuinely baffled.

Naturally, both the ouroboros of rage from Directioners and the bemused gawking of GQ‘s regular audience hasn’t hurt the magazine’s hit count any. And as we’ve seen many times in the past when the press and the outside world crosses paths with Directioners, implying that teenage girls are crazy seems to be the easy way out.

Still, we can’t help but want to take the 1D fandom by the hand and remind them that even if Harry Styles really had slept with 500 people, he’d still be a delightful, frothy-haired cupcake worthy of respect.

Just like the fans themselves, no matter what GQ thinks.