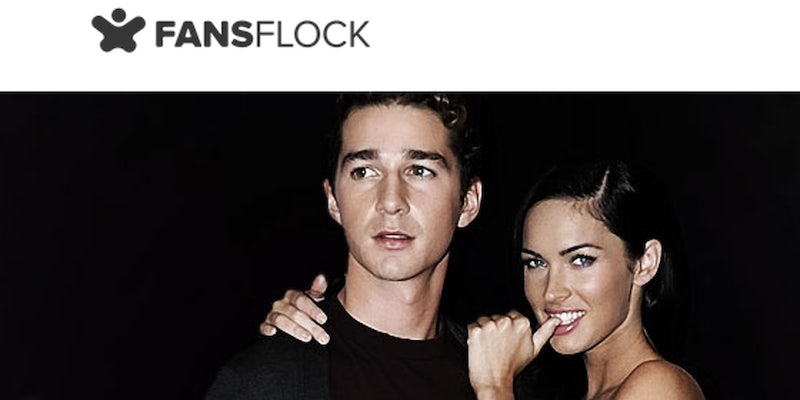 Does Fansflock have what it takes to be fandom’s Kickstarter?

If Fansflock can increase creator and copyright-holder tolerance for fanworks, it would be a win-win for everyone.

Fansflock wants to be Kickstarter for your Doctor Who fanart. The site hopes to distinguish itself from other contemporary crowdfunding sites by appealing to the Tumblr crowd, focusing on projects that have fandom connections—either because they’re connected to a popular fandom franchise or because they’re run by fans creating the projects themselves.

The site’s creators told Upstart Business Journal recently that they intend to use the platform to “harness the energy fans feel toward sports, brands and celebrities … to sell the fan experience.”

They have their work cut out for them: The “fan experience” is one that thrives on free exchange and outpourings of love. You might compare the act of fan-based fundraising to poetry: It’s the spontaneous overflow of powerful fan feelings—recollected as you’re reaching for your wallet. It’s that sense of spontaneity and togetherness that has led many fan-spurred projects to be incredibly successful, from Veronica Mars to Homestuck and its offshoots to the Lizzie Bennet Diaries and many more. Often, how successful a project is depends on how much fan loyalty its creators have accrued, either from a direct connection to the current project they’re working on or from a long history of producing successful projects.

Still, there’s one thing that many other crowdfunding sites don’t have: a tolerance for potentially infringing fanworks. That’s the most exciting thing Fansflock offers fans—but it could become a source of contention. Fansflock spokeswoman Ronjini Mukhopadhyay explained via email the site would be heavily curated to ensure that the kinds of campaigns that go on the site are above reproach—or at least above merit for a copyright takedown notice:

“Fansflock is heavily curated and goes through an official approval process for each campaign for this very reason. We will have a team that will work to verify and make sure our campaigners know the policies and the regulations around copyrights, so that they do NOT infringe or post campaigns that will be contentious.”

When asked to name a potentially safe kind of fan campaign, however, Mukhopadhyay gave a somewhat confusing answer. “Fans are encouraged to create fan projects for established brands,” she wrote. “While the platform would not approve a new type of gadget, [it] would approve a fan-made Star Wars T-shirt.” But even if Fansflock gives the thumbs-up to a fan-made Star Wars T-shirt campaign, it’s likely that the notoriously litigious George Lucas would not.

Further examples of potential fan projects listed on the website seemed infringement-free but limited in scope: “a picnic to screen the latest indie movie, a flash mob to support a favorite recording artist, or a tailgate party for their team.” These kinds of fan events are safer, but few of them are likely to need crowdfunding, unless your picnic is taking over Central Park or your tailgate party lasts the duration of the Olympics.

The kinds of projects that need crowdfunding tend to be creative ones. Unfortunately, fan creative projects are the ones most likely to succumb to the kind of copyright takedown notices that plague YouTube, where takedown notices come first and questions get asked later.

If Fansflock can increase creator and copyright-holder tolerance for fanworks, it would be a win-win for everyone. Creator Massimo Colella told Upstart that the secret to winning corporations over was to apply peer pressure. “I’m pretty sure that the official brand owners, they have to follow their fans,” he stated. But if major corporations like Lucas Films followed their fans, The Last Airbender wouldn’t have sported a main cast of white people, Disney princesses would have actual facial expressions, and no one would be in doubt that Han shot first.

Mukhopadhyay reiterated that Fansflock’s priority is supporting fans, though she cautioned that it’s “up to the campaigners to ensure the legality of their copyright usage.” Without a clear division between fan-created projects that fall within fair use and copyright-protected projects from creators that draw on fan support, it’s difficult to know whom Fansflock is serving. It’s also unclear how the Miami-based business can entice larger corporations if it’s simultaneously supporting fan-created projects that such corporations feel threatened by, whether or not they should.

“We want this to be a social platform where fans from all over the world can support each other and come together virtually to make dreams become a reality,” she said.

It’s a nice vision, but it sounds like Fansflock needs to more clearly define its stance on copyright issues before the fans it wants to woo will feel safe enough to flock.