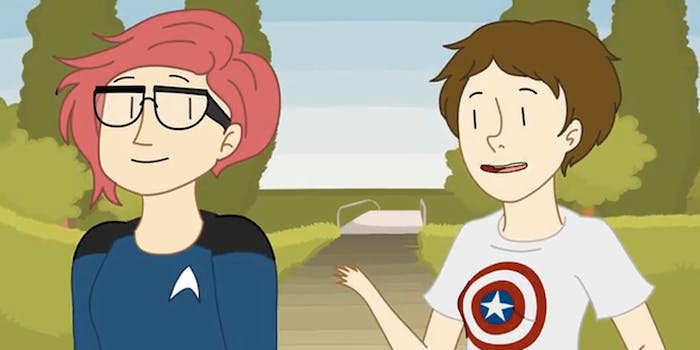 Fangirls don’t check their fandom at the school door

I'm writing my thesis on Supernatural.

If you’re a teenage fangirl, this video will speak to your soul. I definitely tried to sneak Lord of the Rings references into every history term paper. I turned in Everwood fanfiction as an English assignment. I wrote about boybands for a college psychology class. Because if you’re truly obsessed with a pillar of pop or nerd culture, how can you possibly leave that at home?

This hilarious YouTube animation by Leigh Lahav and Tom Trager chronicles the trials and tribulations of a fangirl in school. One girl tries to make her thesis sound like it’s about Judeo-Christian and pagan elements in modern media, but another calls her out, “So you’re writing about Supernatural?” Another reads Sherlock fanfiction in class, telling her teacher, “It’s a totally legitimate form of story-telling.” A teacher tells another fangirl that the Lannisters from Game of Thrones don’t count as “royal dynasties of medieval Europe.” Ha!

Lahav’s YouTube channel is full of short animations about the lives of fangirls. They are all super on-point and hilarious if you’ve ever been or known an obsessed fangirl.

She also makes nerd parodies like Peter Capaldi cursing up a storm as the Doctor from Doctor Who and a Thor/Loki comedy called “Thorested Development.”

They’re all great. Check them out and get your daily dose of feels.