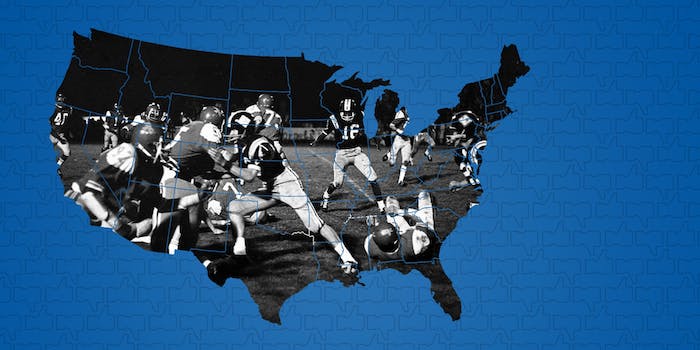 Just in time for the first week of the season, Facebook has created a map of users’ most-liked college football teams.

Or, well, a stunted version of it. It could have been a data-driven version of Reddit‘s r/CFB’s map, which tries to show the favorite teams every corner of the country. But unlike Facebook’s much more informational NFL map, which shows how all 32 teams are liked in every county, this one is culled from the AP 25 preseason rankings.

That means that only 25 of the 125 Division 1 college football teams are represented. And as any college football fan knows, preseason rankings usually have little to do with how the season shakes out.

A good number of the nation’s most popular teams, like Alabama, Oregon, and Notre Dame, have started in the top 25. No one would be surprised to learn that all of Ohio likes Ohio State, or almost of all of Texas likes Texas, more than any other team in the top 25.

Still, the map shows a few interesting results. For instance, there’s nowhere in the country, not even the middle of Los Angeles, that chooses UCLA. (Southern California is firmly USC country.) And five different teams suffer a clear case of little brother syndrome, where they’re the most popular team in their own country and maybe one other, but are otherwise surrounded by fans of a bigger program: Clemson, Stanford, TCU, Texas A&M, and Oklahoma State.

Otherwise, the map is best to show where bandwagon fans weirdly congregate where there isn’t a football powerhouse. There are no schools from the northeast in the top 25, so the most popular ranked team in New England is Florida. Who knew?