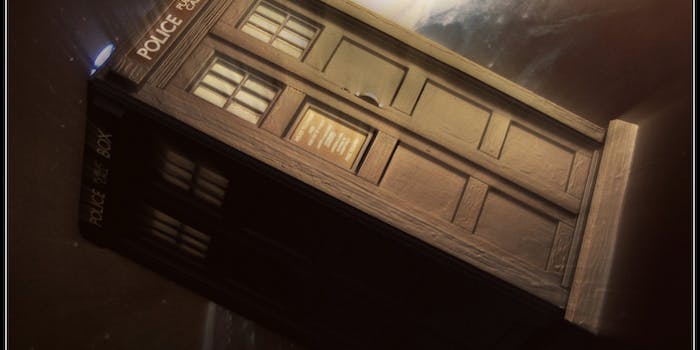 ‘Doctor Who’ fans want a TARDIS at the White House

This year marks the 50th anniversary of the beloved BBC sci-fi series Doctor Who, and the show’s diehard fans are sure to celebrate the milestone—to be commemorated in the U.K. with 20 or so hours of programming and a special feature-length episode—in every possible fashion. But one online petition is seeking to get the highest powers in U.S. government in on the fun.

The document, posted on We the People, the White House‘s petition site, states its author’s aims very succinctly. “We petition the Obama administration to: Place a replica TARDIS on the White House Lawn for a week before the 23 November 2013 50th anniversary special.” TARDIS is an acronym for “Time and Relative Dimension in Space,” an extraterrestrial craft disguised as a 1960s London police box that has transported nearly a dozen different Doctors through the universe and history.

“This year,” the petition reads, “the long running show Doctor Who is celebrating 50 years since it first aired. We would like the U.S. to acknowledge this show and our friendship with the good people of the U.K. by placing a replica TARDIS on the lawn of the White house for a week prior to the 23rd of November 2013.” Bear in mind, this isn’t just to drum excitement for the show: “We feel this will spur a healthy interest in Science and Technology while bringing many people around the world together.”

As of right now, the TARDIS display may be a low priority for the White House, though Obama may be just enough of a nerd to sign off on it. (We have a feeling that the show never really “clicked” for Biden, episodes featuring weird puppets excepted.) In any case, we’re nearly 99,000 signatures away from the petition’s finish line, so the Whovians have their work cut out for them.

Then again, their hero does tend to leave crucial matters until the last possible moment.