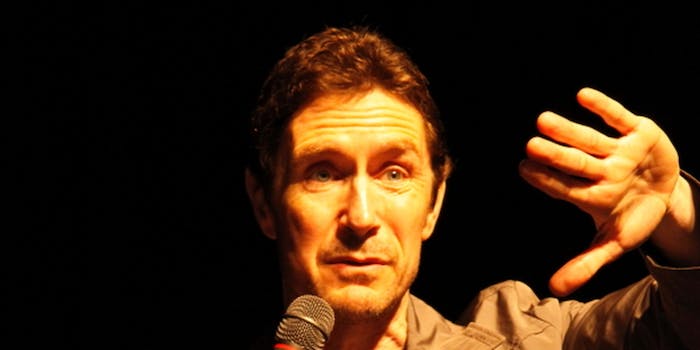 ‘Doctor Who’ fans discover a new obsession with Paul McGann

He only starred in one movie, but now the Eighth Doctor is getting the fan love he deserves.

In the eternal divide between fans of the classic Doctor Who of the ‘60s and ‘70s and fans of today’s “New Who” lives the career of a single man, a man whose trip in the TARDIS lasted only a moment.

And thanks to the Doctor Who 50th anniversary, he’s finally back in the spotlight.

Seventeen years ago, Paul McGann’s turn as the Eighth Doctor lasted only for the duration of a single attempt to revive the series, the lackluster 1997 Doctor Who: the Movie. Here’s a fan edit of the movie that by all accounts is far more exciting than the actual film:

Though fans praised McGann’s outing as the Doctor, the movie failed to create a lasting impression, and it wasn’t until showrunner Russell T. Davies rebooted the series in 2005 that Whovians got their long-awaited revival.

But on Sunday, Doctor Who’s 50th anniversary special featured a surprise roster of older doctors, including McGann, who at 54 is still a year younger than Peter Capaldi, the latest choice to play the role. McGann turned so many heads in Sunday’s 90-minute special that he’s almost upstaged Capaldi’s choice as the new doctor.

As the time for the anniversary special drew near, the BBC released “The Night of the Doctor,”  a “minisode” starring McGann.

When fans saw it, Change.org exploded in petitions calling for McGann to return as the Doctor. After the 50th anniversary episode, “The Day of the Doctor,” finally aired, one Change.org petition requested that current showrunner Steven Moffat create a series of Eighth Doctor adventures. It collected more than 16,000 signatures.

McGann has stayed involved with the franchise. He’s recorded various BBC audiobooks as his character, and voiced the Doctor in a brief animated spinoff. But despite Eight getting frequent attention from cosplayers, McGann himself has flown largely under the radar with fans. Until now.

“I can’t put into accurate enough words how much I want to see Paul McGann get at least one proper series of him as the Doctor,” Tumblr user machobat wrote earlier today. “He was always a mystery to me, the mysterious Eighth… And with Night of the Doctor giving him his end…I want to know what else happened.”

Meanwhile, the new Tumblr Is Paul McGann Hot? informs new McGann fans that “Yes, he is,” and professes its dedication to chronicling “the sudden mass realization that paul mcgann is a very attractive individual.”  It’s full of people coming to the conclusion that McGann, with his sprightly ways, muppety hair, and whimsical charm, is, in fact, hot.

And then there are those fans who’ve been in on McGann’s secret all along. “Fifty years of magic and this beautiful Victorian/steampunk, curly-headed mop, romantic, waist-coat wearing dandy is the only Doctor I would shag,” sighed amberleewriter. “Has been since the first time I saw him on a big screen.”

Fans hoping that the resurgence of interest in McGann will lead to more episodes featuring him as the Doctor aren’t likely to see their wish granted, however. “There is one Doctor and that’s who he is. He’s one man with many faces, he’s not a committee of people with unusual hair,” Moffat told press at London’s ExCel convention Monday. Moffat explained that despite the anniversary special gathering multiple doctors together, following this it’s back to the routine of all one doctor, all the time.

Of course, that doesn’t mean that McGann’s role is over. Given Moffat’s penchant for rewriting Who backstory, and occasionally resetting the number of regenerations the Doctor can have, it’s not a far-fetched idea to have him guest star in future eps. After all, given the mechanics of time travel, it’s a wonder no Doctors have ever bumped into each other before now. And if the two most recent doctors, David Tennant and Matt Smith, can carry an episode together, we’re pretty sure that putting McGann and Capaldi together would be a win for everyone.

Given that the 50th anniversary scored Who’s highest ratings in years, with 11.8 million total viewers and the highest ratings of any BBC America broadcast in history, maybe it’s time to bring back McGann on a more permanent basis.

Lovers of curly-haired steampunk dandies would thank you.