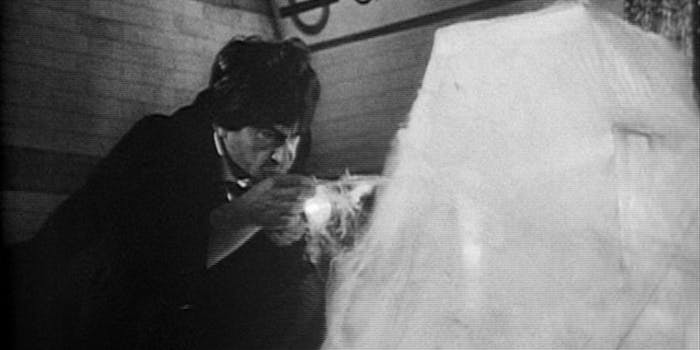 Details of ‘Doctor Who’ #MissingEpisodes spread before midnight reveal

Two long-lost Doctor Who serials are expected to be released on iTunes tonight.


I wonder how many minutes after midnight it will be when the itunes site crashes? #DoctorWho #MissingEpisodes

If you’re a Doctor Who fan, you’ve had a big year—between the naming of the Twelfth Doctor and the 50th Anniversary Special, fans have a lot to be cheerful about.

But it’s tonight at midnight that Whovians might just have a party to end all parties—when a number of the show’s fabled missing episodes—maybe that should be Missing Episodes to emphasize their importance—will reportedly find their way back into the Doctor Who canon after decades lost to time and urban legend.

Fans of the new Who are out of luck when it comes to accessing much of the older series; in the ‘60s, the BBC chucked most of the episodes, unaware they were throwing away a cultural heritage. Rumors have been circulating for years that the missing episodes would eventually, er, regenerate. But in the past week, Twitter’s #missingepisodes tag has gone haywire as rumors and then confirmation surfaced that in the coming days the BBC would be announcing that, after huge expense and painstaking negotiations with hundreds of private individuals who owned copies of the episodes, they are now back in the BBC’s possession.

Earlier today, numerous blogs began reporting that tonight at midnight, the BBC would announce the recovered titles and begin streaming a handful of them for viewing on iTunes.

While an embargo was allegedly in place, that didn’t stop the outlets from teasing fans with the possibilities.  But then British news site Northern Echo briefly broke the embargo, sending floods of Who fans to the site before they yanked their piece, which listed titles and described the haul that lies in wait tonight. Several copies of the deleted story are now making the rounds on various social media sites, all reporting that the first two restored episodes fans will view tonight are part of the fifth-season serials “The Web Of Fear” and “The Enemy Of The World.”

Both “Web of Fear” and “The Enemy of the World” are six-part serials. Prior to their recovery, each one was missing five of its six parts. “Web of Fear” introduces two monsters—one of which, the Great Intelligence, new Who writer Steven Moffat recently brought back to the show. Perhaps he knew this episode was on the way back as well.  From the allegedly embargoed Northern Echo article:

Fiona Eastwood, director of consumer products, BBC Worldwide, said: ‘‘We are thrilled with the recent discovery of The Web Of Fear and The Enemy Of The World and we’re very happy to be launching re-mastered versions of these treasured episodes to fans as we celebrate the 50th year of Doctor Who.’’ The BBC still had the first edition in the Web Of Fear story, and the new finds mean only number three is missing.

The article states that the BBC’s international program director Phillip Morris started the recovery process by unearthing shipping records that helped them figure out where the episodes had gone. Both serial episodes are missing the third installment, which the BBC has recreated using archive still images and the original audio of the episode. 27 episodes of the show are still lost, and may never be recovered—but hopefully tonight’s unveiling of the episodes to the public will make future recovery efforts easier.

Posting earlier today, Doctor Who website Outpost Skaro blogged that the haul was “worth the wait,” but admonished members of fandom for the long months of wild rumors, cynicism, and rampant speculation:

But there is one important thing to say: it was confirmed to me that the rampant speculation and personal attackes that has been going on [sic] in some quarters of fandom has made the acquisition more difficult. …. I think we need to… back off a little, and enjoy and [celebrate] what we get. Cos it is bloody marvellous.

Hopefully, midnight will bring a respite from the rumors—and an early Christmas for Who fans.