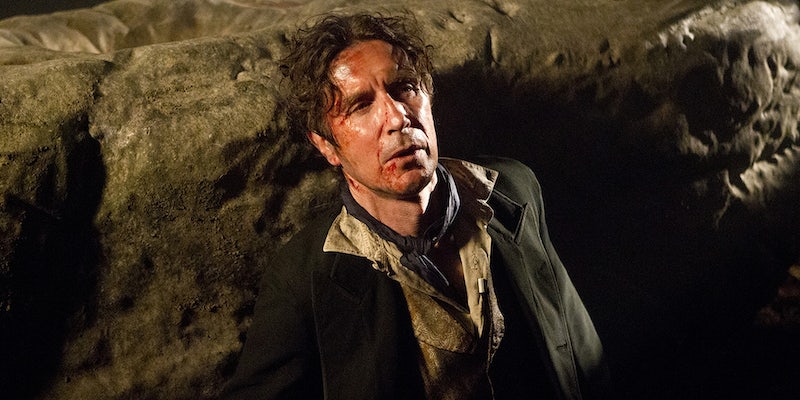 ‘Doctor Who’ fans dissect tantalizing ‘minisode’ ahead of 50th anniversary

The return of an old Doctor spurs wild speculation about the upcoming 50th anniversary bash.

If you’re a Doctor Who fan, you’re probably used to wishing you had a time machine. But right now, Doctor Who fandom has a very specific time travel destination in mind: Nov. 23, 2013, the day when the 50th anniversary special airs on TV and in movie theatres across Britain.

Until recently, the most anyone had seen from the episode were a few promotional images and a rather embarrassing YouTube video advertising the “official” episode hashtag. (Yes, an ad for a hashtag.) Then last week, an interview came to light where Doctor Who alumnus Colin Baker implied that the 50th anniversary special was ignoring the “classic” Doctors in favor of 21st-century stars like Matt Smith and David Tennant.

Referring to himself and two of the other surviving Doctor Who stars, Paul McGann and Peter Davison, Baker said, “None of us have been deemed worthy of inclusion in a program that celebrates fifty years… we are surplus baggage.”

Showrunner Steven Moffat is a highly controversial figure in fandom, so it’s no surprise that some people were quick to jump on Baker’s interview as proof that Moffat was taking the 50th anniversary special in what can only be described as a Moffat-centric direction. Quotes from the interview quickly spread across Tumblr, alongside comments such as:

“Can people see now that’s it’s not just some people on tumblr who are upset about this? It’s the actual actors from the show you all claim to love, being shunted aside for Moffat’s wank fest.”

However, at least one part of Baker’s statement has already been proven to be totally false, because Paul McGann just reprised his role as the Doctor in an online “minisode” prequel to the anniversary special.

McGann is mostly known for playing the Doctor in a 1996 TV movie that represented a brief (and possibly mistaken) foray into adapting the show for an American audience. Since then, the Eighth Doctor has appeared in 72 audio plays recorded for BBC radio, meaning that he certainly hasn’t been forgotten by the show’s core fanbase. Still, no one was expecting him to show up in connection to the 50th anniversary special, particularly since he’s far from being one of the iconic Doctors like Tom Baker.

guys, even the eighth doctor returned before sherlock series 3.

To say that fandom is freaking out would be putting it mildly. First of all, there’s the fact that Paul McGann’s reappearance means that maybe, just maybe, a bunch of other old Doctors might end up having cameos in the anniversary special after all. Secondly, this minisode confirmed that all the audio plays are official canon, settling years of dispute among Whovians.

Last but definitely not least, one of McGann’s scenes proved that it’s totally possible for Time Lords to change sex when they regenerate. This means that just months after casting yet another man as the next Doctor, Steven Moffat has decided to admit that it’s canonically plausible for the character to become a woman at some point. It’s just too bad that McGann’s Doctor decided to regenerate into a “warrior,” which apparently meant he had to become John Hurt rather than the Helen Mirren casting some people were hoping for.

With just over a week until the anniversary special airs, it’s genuinely astonishing that no major spoilers have yet been leaked. In other words, there’s still time for the show to prove Colin Baker wrong: maybe there will be some cameo appearances from other vintage Doctors.