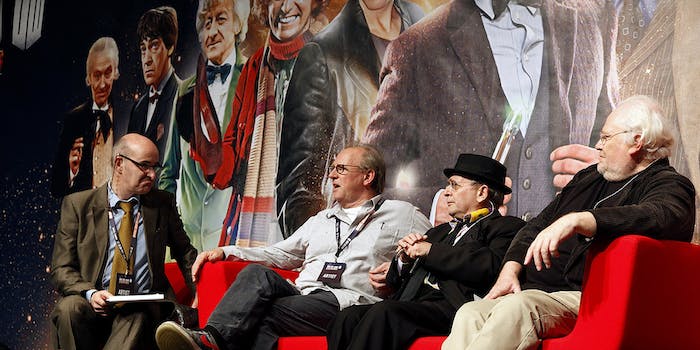 Rounding up the best rumors about the ‘Doctor Who’ anniversary special

With the announcement of the Twelfth Doctor earlier this year, most fans thought that Doctor Who casting spoilers were a thing of the past. Not so much. Thanks to the Doctor Who 50th anniversary special, airing worldwide in less than 24 hours, the Whovian rumor mill is going into overdrive.

Fans have been speculating for months over just how many classic characters will show up this weekend’s special episode. Pretty much every big name in the show’s 50-year history has been brought up, but only a handful have appeared in trailers for the episode—and almost all of them are characters from the 21st century Doctor Who reboot.

Bearing in mind that the 50th anniversary episode is only 76 minutes long, there is no way most of the casting rumors can be true. That being said, it seems like there may well be more classic Doctors showing up than we previously thought. Last week, a “minisode” was released, starring the comparatively obscure Eighth Doctor, played by Paul McGann. This effectively put paid to the assumption that there would be no classic Doctor cameos at all, a rumor that was causing some dissention among the ranks of old-school Whovians.

While former Doctor Who star Colin Baker recently gave an interview where he implied current showrunner Steven Moffat had abandoned past Doctors in favour of his own new characters, a recent comment from (spoiler alert!) Fourth Doctor Tom Baker seems to contradict this entirely. Speaking to the Huffington Post, he said:

“I am in the special. I’m not supposed to tell you that, but I tell you that very willingly and specifically; the BBC told me not to tell anybody but I’m telling you straightaway.”

Basically, Tom Baker is the worst nightmare of the notoriously spoiler-averse Steven Moffat. He just does not care about these newfangled spoiler embargoes. That being said, this kind of information leak can only be good news for the episode, because the Fourth Doctor, with his long, multicolored scarf, is arguably the most iconic of the classic series. The biggest question right now is whether he’ll look like present-day Baker (a 79-year-old man, now), or be given a CGI facelift to look like he did in his 1970s heyday.

The other major rumor to show up Friday is yet another hint that one of the show’s infamous lost episodes may have come to light. Fifty years ago, the BBC had no idea that Doctor Who would become the institution it is today, and literally taped over many of the only copies of early episodes. Every once in a while, rumors will resurface that some of those deleted episodes have been found, and this time it’s a 7-episode serial called “Marco Polo,” which originally aired in 1964. So far, the BBC has only give its typical response: that they “cannot confirm” any rumors of reappearing episodes.

Unless there’s a seriously catastrophic last-minute leak in the BBC’s spoiler embargo, all we can do now is sit around playing with Google’s 8-bit Doctor Who doodle until the episode actually airs. And perhaps peruse this list of possible 50th anniversary cameo spoilers from Tumblr user benpaddon, including “characters” such as Windows 8, Snoop Lion, Green Day, and “a swarm of bees.”