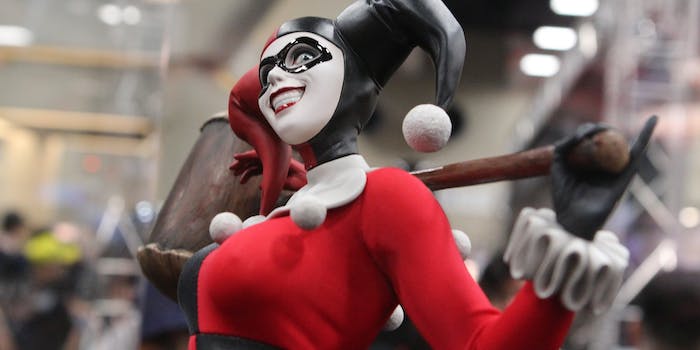 Fans of DC Comics must be starting to wonder if its many recent PR problems aren’t deliberate self-sabotage.

Fans of DC Comics must be starting to wonder if its many recent PR problems aren’t deliberate self-sabotage.

It’s been less than a year since the artist-driven Hawkeye Initiative gave female comic fans a chance to ridicule the objectification of female characters in comics. It’s also been less than a year since Anita Sarkeesian’s Tropes vs. Women in Video Games series pointed out the long and storied tradition of women being treated as disposable in gaming. This itself comes more than a decade after DC’s own Gail Simone first coined the term “women in refrigerators” to describe the long list of women in comics who’ve been violently killed or maimed in order to provide a story’s male hero with “manpain.”

But DC’s latest art contest, featuring popular villain Harley Quinn, they’re offering lucky artists the chance to begin their careers in the industry—if they can effectively draw a naked woman preparing to kill herself. This seems, at the very least, tone-deaf.

The contest comes on the eve of National Suicide Prevention Week, and many comics fans are outraged.

Harley Quinn is one of the most popular—and arguably one of the most sexualized—female characters in DC’s deck. A member of a covert group of villains called Suicide Squad, she currently works for the U.S. government. The four panels DC wants fledgling artists to draw all depict Harley courting death. Panel 2 shows her hanging out in a crocodile pond, Panel 3, sitting happily in the mouth of a whale. But the final panel is both grim and blatantly sexual:

Harley sitting naked in a bathtub with toasters, blow dryers, blenders, appliances all dangling above the bathtub and she has a cord that will release them all. We are watching the moment before the inevitable death. Her expression is one of “oh well, guess that’s it for me” and she has resigned herself to the moment that is going to happen.

When comics fans on Tumblr discovered the contest this morning they were immediately incensed. “In order to participate in DC’s latest talent search, you have to draw a female character committing suicide naked,” wrote kstipetic. “I’m gonna assume I don’t have to explain what’s fucked up about this.”

“I feel like there should be a PANEL 5 specification where you have to draw Harley walking into a refrigerator and closing the door behind her,” echoed kviri.

Kstipetic encouraged artists to create their own “submissions” and flood DC with them. Theyatagarasu commented, “I’m reversing the gender later Hawkeye Initiative style and encouraging people to do the same. Also, suicide???? How fucking horrible.”

But a baffled thebigomastar pointed out that suicide is a rather obvious choice for a member of the Suicide Squad, while genocider-cabbage opined:

I don’t see the problem with this tbh. Harley Quinn is fucking crazy to begin with, and it seems to me she never actually pulls through with any of these suicides? I mean it’s just a fictional character in a fictitious universe. Who cares?

But DC’s move comes after an onslaught of conversations and controversies within the past few years around the topic of misogyny in geek culture, from women getting shamed in comic stores to #1ReasonWhy and the effects that systemic sexism in geek industries have on real women. Harley Quinn doesn’t exist just on her own terms, but as a representation of DC’s attitude towards its female characters. And the contest is essentially serving as a job application, with DC wanting its artists to be able to successfully draw and objectify nude female bodies.

On the DC Comics blog announcement, Seairra Willett expressed her discomfort directly to the contest creators:

I’m a sequential art student, and I find it a bit appalling that the requirement for panel 4 is essentially drawing a female character committing suicide naked. The sexualization of suicide is something I will not be putting effort into for a talent search. I’ll let the other fanartist draw naked Harley in a bathtub. I’ll gladly draw anything but sexualized characters and suicide scenes for a very well-developed character.

Meanwhile contest collaborator Jim Palmiotti allegedly got defensive with one fan who complained, then deleted his thread.

“Its done in chuck jones loony toons style [sic],” Palmiotti allegedly protested, although naked women looking “resigned” to their fate doesn’t exactly summon up Daffy Duck—and comparing them to animals probably isn’t the best way to endear yourself to an angry public.

It’s already been a rough week for DC fans. On Thursday, the creative team of Batwoman walked off the series after two years, citing editorial mismanagement and DC’s unwillingness to let heroine Kate Kane, a lesbian, get married to her fiancée. For an alarming number of fans, this seems to be the last straw, coming after what seems to be an endless cycle of DC alienating its readers, driving away writers and artists, and jettisoning beloved characters and storylines.

@drmrstheawesome @DCComics Agreed..At first seemed like things were firing on all cylinders and now? Only a single DC title on my pull list.

“Literally never paying for anything from DC ever again,” tumbled skiesofpluto.

On his blog, Stephen Harred had the last word–or rather the last draw. “Well, I submitted my entry. Sure hope I win:” 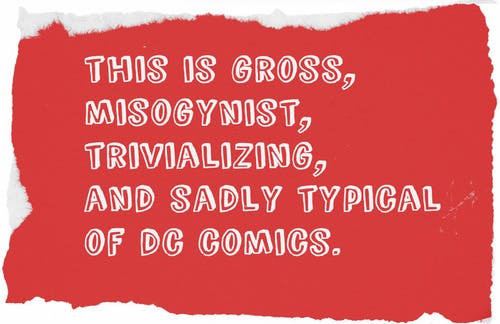 UPDATE: DC Comics issued a statement to the Huffington Post, apologizing for the contest and defending the panel in question as having been taken out of context.

“The purpose of the talent search was to allow new artists an opportunity to draw a single page of a 20-page story. True to the nature of the character, the entire story is cartoony and over-the-top in tone, as Harley Quinn breaks the 4th Wall and satirizes the very scenes she appears in,” the statement read. “DC Entertainment sincerely apologizes to anyone who may have found the page synopsis offensive and for not clearly providing the entire context of the scene within the full scope of the story.”