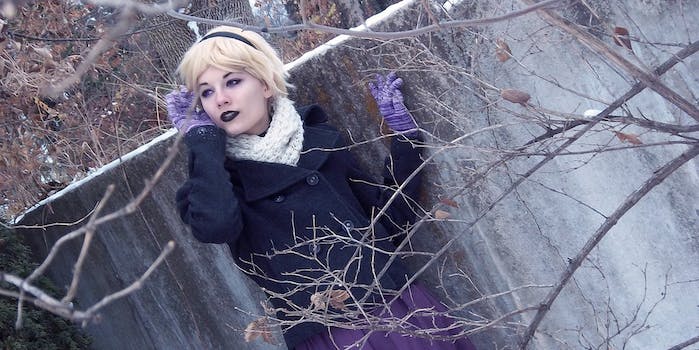 Cosplaying While Trans represents cosplayers across the gender spectrum

The hottest new site on Tumblr celebrates diversity and representation in the cosplay community.

After the success of Cosplaying while Black, a Tumblr that showcases the ins and outs—and occasionally the Dos and Don’ts—of cosplaying characters of all races, it might seem that Tumblr’s cosplay community has developed a well-defined way of talking about representation in media and ways to embrace non-majority cosplayers.

But along came Cosplaying While Trans, and one thing immediately becomes clear: there are no rules in cosplay, at least not when it comes to gender boundaries and gender binaries—or lack thereof.

Cosplaying While Trans (CWT) invites “all trans people, including trans women, trans men, non-binary people, and genderqueer individuals to submit their cosplays from their favorite media,” regardless of the gender of the character they’re playing.

CWT makes visible fans and geeks from every possible aspect of the gender spectrum—but perhaps the most immediately striking thing about CWT isn’t something visual, but rather something lingual. When people are empowered to self-identify their own designation, the descriptions you see cover everything from pangender to  “nonbinary and sort of a boy.”

Transgender people utilize a variety of pronouns from “he” and “she” to “they” and ey/em/eir.  And they cosplay everything under the sun. Gender-bending, androgyny, and “crossplay”—playing a gender opposite the one you currently identify with—are all normal parts of these fans’ cosplay experience.

Created last Thursday, Cosplaying While Trans made an immediate splash in the cosplay community, gaining more than 1,000 followers in its first day.

The creator, “Mod K,” describes the blog as one created out of frustration with the lack of available resources for the trans cosplaying community:

Recently, I decided to try to find a blog that showcased cosplays that were done by trans women only, hoping I could find some sort of inspiration for me, a trans woman who hasn’t done a cosplay since 2010 and wants to get back into it. I found none. I then tried to find a blog showing off cosplays done by trans people in general, yet found none. This is going to be that blog.

The community is also serving as a place for fans to discuss the marginalization they’ve experienced. Tumblr user relenawarcraft shared her story when she submitted her photo for the blog:

My name’s Sophia, and I’ve been cosplaying for eight years now, out as trans for five. I’m a transgender woman (ergo, she/her), and I’ve taken a lot of flak for it in the cosplay community, even after having been on hormones for almost four years. I still get called a trap, and deal with rude comments like “omg are you a guy???”. It’s ridiculous. But, I’m thankful this blog exists! I think it’s about time.

The cosplay community rushed to embrace the Tumblr, which may even be empowering some trans cosplayers to dip their toes back into scary waters. “I’ve wanted to do some cosplay again for years,” said Tumblr user zjhendryx when they reblogged CWT’s opening post, “but weirdly I’ve been scared to try it for a while (heck – I even freak out at ‘fancy dress’ nowadays).”

Added qunprince, “This and cosplayingwhileblack are literally the only cosplay blogs you ever need to follow.”