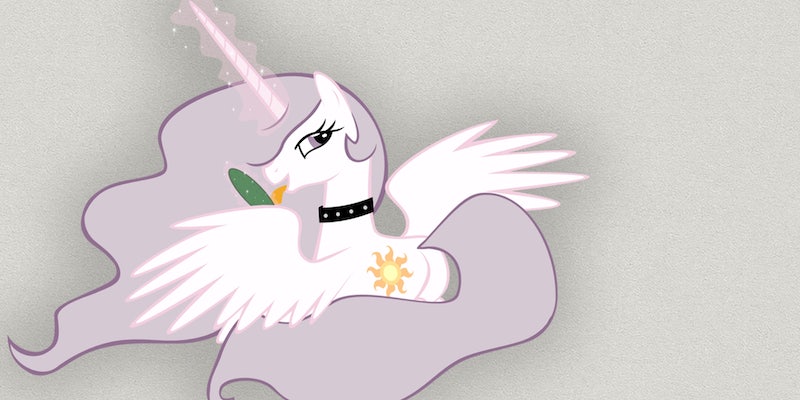 Princess Molestia appealed to adult pony fans, but some thought she was bad for the show's target audience: kids.

Tumblr, 4chan, and the bronies—fans of the animated series My Little Pony: Friendship is Magic—are facing off over a deleted pony blog and a flood of harassment directed toward a 17-year-old girl who may have influenced the takedown.

For three years, the brony roleplay blog Ask Princess Molestia existed on Tumblr as a parody of the My Little Pony character Princess Celestia. Molestia was so popular she had her own TV tropes page, her own wiki page, and her own mini-fandom with spinoff parody blogs.

But last week, after a cryptic final comment in which another character urged the main character to “press the big red button,” the blog vanished. Molestia’s creator, John Joseco, is claiming that Tumblr itself deleted the blog thanks to a copyright complaint from Hasbro—known for vigorously defending itself against anything that would tarnish the image of its popular ponies as kid-friendly.

The sharply divided reaction on and off of Tumblr illustrates the massive ideological divide that has formed between various types of bronies, and the odd way in which this children’s show has managed to bring liberal, feminist “social justice warriors” and fedora-wearing “men’s rights activists” (MRAs) together under one rickety fandom roof. 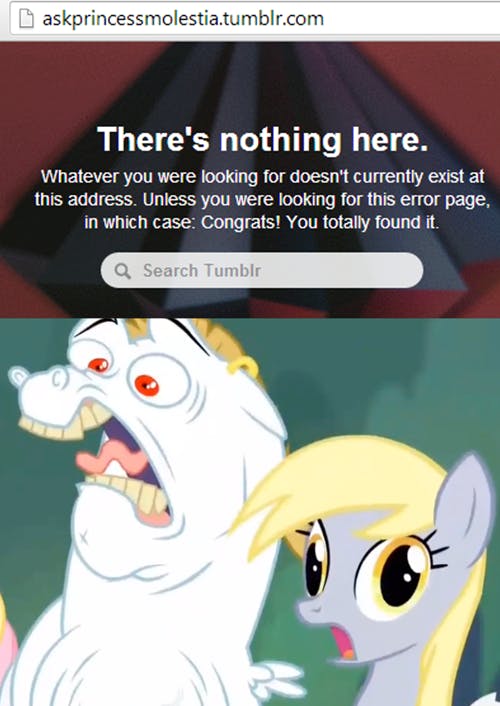 “An alternate version of Princess Celestia, differentiated from her canon counterpart by her pure lilac mane and her raging nymphomania,” reads the description for Princess Molestia on a wiki made for cataloging My Little Pony roleplay blogs on Tumblr. The contents of her blog, which—like most Tumblr roleplays—took the form of an “ask” blog with fanart responses, were highly pornographic. That’s not actually so unusual in the brony community, but Molestia’s penchant for throwing herself at anything with hooves (and sometimes without), combined with her name, made her a highly contentious topic within the fandom.

Especially vocal was a Tumblr user named pinkiepony, an alleged 17-year-old and lifelong pony fan who claims to have started the long-running brony movement called “Down With Molestia” after her 12-year-old sister ran across the blog while looking for harmless My Little Pony-related material.

“I don’t like a fandom for a little girl’s toys to be overrun by men who don’t respect women and think they run this town,” she wrote.

On Jan. 9, Pinkie emailed Hasbro about the Molestia blog. She noted that Hasbro never replied to her or acknowledged receiving the email in any way, but that it was possible that the email had an impact on Hasbro’s response and Tumblr’s decision.

The anti-Molestia movement had already made Pinkie a target for mockery within the brony fandom. She quickly garnered her own entry at noted troll site Encyclopedia Dramatica, which included her full name and other personal information. When pinkiepony’s campaign broadened to include “Ponies Against Rape Culture,” Mens’ Rights Activist bronies called her a “nazi.”

When angry bronies sought someone to blame for Molestia’s deletion, pinkiepony was an easy target.

Bronies have launched an intense harassment campaign against her. Among the forums spearheading the harassment campaigns is 4chan’s My Little Pony board, /mlp/, which has drenched her deviantArt account with criticism and allegedly flooded her inbox on Tumblr.

Online, they’ve claimed—with no evidence—that she’s lying about her age and that she is also a member of the white supremacist group Stormfront. They’ve mocked her extensively in posts compiling examples of her alleged hypocrisy for drawing suggestive pony art, and attacked her on parody and tribute blogs to Molestia, like inmemoryofmolly and ask-princess-mole-stia: 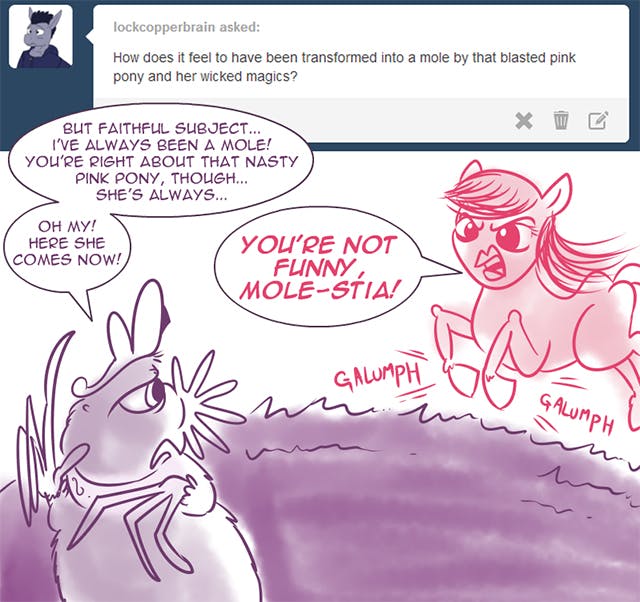 Offline, however, their tactics have proven a bit creepier: After using GPS coordinates from pinkiepony’s Twitter account, one brony allegedly had pizza delivered to her neighbor’s house.

“I’d reccomend [sic] you don’t take selfies with your phone,” Tumblr user Gigametallix wrote in response to Pinkie sharing the receipt for the neighbors’ pizza. Then he added:

“Look, I don’t condone harrassment [sic], a few pizza pranks are funny, rape/death threats are not. Also, to answer your question, [street address redacted], (And your parents’ names are [redacted] and [redacted]…).”

Yet for all the attention on pinkiepony, Hasbro could easily have been alerted to Molestia’s existence in other ways.

On Thanksgiving, one of the voice actresses for the show, Nicole Oliver, tweeted fanart from the blog, not realizing that it was a blatant sexual innuendo. The blog was rumored to have brought in about $1,000/month for its creator, and was popular enough to warrant a team of blog moderators, one of whom told Horse News that they chose not to fight for the blog’s reinstatement because they were ready for it to go:

“The blog got reported and taken down by someone and instead of fighting for it to go up again since we were close to closing it anyway, we decided the last strip worked surprisingly well as a goodbye. We’re going to see about putting up a downloadable archive in the near future.”

Noted brony prpltnkr made it clear they felt Tumblr was solely responsible for the takedown.

While the Daily Dot could not confirm at press time whether Tumblr actually took down the blog, multiple parody and imitation accounts using the word “molestia” were created in the wake of the deletion, only to be shut down.

“why bronies think people hate them: they watch a TV show marketed at little girls

why people actually hate bronies: they sexualize technicolor horses, they’re misogynistic despite the show’s feminist messages, they harass people, they think “coming out of the stable” is a big deal, rape jokes, they make everything about them, do i even need to go on”

“Dear Hasbro, Congratulations,” wrote whisski. “By taking down the Molestia blog you’ve stated there is a line that is not to be crossed and that the bronies do not own your children’s television show.”

But as the bronies were eager to point out, in the wake of Molestia’s departure, numerous other Tumblr accounts have sprung up, designed to make sure that her brand of parody mixed with risqué content carries on.

Ultimately, the combination of adult content and harassment in the fandom could alienate the very audience that MLP is meant for—children.

As call-out blog theshitbroniesdo stated, “The My Little Pony fandom is not safe for ITS TARGET AUDI[E]NCE. And that’s sad.”