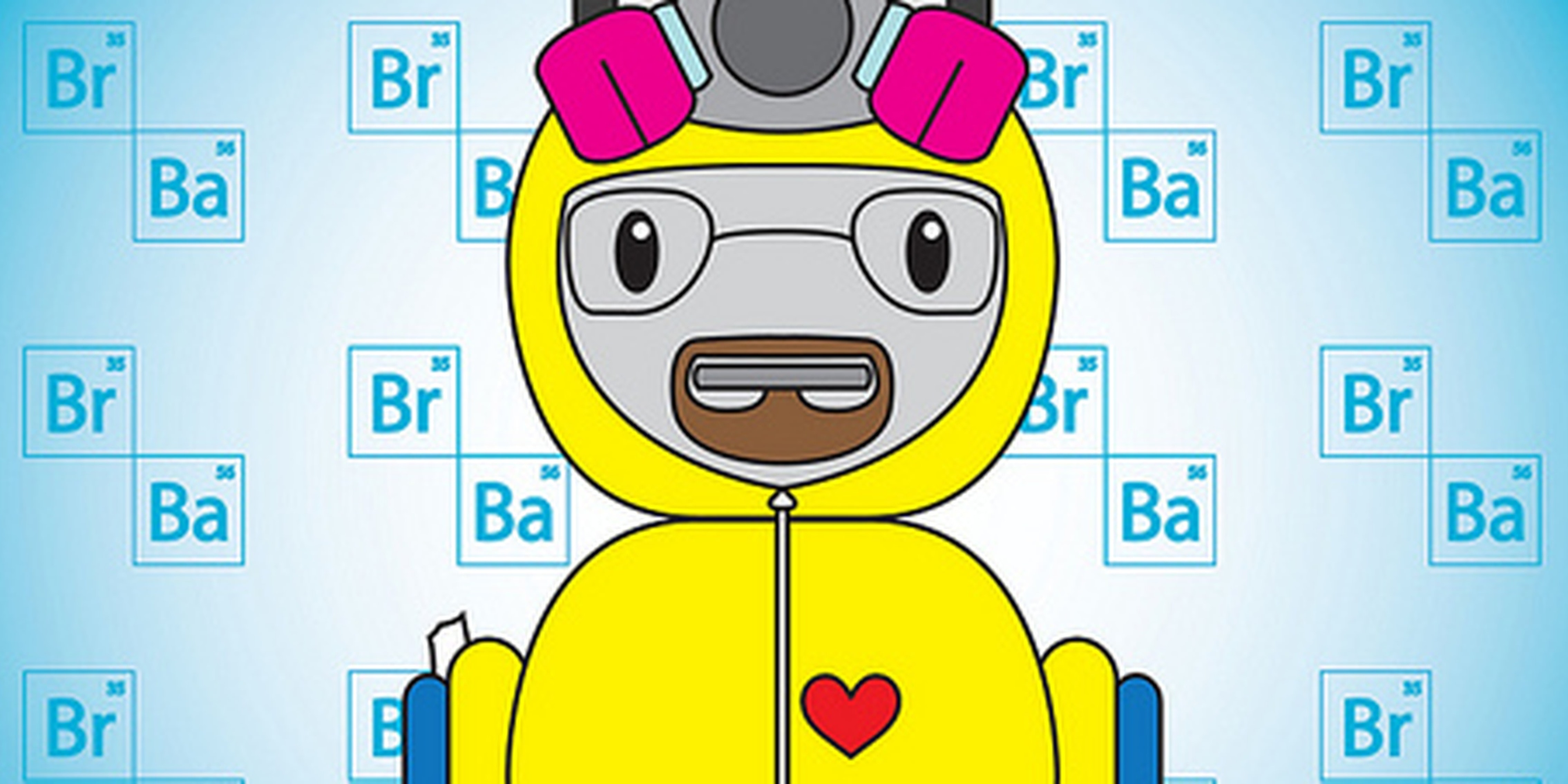 The best of ‘Breaking Bad’ fanfic

If you’re going through withdrawal before the acclaimed show’s series finale this weekend, you could try delving into the world of Breaking Bad fanfiction.

We combed the BB entries on Archive of Our Own (AO3), a fanfic archive created and run by fans, and found 13 gems to tide you over until Sunday. Fair warning: Some involve spoilers and others involve Jesse and Mr. White with chemistry other than what’s used to cook meth. Hot.

“Five Meditations on a Codependent Trainwreck,” by callmejude

Jesse and Walt’s relationship described to a perfect T—unhealthy, codependent, and scary for them both. “Trainwreck” doesn’t begin to cover it.

[Skyler has] briefly reminded of investing in a Britney Spears–style schoolgirl uniform when Walt first announced going into teaching. In the beginning, they’d used it a lot.

She wonders if Walt does anything similar with Jesse. Roleplaying. She wonders if it even counts as roleplaying, since they actually were, at one point, student and teacher.

“Weights and Measures,” by squonkfan

Walt takes care of Jesse and then he “takes care” of Jesse.

Your buzz briefly mutates when you arrive home to find a jimmied front lock and Jesse crashed out on your couch. He comes here? Here. That imbecilic. … You start to wake him up, stop. Your fingers are just short of his shoulder, and the shoulder is bony and bare; he’s shirtless, folded into himself, the skin of his nose and eyelids enflamed. Your hand wanders, skimming his hair before dropping to your side.

Mike finds a way to help Jesse with his doubts.

“Jesse.” Mike reached out and hugged him, running his hands over his shoulder again, then down his arm to arrive at the tattoo on his wrist. “You’re turning red. You’re shaking. What are you afraid of? This isn’t the Jesse I know. The Jesse I know isn’t afraid of anything.”

Jesse leaves Walt a meaningful present when he’s in the hospital: a Blue’s Clues doll. And yep, it is super-meaningful and foreshadow-y, just like everything on this show.

“Whatever, man,” Jesse said finally. “If you don’t like her, fucking give her to Goodwill or something. Probably some kid writing Santa for her right now.”

“Anatomy of a Marriage,” by Selena

This is an amazing Skyler White fic, showing her thoughts on her marriage to Walt. It’s a rare look into a character who is often dismissed.

Walter White had been the first man not intimidated or afraid of her. It never for a moment had occurred to her she could be afraid of him. Skyler is able to cloak herself into helpless femininity if she has to, but it doesn’t sit well on her; when she’s young, it offends her pride, and as she grows older, she’s keenly aware it could look ridiculous. Marie doesn’t care about that, but then, Marie is a natural at it.

“A Moment’s Lull,” by warriorpoet

Skyler and Jesse get revenge on Walt by having sex with each other and talking “dirty” about murdering him. It’s real intense.

Skyler approaches him again. This time, he stays still.

“Because we would know,” she says. “And we would feel better because of it.”

“Jesus Christ,” Jesse sighs, covering his face with his hands. “This is fucking batshit.”

“Saturday in the Sticks With Jesse,” by htbthomas

Walt Jr. isn’t stupid. He has been underestimated his whole life because of his cerebral palsy. But his CP affects his muscle control, not his brain function. There is something going on with his dad, something his mom knows about but pretends not to, something he has wanted to ignore for a long time, but he can’t anymore.

“Congratulations on the Mess You Made of Things,” by callmejude

Jesse gets hypothermia in the desert. Walt keeps him safe.

Jesse doesn’t realize he’s been shaking until he feels a hand on his shoulder.

“The Smell of Chlorine,” by SegaBarrett

Gus sees something he wants.

“The water’s nice and warm,” Jesse bribed. He flipped over on his stomach and swam a few strokes over to where Gus was standing.

“I do not enjoy swimming.”

“Badger and Skinny Pete Are Dead, Bitch,” by bogged

In which Badger and Skinny Pete are now Breaking Bad’s main characters. Oh no.

Badger has almost literally no idea what is going on, at more or less any point, ever. Which isn’t to say he’s stupid, he just isn’t let in on the story. Him and Skinny Pete and Jesse have been best friends almost their entire lives, and he knows it’s normal for friends to grow apart as they get older and their lives gain a more individual importance, but he can’t help but feel like Jesse is phoning it in.

This is a Breaking Bad/Les Miserables crossover. Yeah, I don’t know how it works either.

They buy an RV. Well, Grantaire buys an RV, because despite all of Enjolras’s name-brand clothes and regal bearing, he’s basically broke, apparently. Student loans and all that, Enjolras had said, and shrugged. But the venture would be more than worth it, he promised, and Grantaire would be more than paid back.

“Partners, Proteges, and Pawns,” by wishfulsinful

Walter was a fastidious man, a man who appreciated when things were done correctly. No one was more conscientious about correct procedure in the lab that Gale. That left only one person to lay the blame on.

As the first side of the album came to a close, Gus pressed a kiss to Gale’s temple.

“You’re still troubled by the events of this morning.”

“Five Things That Never Happened to Jesse Pinkman (and One That Still Might),” by vegarin

It ends three, four, five, six days later, with nights and days blurring together like different colors of paint swirling and whirling in a bucket, in bright yellow and red and white and black, all of which burn in the back of his retinas, leaving scorched holes in his head.

At the end of the day six, he wakes up to the sound of Jane getting violently sick all over the bed.  She’s sweaty and hot, curled up tight on her side of the bed, and he doesn’t know what to do. He wants to call 911, but she says, No, baby. No.

Photo via Jenn and Tony Bot/Flickr