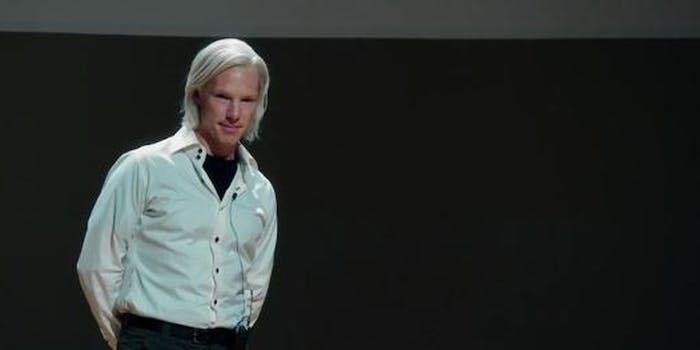 Asked if he was concerned about retaliation from the WikiLeaks founder for his portrayal in The Firfth Estate, the Sherlock star said fandom had his back.

No one understands quite how zealous fans can be like Sherlock star Benedict Cumberbatch. After all, when you’ve been turned into an Internet meme featuring your face alongside an otter, you’re pretty much forced to stare into the gaping maw of Tumblr and discovered your inner strength.

Undoubtedly anticipating the fan frenzy that will accompany his turn as WikiLeaks founder Julian Assange in the upcoming film The Fifth Estate, Cumberbatch told Entertainment Weekly this week that he wasn’t worried about backlash from the controversial hacker activist. Although the respected British actor claims Assange rejected his attempts to seek input on playing the part, he says there’s nothing even someone with the power of Assange can do against the loyal army of fans—known as “the Cumberbitches.”

”I’m sure he’ll go after me,” he told the magazine.

“I’m not a bank with offshore accounts in the Canaries, I don’t fiddle my taxes, I’m not wanted for war crimes. If he goes after me, it’s going to be a waste of his extraordinary talent. But if he does, I kind of respect that because he needs to be able to answer back. … Anyway, the Cumberbitches have got my back, so I’ll be fine.”

Cumberbatch seems to be continuing his interview policy of only referring to Sherlock fans as “Cumberbitches,” despite the fact that this name only applies to a community of fans in England. (Elsewhere, we’ve heard the official-unofficial term is Devout Servants of his Royal Otterface.) Cumberbatch has historically not been kind to the Cumberbitches, worrying about the name they gave themselves and generally being alarmed by their intensity. But he also routinely acknowledges the enormous influence and enthusiasm of the fanbase that has emerged around his career-defining role as Sherlock.

Recognizing the power of the people?

Sounds like he’s on the right track to play Assange.