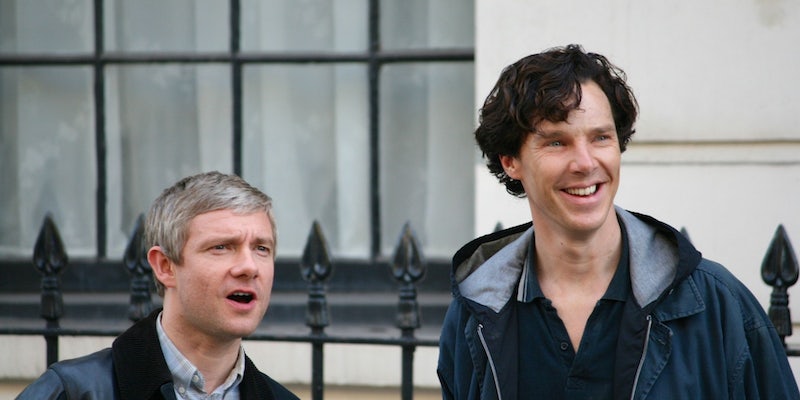 The creator of the hit BBC series Sherlock, Steven Moffat, has said he doesn’t see why the relationship between Sherlock Holmes and John Watson (known to fans as “Johnlock”) should be “weirdly sexualized.” But he can’t seem to stop filling the show with evidence to the contrary.

Now we learn that during the recently aired third series, fans almost got a scene showing John and Sherlock in a gay nightclub—the stuff fandom dreams (and countless slash fics) are made of.

At a ‘Meet the Filmmakers’ talk with the cast and Moffat Tuesday at the London Apple store, Watson’s actor Martin Freeman dropped the bombshell that “We got mullered in a gay club,” apparently surrounded by a number of topless gay men. Co-star Benedict Cumberbatch added that “I had no idea why we were there and what it was and why they didn’t have their clothes on and then it dawned on me.”

Moffat’s own reluctance to portray queer characters on his shows hasn’t stopped him from loading Sherlock with homoerotic subtext and overt references to the fact that everyone thinks John and Sherlock are gay. In fact, when you google “queerbaiting,” a dreaded fandom word to describe intentional homoerotic subtext that never intends to result in a gay relationship—”Sherlock” is the second suggested term, following another notorious ‘we’re-not-gay’ show, Supernatural.

The creative teams of both shows have uneasy relationships with the large slash fandoms they have spawned, but both shows are stuffed with an abundance of subtext, with heterosexual male bonds replacing numerous romantic tropes. On the one hand, the evidence that the writers are responding to popular fandom pairings is a form of validation; on the other hand, the constant denial of queer identity while exploiting gay subtext as a way to draw in viewers is a deeply offensive tactic to many fans.

Both fandoms have had recent moments of deep tension resulting from the actors’ discomfort with their popular slash pairings. Most notably, Sherlockians reacted with outrage to British writer Caitlin Moran’s behavior at a screening of the first episode of Series 3 in December, when she attempting to get Freeman and Cumberbatch to read a slash fic despite their obvious discomfort.

But at least part of the tension seems to be imposed upon the fandom through the creators’ delight with teasing out the nature of Sherlock and John’s relationship. Sherlock is a show that’s extremely short—in four years the show has produced just nine episodes. It’s also likely to be an extremely long time before fans get a glimpse of Series 4: Moffat recently hinted that it could take another 2 years before it airs. That’s more than enough time for fans to analyze and agonize over every slashy moment in the last 3 series.

Perhaps Moffat wants to make sure Johnlock fans have plenty of extra material to preoccupy them through the next long hiatus.

Or perhaps he just doesn’t realize that every delicious tidbit he includes about John and Sherlock’s “bromance” is a bitter reminder to fans of the nuanced queer relationship they could have had instead.