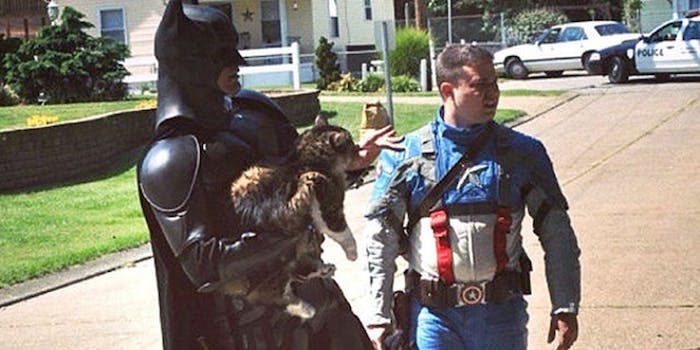 Batman and Captain America rescue a cat from a burning house

A superhero party appearance turns into a real-life rescue, and the video goes viral.

The small town of Milton, W.V., got the heroes it needed on Sept. 7 when two men dressed as Batman and Captain America interrupted a house fire and saved a kitty.

John Buckland is a former firefighter who was entertaining a group of children for a birthday party at the local American Legion on Saturday. He and friend Troy Marcum were performing as Batman and Captain America when some American Legion veterans noticed flames from a nearby building. The two superheroes rushed in to save the day, still dressed in their costumes.

As onlookers gaped, WSAZ reported that Buckland ordered Marcum to use his super-strength:

“I said, ‘Captain, I need you to find the biggest rock you can find, and throw it through that window right there to let some of this smoke out of that front room,’” Buckland said.

Troy “Captain America” Marcum grabbed a large rock and asked Buckland if it was big enough.

“I said, ‘That’ll work.’ Captain throws this huge rock, out comes the smoke through the window and I decided to go back in that door again,” Buckland said.

Buckland went inside and fought a terrified cat in order to bring it out safely.

When asked, Buckland identified himself as being one of the duo of “Batman and Robin—or whatever his name is”—a surprising mixup, since Buckland runs a local “Heroes 4 Hire” business. (Or maybe just a little rivalry between DC and Marvel?) Still, he stayed in-character: when he had to take off his mask to receive oxygen, he made the group of amazed children swear not to reveal Batman’s true identity.

The caped crusader’s flustered interview has gotten over 60,000 views since CBS shared it on YouTube earlier this week.