A beginner’s guide to ‘Attack on Titan,’ the most intense anime of 2013

Shingeki no Kyojin, known in English as Attack on Titan, is a manga by Japanese artist Hajime Isayama.

In that odd trick the universe sometimes has of creating a quality series and then giving that series an enormous audience, the year’s most bizarre and beautiful anime is also one of its most popular.

Shingeki no Kyojin, known in English as Attack on Titan, is a manga by Japanese artist Hajime Isayama. It was an instant hit when it debuted in 2011, and has since sold over 20 million volumes. Since the anime adaptation premiered in April, a massive English-language fandom has discovered the show, which is currently airing its first season on Crunchyroll.

The series has garnered widespread critical acclaim, and has spawned several games, a live-action movie in production, and a recently-announced sequel. But it’s the anime that really brings Isayama’s world to life: a historical society loosely based on 19th-century European culture, threatened by bizarrely grotesque, larger-than-life monsters—who may be more like humanity than anyone realizes. 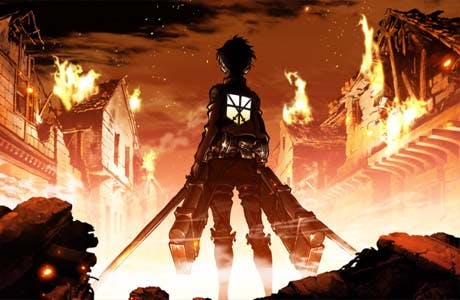 Photo via STFU and Play

While it’s difficult to sum up SnK without giving away plot spoilers, one word seems to return again and again in the reactions of people who watch it for the first time: intense.

Everything is big in SnK: the monsters, the action sequences, the drama, the battles, the music. Its popular opening credits give you both the intensity of the series and the basic concept: humans using sophisticated pulley systems to fight giant zombie babies, set to gorgeous animation and a killer soundtrack.

With episode titles like “A Dim Light in the Darkness of Despair,” the anime doesn’t pull its punches. Attack on Titan is bloody, even gory, and personal trauma gets handed out like candy. The dark themes combined with the struggle for existence are a winning combination. And animation like this is hard to resist.

But Attack on Titan has even more going for it than a gorgeous aesthetic: namely, the world’s creepiest giant zombies. 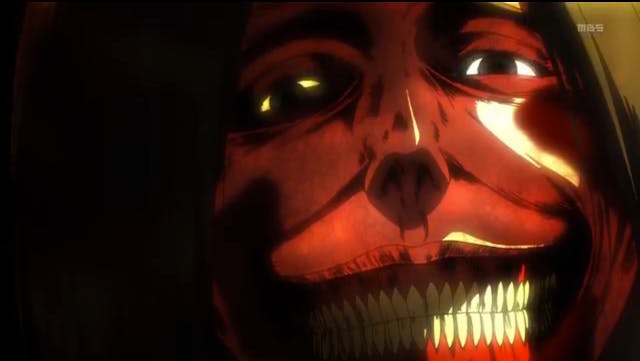 What’s creepier, this Titan’s zombie-fied smile, or the fact that its skin is missing?

What makes the Titans so terrifying is that they’re so atypical for monsters. Isayama originally decided to use the Titans as monsters because “giants are kind of gross.” But Isayama’s giants aren’t the kind you normally see. For one thing, they’re totally naked and possess a variety of physical characteristics ranging from no skin to razor-sharp teeth. 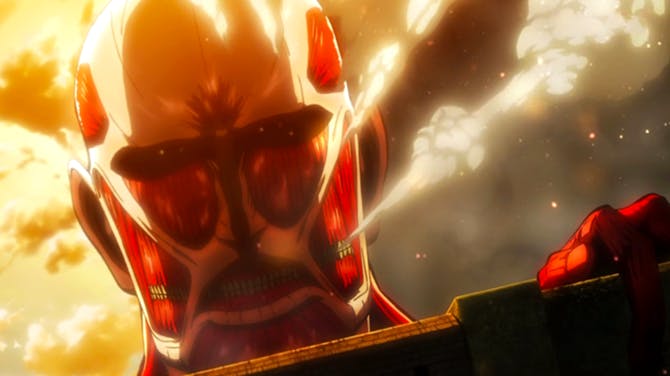 They also exhibit bizarre behavior that no one can quite understand. Why do they eat people even though they don’t need to eat to live? And how can they disappear and reappear so easily? The answers to these questions may bring the Titans and the humans closer together than anyone expected—which is a bizarre experience given how eerily alike and unlike humans the Titans already are.

Dough-like bodies floundering, they stagger erratically about like drunk babies.

Taken out of context, the Titans are often hilarious—

—and sometimes even in context.

“How am i suppose [sic] to take this manga seriously?” asked planetearth-doyouread on Tumblr after taking a gander at the Titans, with their giant heads, bulbous eyes, and weird anatomical proportions. 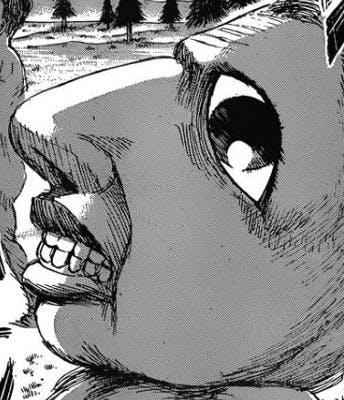 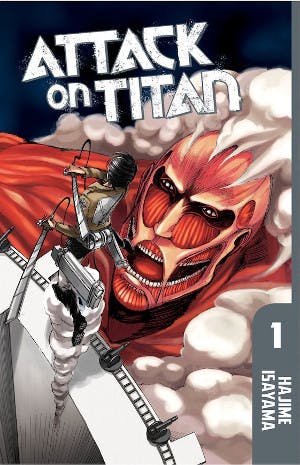 Attack on Titan, issue no. 1

To understand where Attack on Titan’s monsters originate, we need to look to 19th-century Spain, where the artist Francisco Goya painted symbolic representations of the atrocities of war in the form of gory and eerie images of mythological giants. Goya’s series of Titan paintings inspired both the art and the animation behind Attack on Titan, as well as its English name. The literal translation of Shingeki no Kyojin is “Advancing Giants.” The use of “titan” instead makes the homage to Goya explicit—as does the art itself:

Shingeki no Kyojin vs. Goya’s Saturn Devouring His Son 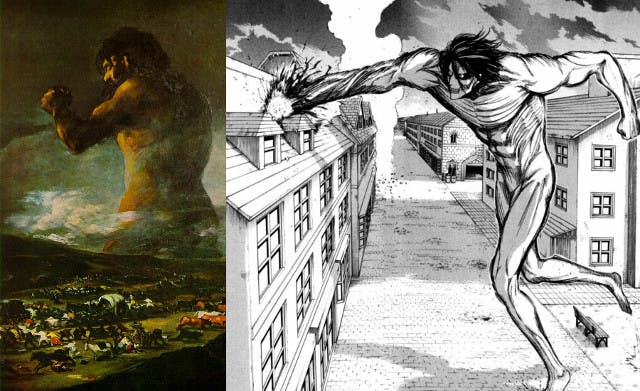 Shingeki no Kyojin vs. Goya’s The Colossus

Like their namesakes, the giants in Attack on Titan are allegorical, serving as the gruesome pallette for an exploration of war and human injustice.

The Titans are just one of the many ways that Attack on Titan bears a striking resemblance to Guillermo del Toro’s recent summer blockbuster Pacific Rim. In both narratives, Asian societies figure prominently in the fight against giant monsters. Both feature a small child, orphaned as a result of the attacks, who then vows to seek revenge by becoming a soldier. In Pacific Rim, these soldiers are called “Jaeger pilots,” “jaeger” being the German word for “hunter.” In Attack on Titan, Jaegers are mentioned in the theme song repeatedly, and the main character is Eren Yeager, often translated as Jaeger.

Also, in both narratives, humanity tries to build massive super-walls to keep out the monsters, only to have even bigger monsters than expected come along and easily break through their defenses. Isayama has said that he based the concept of his giant walls on Japanese society, and its historical attempts to isolate itself, not always with success, from the outside world.

Pacific Rim, oddly enough, doesn’t seem to have been intentionally based on Attack on Titan so much as created in homage to anime tropes in general. But the similarities have led to lots of crossovers and jokes, like “I heard you like Jaegers so I put a Jaeger in your Jaeger so your Jaeger could kill Titans.”

Attack on Titan is similar to English series like Lost and Heroes in that the fast-paced intensity and frequent plot twists are part of the series’ appeal to fans. But unlike those shows, its plot is extremely simple: for 100 years, the last small colony of human civilization has lived in an isolated corner of the world, defended from the Titans by three enormous walls.

To further protect the people, the elite team known as the Survey Corps (sometimes translated as Scouting Legion) has spent decades perfecting and learning to use an elaborate system of pulleys, dubbed “Maneuver Gear,” that allow them to essentially fling themselves through their villages from rooftop to rooftop. (Like spiderman but with ropes instead of webs.)

With the extra height, they can launch attacks against the Titans; but not even the Survey Corps are prepared for the Titans’ inevitable return. 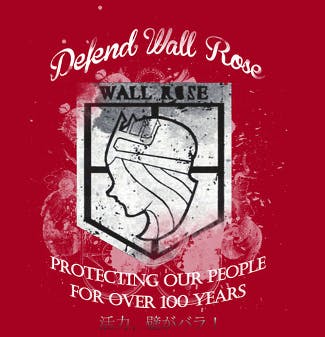 Attack on Titan sports a large ensemble of characters, human and Titan alike, that each get a hefty amount of development. But there are four primary characters who receive the most character development–and the most attention from fandom:

Eren Yeager (often written as “Jaeger”). For all SnK is an ensemble cast, its main character is unequivocally Eren.

Just a kid when the Titans return, Eren devotes his life to fighting them. Though he’s not the most skilled or experienced member of the Survey Corps, he has the most personal reason of all to want revenge against the Titans—and the biggest surprise for the humans fighting with him.

Mikasa Ackerman. The adoptive older sister of Eren, Mikasa vows to protect him, and joins the Survey Corps so she can have his back. Luckily for him, in addition to being wise, kind, and determined, she also happens to be one of the best fighters around.

Armin Arlert. Eren’s childhood best friend, Armin completes the trio of children who join the military Survey Corps together. Because Armin tends too endure a fair amount of trauma, he can frequently be found weeping. But beneath the sensitive exterior, he’s surprisingly resilient.

Natural joy turning to trauma: that’s Armin in a nutshell.

Levi (often spelled “Rivaille”). Levi is a lance corporal, generally regarded as humanity’s greatest soldier. He looks like this at all times:

As the series’ other resident hot guy, Levi frequently gets shipped in fandom with Eren. He’s also so popular that the recently announced prequel manga, Shingeki no Kyojin Gaiden: Kuinaki Sentaku Prologue focuses on Levi’s backstory. 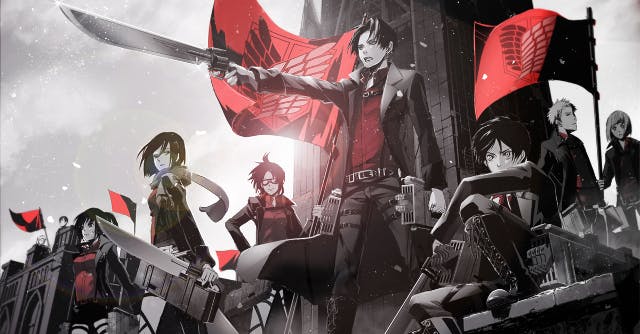 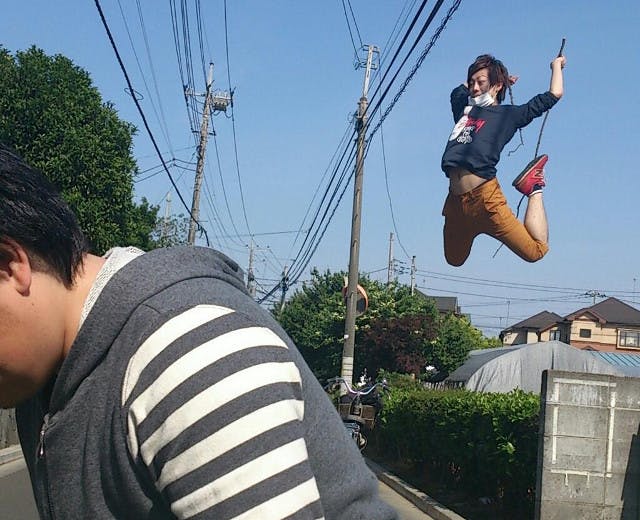 Photo via  Know Your Meme

Like every other fandom, Attack on Titan is awash with fanvids, parodies, memes, fanart, and cosplay. What’s perhaps surprising is how quickly the SnK fandom has coalesced and amassed. Like Free!, a.k.a. the “Swimming Anime,” SnK seems to dominate large swathes of Tumblr as well as traditional anime forums and communities.

The SnK theme song is “Guren no Yumiya” (“Crimson Bow and Arrow”) by a J-pop band called Linked Horizon. The song also serves as the theme song for the main character, Eren.

How much do SnK fans love the opening credits? So much that they’ve turned a misheard rendering of its first line, “sie sind das Essen und wir sind die Jäger” (They are the prey and we are the hunters), into a Tumblr catchphrase. The correct lyrics are, “Seid ihr das Essen? Nein, wir sind die Jäger,” which translates to “Are you the prey? No, we’re the hunters,” which makes a bit more sense in the context of the series.

They’ve also applied “Guren no Yumiya” to anything and everything to create instant drama. It’s the equivalent of the 2010 “BRMMMMMM!” trailer for Inception, only this time instead of a thrumming bass, it comes with Verdi-esque choral music. The resulting memes are often hilarious.

What is it, Eren?

Another of the fandom’s recurring memes is this guy, Jean Kirstein, who apparently gets really happy if you mention his name in the manga. The hilarious incongruity of his facial expressions in these three panels and the banality of the question turned this into an insta-meme that pops up in the craziest places.

The fandom has a beautiful range of artwork, from traditional fanart… 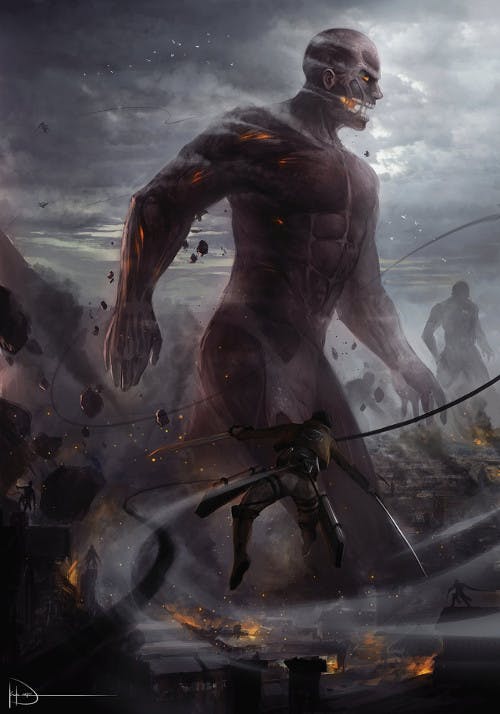 Fanart of the Battle of Trost 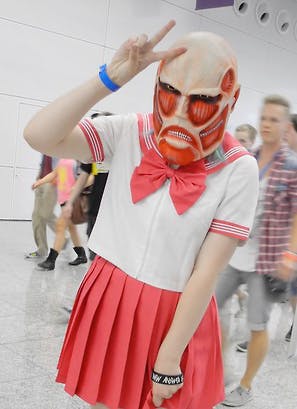 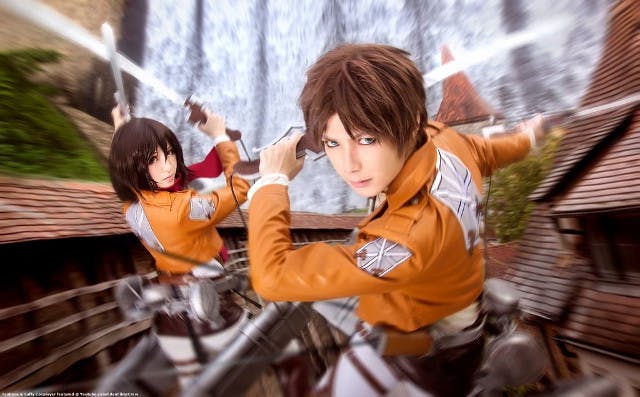 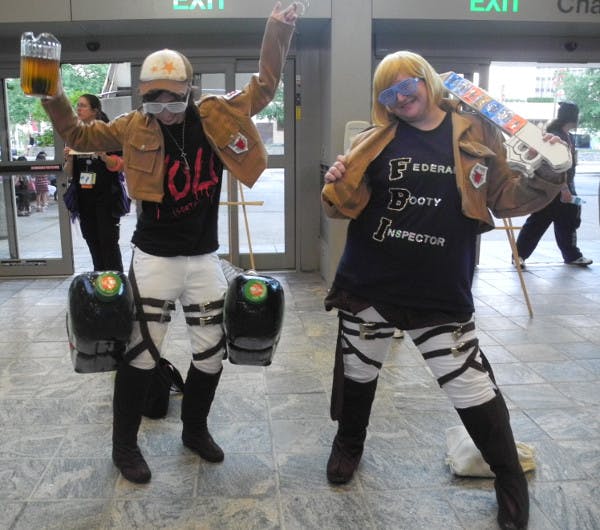 …to the recent exhibition of sand artist Toshihiko Hosaka:

Along with fandom’s evolution from anime forums to Tumblr, SnK fandom has moved from older archives like fanfiction.net to the Archive of Our Own. Currently AO3 hosts more than 1600 Attack on Titan fics for every possible pairing; by contrast, Fanfiction.net hosts only 72.

Although the series is only in its first season, a live-action movie is due out next year in Japan. Look for the buzz—as well as the intensity level of the year’s most unexpected fandom—to stay high.