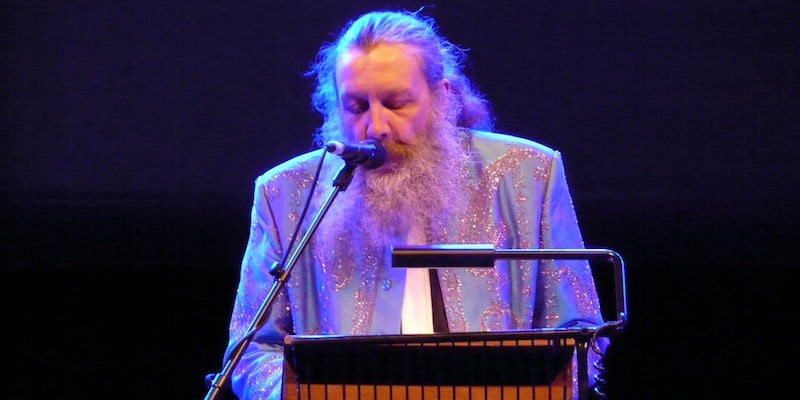 One iconic comic creator calls another one "herpes."

The interview with blogger Pádraig Ó Méalóid is more like a 15,000-word essay/rant against Moore’s critics, interspersed with a handful of questions from the interviewer. Moore touches on various topics such as potentially racist themes in his League of Extraordinary Gentlemen series and a dispute with British journalist Laura Sneddon over an alleged breach of confidentiality regarding his new book—but the thing that grabbed most readers’ attention was his explosive takedown of Grant Morrison.

Along with Moore himself, Morrison is one of the biggest names currently working in comics. Considering Moore’s reputation both as an icon of the genre and as a famed Grumpy Old Man, he’s probably the only person who could get away with this kind of public statement.

Over the course of the interview he disparages Morrison’s image as the cool, aging rocker of the industry, writing, “for thirty years I have had to patiently endure the craven and bitchy hostility of someone who, when I bother to think of him at all, I think of as a Scottish tribute band.” He then goes on to describe Morrison as “herpes-like,” “a feverishly fixated non-entity,” and like “my own personal 18th century medicinal leech,” characterizing him as a frustrating hanger-on who used Moore’s work as an inspiration but never evolved beyond shallow imitation.

“This was evidently some pallid species of career-tapeworm that one might perhaps expect to pick up in the parasite-infested waters of the comic business,” wrote Moore, describing his reaction when he came across Morrison towards the beginning of Morrison’s career in the industry. “A fame-hungry individual without the talent necessary to satisfy his inflated ambitions who had decided to connect himself with my name by simultaneously borrowing heavily from my work and making studiedly controversial statements about me in comic-book fanzines grateful for any free content from supposed professionals. I decided that the best thing I could do about this needy limpet was to ignore him and everything connected with him.”

There’s only a seven-year age difference between Morrison (53) and Moore (60), but Moore’s comments in this interview highlight the ongoing image of Moore as a curmudgeonly grandpa while Morrison still manages to get away with doing things like filming a music video with My Chemical Romance at the ripe old age of 50—although Moore’s opinion on this attitude is clear:

“… by his own admission Grant Morrison had spent most of the Punk era in his room for fear of being spoken to roughly by some uncouth person with a pink Mohawk and a U.K. Subs T-shirt. I’m afraid I didn’t see how appealing to completely unearned teen rebel credentials made any difference to the spoiled-child behaviour of a deeply unpleasant middle-aged man.”

The full viciousness of the interview is difficult to illustrate here, what with it being over 15,000 words in length. Suffice it to say that Alan Moore really does not like Grant Morrison, despite the fact that by his own admission, they have only met once in real life, decades ago.

The response from comics fans is an interesting combination of grudgingly affectionate respect for Alan Moore, and a lack of respect for the interview itself. Much like acclaimed sci-fi author Harlan Ellison, Moore has a public persona that invites a certain amount of controversy, since he apparently has zero desire to self-censor or make himself seem more appealing to the general public. As a result, much of the audience response to the interview boils down to comments like this:

I feel like Alan Moore and Bob Dylan are similar in the way that everyone wants to ask their opinions and no one want to hear them.

The most common reaction to the “final statement” of a public figure is usually outright derision. Shia LaBeouf/Justin Bieber/Cher just tweeted that they’re “retiring?” Please. But in the case of Alan Moore, this may well be the end.

He’s already known for his reclusive nature, his dislike of the mainstream comics industry, and his overall lack of patience for what he perceives as idiocy or pandering behaviour. However, this interview indicates that against all previous expectations, up until now he may well have been holding back. The interview’s length and vituperative rage against his critics (and Morrison) is so intense that just perhaps, this is the real “last interview.”

Grant Morrison has yet to make any kind of public reply to Moore’s statements, but whatever happens, it would be out of character for Moore to apologize or recant.