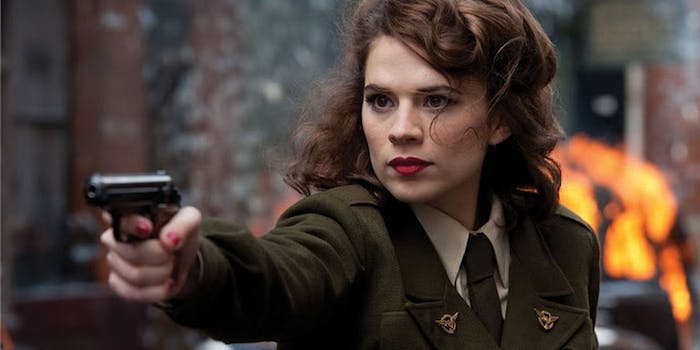 Marvel’s Agent Peggy Carter to headline her own TV series

Peggy Carter, the British Intelligence agent from the Captain America movies, is getting her very own TV series.

Marvel tested the waters a few months ago by releasing a short film about Agent Carter on the DVD for Iron Man 3, a one-shot story that took place a year after Captain America: The First Avenger. The fan response was enthusiastic enough that rumors of a TV series have been circling ever since, inspired by the success of Marvel’s Agents of SHIELD.

It seems that DVD one-shots are Marvel’s new way of gauging audience support, as Agents of SHIELD was partly spurred on by Marvel fandom’s surprising interest in various straight-to-DVD shorts that had no superhero content at all.

According to the Mirror, the Agent Carter TV series is aiming for an airdate near the end of 2014, with British actress Hayley Atwell looking forward to reprising her role. After the announcement of four new Marvel superhero Netflix shows back in November, this will bring Marvel’s total of female-led TV or movie franchises up to two. (That’s two more than DC Comics, for those who are keeping track.)

After the release of the Peggy Carter short film last year, Hayley Atwell was very clear about her opinion of female characters in superhero movies, asking,

The new series is likely to take place soon after the end of the first Captain America movie, meaning that this is not only a female-led Marvel series about a character without any superpowers, but it’s a historical drama as well. If the Agent Carter one-shot is anything to go by, it’ll be an action-packed spy thriller with a side order of snazzy 1940s outfits and smashing the patriarchy. We’re psyched already.