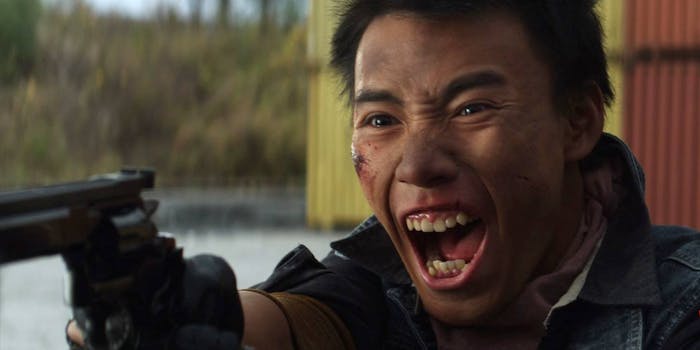 Hollywood, you're going to need to step up your game to compete with this.

The idea of a live-action remake of Akira has been floated a few times, most recently as a Hollywood movie starring several notably non-Japanese actors including Helena Bonham Carter, Garrett Hedlund, and Gary Oldman.

If this vision for a live-action Akira fills you with dread, then you’re not alone. Back in 2012, a group of Akira fans used Indiegogo to crowdfund a trailer that actually respects the original manga and animated movie, and the finished product has just been posted on YouTube.

Starring Supernatural’s Osric Chau, the Akira Project’s trailer pays respect to the visual style of the Akira anime without seeming like a shot-for-shot remake. Basically, it looks a thousand times better than the ominously racist idea of an Akira movie where a whole bunch of white actors pretend to be Japanese people with Japanese names, living in Japan.

Unfortunately for Akira fans, this probably isn’t what the real movie will look like. The live-action reboot is still stuck in the pre-production stages, but its director recently shared some opinions that won’t be popular with anyone who liked the original anime. In an interview with ComingSoon, director Jaume Collet-Serra said that none of the characters in Akira were “interesting,” adding, “That’s part of the Japanese culture, they never have strong characters.”

This attitude indicates that along with populating Neo-Tokyo with white people, he would probably want to rewrite Akira for American audiences. Kind of a weird move, considering the fact that the original movie was hugely successful worldwide, and still enjoys cult status in the U.S.

The Akira Project’s trailer only cost $3,428, and aside from a few seconds of unavoidably clunky CGI, it looks like a movie that Akira fans might actually watch and enjoy. Hollywood needs to step up its game.