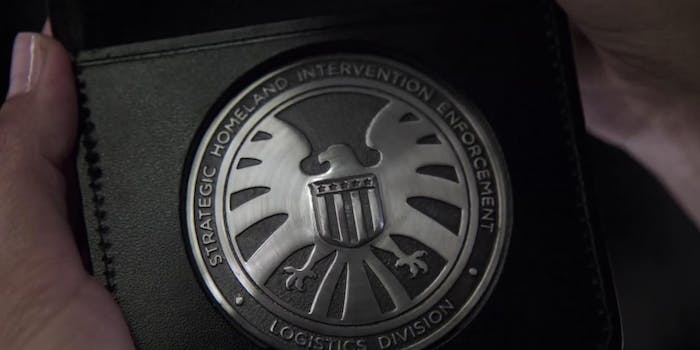 This extended fan edit of 'The Winter Solder' and 'Agents of S.H.I.E.L.D.' will tell you all you need to know about Hydra.

Regardless of its quality, a fan edit is an inherently pure piece of art. Its use of copyrighted materials disqualifies it for any profit gains, and the creator is usually forced to keep his or her real name a mystery, which is a shame since some of these fan edits take a lot of time. Especially something like Captain America & The Agents of Shield – THE HYDRA WAR, which comes in at a whopping four-and-half-hour running time.

While bad fan edits quietly exit the net’s attention, a good fan edit can cause an uproar. At their best, fan edits spot potential that was derived by viewing a work through a different lens. They present material that you’ve been tirelessly defending to your friends (sometimes for years) in a such a way that makes them think “wow, this stuff actually is pretty cool.”

I’ve never seen an episode of Agents of S.H.I.E.LD. (AoS). The mediocre reviews of its first season kept me away, and now that the reviews have picked up, I’m weary of having to watch an entire bad season to catch up.  So I was excited to see the first season edited into the very context that hamstrung it in the first place: the fact that it was largely considered a companion piece for The Winter Soldier.

After watching CaptCoulson’s fan edit, (CaptCoulson is his Reddit handle, so you know he’s a legit fan) I can confidently say that he’s presented Agents of S.H.I.E.L.D.  in a way that’s not at all terrible, and it’s a great way to get caught up while skipping all the bad stuff. It’s worth anybody’s time who’s a major fan of Winter Soldier, a casual viewer of AoS, or that rare person that thought AoS‘s first season was fantastic just as it was. For obvious reasons, we can’t tell you exactly where to find the fan edit, but it shouldn’t be too hard to find with a little searching.

I emailed CaptCoulson to ask him some questions about his process, and the cut in general, and he had a lot of interesting things to say (if he’s indeed a “he,” the mystery is great in the world of fan editing):

What was the process for reconciling the timelines of the two sources? Did you make notes about certain events, cut up every scene and then put them back again in chronological order, or just move pieces around until everything seemed to work out correctly? However you did it, it seems like it’d require quite a ton of time.

Well, first of all I have to say I originally got the idea at least in part from this guy on YouTube who’s made two videos named “Marvel Omnibus”, one for Phase 1 and one for Phase 2, where he gives you narration telling you where to make the specific cuts in all the Marvel movies to make one huge one in proper chronological order. However, unfortunately, as has been pointed out even in the comments section, he somehow got quite a bit of the Phase 2 time line wrong (plus there’s a lot of AoS he just left out altogether, and it’d be changing with all the Agent Carter footage, etc). Anyway, I at first went thru the Captain America movie and wrote down everything about it, I broke it down into 50 separate scenes, and just using the logic that seemed presented to me within it, figured out how many days over which it takes place, and what happened which day. Then taking the AoS material, I just made my best common sense judgement based on what was happening in it, in relation to the movie, and I may not be 100% officially correct, but I honestly feel I got it close enough to make it at least worth viewing/doing.

Having not seen Agents myself: From which point in the season did you pull the most footage from? Did you have to cut out a lot of subplots in AoS episodes that weren’t relevant to the Hydra story?

It seemed obvious to me it was always going to be the final 7 episodes of the season. Granted, there was lots about the “Clairvoyant” character prior to that, but the 01×16 episode “Beginning Of The End” was the last episode airing before the release of the movie, and gave you enough of the Clairvoyant story where it was JUST before everything was about to shift into the Hydra coming out narrative. And absolutely, there is A LOT I cut from the TV, especially the episodes that take place after like 95% of the movie. From the beginning, it was a total given to me that the entirety of The Winter Soldier movie would be used, that that was really the center of the story, the series being the complement. There was a lot of just more character-based things I was looking to cut (especially anything relationship-y between Skye/Ward, and Fitz/Simmons), honestly because I thought the interest level of the average viewer might decrease a bit once the movie stuff was finished. So I was just looking to end the truly essential parts of the Hydra battle narrative as soon as possible. I wanted it to be very quickly paced.

Were there any heartbreaking cuts you had to make to eithers’ source material? Anything you loved, but didn’t really work in this cut?

Actually I’m happy to say, no not really. Like I said, every single minute of TWS was always going to be in there (including both post-credits sequences, one I put back much earlier into the story itself, where I felt like it properly belonged). There were some action sequences that I either shortened or cut entirely out of the episodes, and that I felt dragged a bit, that some people may indeed wish was in there, but again, I just wanted to finish the story and get the main plot points done.

How many hours of AoS and Winter Soldier have you watched over the course of completing this process?

Well I’ve been a huge Marvel fan from the beginning, so I saw the Cap sequel its opening weekend, and I’ve watched every single AoS episode either the night it was broadcast or at most the next day, so really everything. And I’d say it was maybe about 6 weeks ago that I just got a desire out of the blue to watch the final 3-4 episodes of season 1, and that was another part of where the idea came from to do this. I realized the story could be told even tighter, than just watching episode 1×16, seeing the movie that weekend, then watching 1×17 the following week, and so on.  That some of the events in 1×17 clearly take place before the end of the Cap movie.

How many times did you think you were finished, when you’d come across a scene in the wrong place that had to be moved, and you’d have to export a new final version?

Yes I would say there were 3 different “drafts” I went thru. For the first one, I knew there was a whole other Jemma sequence I needed to add (when she’s at the Hub and first admits to Triplett she’s trying to study Skye’s reaction to the alien blood) because that was a cutaway during action that was going on on “the Bus” (the plane) with Coulson and the gang, and ultimately I felt like if I’d cut that out entirely, the switch back between the two Bus scenes would’ve just been too awkward. There was also the scene where Ward was jettisoning that pod from the plane that had Fitz and Simmons in it, and initially I thought I could get away with cutting out the little flashback they stuck in to his backstory (of Garrett making him shoot the dog way back in his early years of “training”), and that edit actually didn’t look too bad, but if I’d left it out, they call back to that moment very shortly after by showing like 3 seconds of the dog running away, and if I’d left out the first part, the dog shot would’ve felt like it came completely out of nowhere. So really I needed the first part for context. After that, the additional full cuts of the project were just out of very small mistakes in the edit that I, admittedly as a bit of an OCD person when it comes to editing, just could not sit still with letting go.

How many hours, total, would you guess you dedicated to this project?

This was probably the toughest question to answer of all of them. Especially because I can really just get lost for awhile when doing the smaller machinations of the editing (in a good way) because even though it may initially seem tedious, I know it’s all going to lead to a good outcome. I guess I’d say maybe 12-15 hours, all told. It’s honestly a hard thing to quantify looking back after the fact.

Sure, I’ll give you my main youtube and Vimeo channels. There’s some Doctor Who, West Wing and Die Hard related edits between the two of them I’m pretty proud of and happy with.

And btw, for the record, yes I am looking into possibly breaking up this project into multiple parts to put it onto a streaming channel, the most likely one being Daily Motion. Multiple factors make that I think the most realistic option, though even that might be a little pie in the sky. My initial desire was to have the thing streaming as I thought that would give it a bigger audience, and a couple people (including where I put it on Reddit) have specifically asked for that as they either couldn’t or wouldn’t download it via torrent. But honestly part of me is still afraid that it’ll get taken down too quickly from there, and the attention from THAT might then make it easier to nail off of Kickasstorrents.com. But ultimately, of course I knew that was very much a possibility anyway.