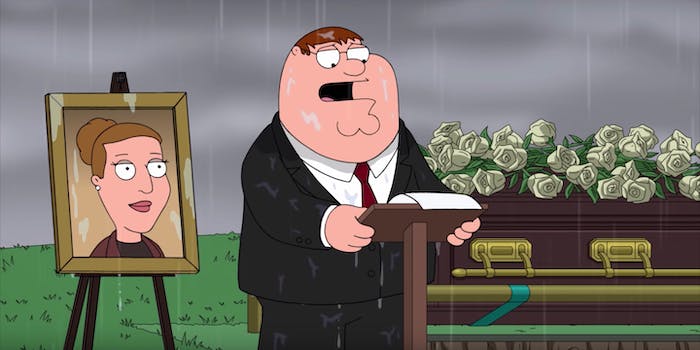 Family Guy paid tribute to Carrie Fisher by sending off her character with a pop culture-heavy—albeit heartfelt—eulogy.

Fisher, who voiced Peter Griffin’s supervisor Angela on the show for 25 episodes, had recorded several episodes of the show prior to her death in 2016, which aired last year. But after those episodes aired, Family Guy decided not to recast the role and instead killed off the character.

The latest episode of the long-running series saw two new bosses arrive at the Pawtucket Brewery while Peter offered his own eulogy for his former boss at her funeral. It’s as silly and irreverent as you’d expect to come from Family Guy as Peter jumbles word definitions, pop culture references, and tidbits about his boss, but there’s still a level of respect and affection for the actress who voices her underneath it all. Even nearly two years after Fisher’s death, the tribute still hits close to home.

Now if only Peter can pull that off again at the right funeral this time.