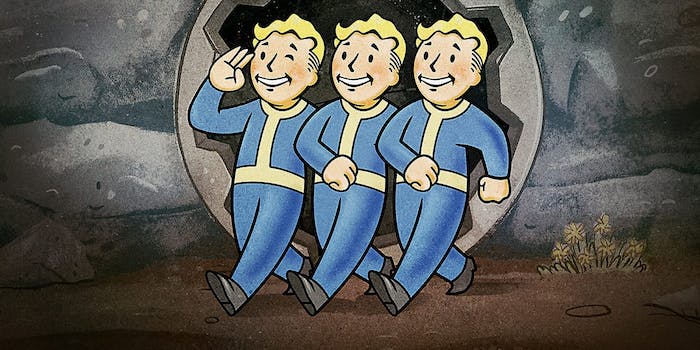 Fallout 76 goes viral over bug that deletes the entire game

It’s not a Bethesda game without a few bugs here and there. Case in point, Fallout 76‘s PC beta has a game-breaking bug that deletes players’ entire game data before they can even start playing. That’s right, nearly 50 GBs worth of preloaded data is being wiped from fans’ hard drives and redownloaded.

Initially, Bethesda planned to launch Fallout 76’s PC beta at 6pm CT on Tuesday via the company’s official BethesdaNet launcher. The company even let players download the game ahead of time so users could hop online as soon as the beta started. But then fans revealed that the launcher was deleting all preloaded data and forcing users to begin the installation over again.

That’s when Bethesda came up with an initial solution: don’t touch anything.

“PC #Fallout76 B.E.T.A. players: We are aware of an issue with the client and are investigating,” Bethesda warned fans. “Do not click any buttons on the client for the time being.”

The company later advised users to let their Fallout 76 beta download finish in full before interacting with the client or attempting to update the download. In the meantime, the company is extending the beta until Thursday, Nov. 1 at 10pm CT.

PC #Fallout76 B.E.T.A. players: We are investigating an issue affecting B.E.T.A. preloads in the https://t.co/spj7OhagQy Launcher: If you are actively downloading the Fallout 76 B.E.T.A., or have a visible progress bar, please allow the download to complete.

The investigation to the issue with PC B.E.T.A. downloads is still ongoing. We appreciate your patience while we continue to look into it. https://t.co/RFpbtuVs5Q

While Bethesda is known for its breathtaking open-world RPGs Skyrim and Fallout 4, the company also has an infamous track record with crashes, game-breaking errors, and wonky display issues. The game developer even warned players that the Fallout 76 beta would have “unforeseen bugs” and “spectacular issues” unimaginable beforehand.

But accidentally deleting your customer’s entire game is astronomically different from anything players have experienced in a Bethesda game before, and it didn’t take long for the gaming community to notice.

>do not click any buttons
Is this the most Bethesda beta of all time?https://t.co/JUb687v7z5

Bethesda: Here's the B.E.T.A to Fallout 76. As I see you already preloaded it! Go on press play!
me: *presses button*
Bethesda: *deletes game*
me: pic.twitter.com/6P5aj10u8V

Others pointed out how ridiculous Bethesda’s initial “don’t click any buttons” message sounds. After all, the Fallout 76 beta was a pre-order incentive.

EVERYBODY STAY FUCKING STILL
THIS IS NOT A DRILL https://t.co/1qKgt66YbN

do not touch the game at all. Keep your uncultered gamer swine hands off my dang software, you might break something https://t.co/6YvattTQDU

In the meantime, Fallout 76 launches on PC, PlayStation 4, and Xbox One on Nov. 14. Hopefully, there are no more game-breaking bugs by then—but this is a Bethesda title we’re talking about, so don’t get your hopes up.