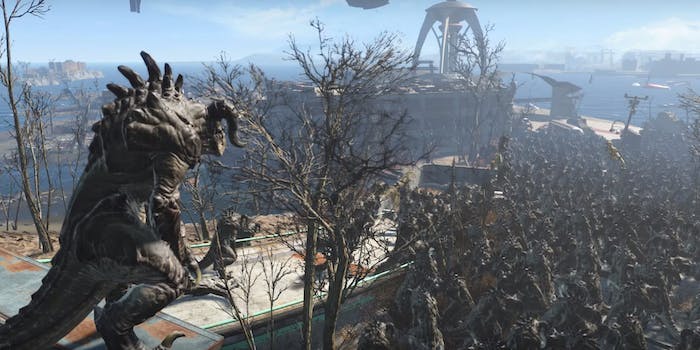 And you thought things couldn't get any worse, after the apocalypse.

Modder Cosmic Contrarian has created a Fallout 4 battle that lies at the intersection of Starship Troopers, Aliens, and Pacific Rim. In other words, it’s freaking awesome.

The 300 Knights of the Brotherhood of Steel, a military order sworn to defend humanity from the threat of extinction, and 30,000 Deathclaws, the deadliest mutants to roam the wastelands of the Fallout universe, face off outside the Brotherhood’s base of operations at Boston Airport in Fallout 4.

Only the mod community can bring you something as ludicrous as a battle of this size.

The Brotherhood/Deathclaw bout is the ninth Fallout 4 battle video that Cosmic Contrarian has uploaded to YouTube. Watching a hundred irradiated Ghouls beating up on a hundred android Synths is also fun.

Or, you could watch Liberty Prime take on what looks like the entire city of Boston and count how many nuclear explosions go off during the fight.