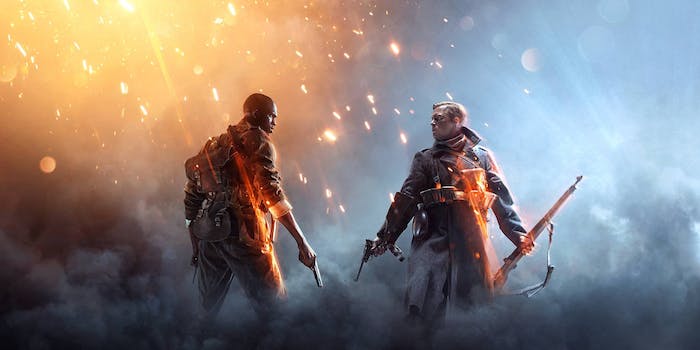 The best shooting games of the 2016 holiday season

The holidays will be very merry indeed for gaming fans.

Each year, fall ushers in a flurry of new game releases, many of them high-profile shooters. While we’ve come to expect annual or semi-annual iterations of series like Call of Duty and Battlefield, this year brought us a full slate of impressive games from all corners of the genre.

Below you’ll find a list of the five biggest shooters released in the past few months, ranked based on the strength of their story, gameplay, and multiplayer options. Activision’s ambitious MMO-style FPS Destiny has gone through some serious changes since debuting back in 2014. Last year’s massive expansion The Taken King practically reinvented the base game and gave players something more in line with their original expectations. While Destiny never set the gaming world on fire quite like it had hoped to, it grew to garner one of gaming’s most dedicated and passionate player communities.

Rise of Iron is supposedly the last big expansion before the rumored Destiny 2, and it sought to expand the mysteries of the futuristic sci-fi world. The new content built on existing characters’ backstories and introduced a new area to explore filled with dangerous new foes. While The Taken King was almost a relaunch for Destiny players, Rise of Iron rewarded only the players who kept coming back to play since the last big update. The new batch of gear and weaponry available is some of the game’s best, and the Raid provides one of the most challenging Destiny experiences to date. Though Gears of War 3 put a cap on Delta Squad’s story, we pick up 25 years down the road with Marcus Fenix’s son JD and a new generation of heroes. The Locust threat has subsided since the end of the last trilogy, but a mysterious new threat is rising, literally from underground. Gears 4 wonderfully builds on the world established in the original games while carving out a new legacy. The characters we’re introduced to are entertaining and come with a sense of camaraderie. The story might feel familiar to Gears die-hards, but teases a new direction for future games.

The real star in the Gears of War series has always been the tight third-person action, and the fourth installment of the series finds gameplay at the strongest it has ever been. Snapping to cover and ducking between walls is as responsive as ever, while shooting and reloading has a serious weight. The multiplayer modes have a competitive edge this time around, with rotating maps and supply drops promising constant rewards for players who keep coming back. Horde is also reimagined in the latest iteration, with tower defense elements built in. The way Horde is integrated into the campaign is thrilling as well, providing an excellent example of the strength in each of Gears of War 4’s various modes. Call of Duty hasn’t been a series known for reinventing itself. Year after year, the game provides an explosive set-piece-heavy campaign backed up with a thoroughly irresistible suite of multiplayer offerings. Infinite Warfare is the franchise’s boldest move forward in a long time, switching a hard science-fiction take on militaristic storytelling. The story centers on a conflict between Earth and an army of soldiers from other colonized planets, led by a villainous character voiced by Kit Harrington.

Infinite Warfare’s story hits the right emotional beats and stars many well-written, compelling performances by the supporting cast. By the time the credits roll, players will likely feel attached to several of their character arcs. And of course, the competitive multiplayer and zombie-slaying modes provide the repetitive thrills Call of Duty fans love. Most of the innovation comes in the campaign, which should be experienced by even the least interested fan of the series. When Titanfall landed in 2014, it was missing a serious single-player mode, and while the multiplayer was frenetic, the dedicated player base dwindled and quickly fell away. Clearly, Respawn Entertainment took these criticisms to heart, as the Titanfall 2 campaign is one of the most original, engaging FPS single-player experiences to hit shelves in years. The relationship between Pilot and Titan takes center stage in the narrative, and though everything else falls to the side story-wise, the various gameplay mechanics introduced are guaranteed to surprise anyone picking up the controller.

The staple of Titanfall’s gameplay is unrestricted mobility of movement, from running on walls, sliding under enemies, and hovering in mid-air. Across the single-player and multiplayer modes, Titanfall 2 remains a fast, action-packed experience. An unfortunate launch date sandwiched between the year’s other big games has resulted in low sales and few players online, but regardless of how the multiplayer audience shapes up, Titanfall 2’s campaign will be remembered for a long time. You may have noticed that every game previously mentioned on this list features some form of science-fiction storytelling. The FPS genre has slowly been moving away from gritty depictions of real-world conflicts like World War II and the Vietnam War, in favor of futuristic dystopias that imagine a new age of militaristic combat. With Battlefield 1, DICE shifted the focus a hundred years back to World War I, creating a setting with an attention to detail and level of realism that easily make it the strongest shooter package of the year.

Like previous Battlefield games, the multiplayer features massive maps for large teams to
traverse, forming class-based squads that hop into armored tanks and biplanes to claim objectives. The environments in multiplayer maps depict rolling countryside hills and harsh deserts. Weather, sunlight, and destruction make for dynamic environments that change over the course of each match. A great twist on the single-player campaign comes in the form of vignette storytelling, as the narrative jumps around multiple countries to check in with soldiers from all sides of the conflict. The story is poignant, violent, and a thoughtful depiction of one of history’s darkest chapters. Overall, Battlefield 1 offers a powerful campaign and in-depth multiplayer modes, making for a game that FPS fans should not miss.