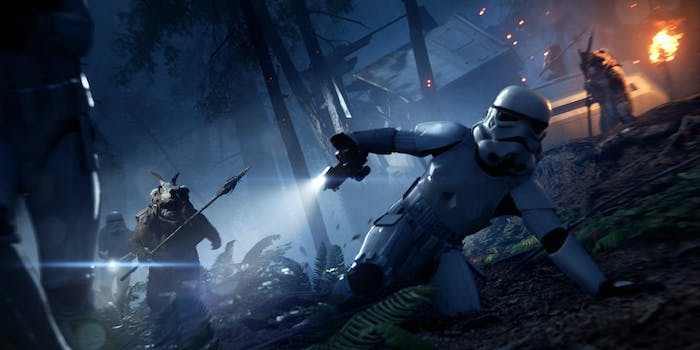 ElectronicArts revealed the first look at the newest game mode being added to Star Wars Battlefront II, and it’s about to get hairy for a group of unsuspecting stormtroopers.

The mode, which is titled “Ewok Hunt” and will be available for PlayStation 4, Xbox One, and PC (accessible if you have Xbox Live Gold or PlayStation Plus), will place you on Endor in the middle of the night as stormtroopers on the ground clash with Ewoks up in the trees.

“Ewok Hunt” allows you to start off as either an Ewok or a stormtrooper, with your objective playing out differently depending on what side of the battle you’re on. Whenever a stormtrooper dies, they respawn as an Ewok. The skirmish ends when there are no stormtroopers left. To survive, stormtroopers need to hold out long enough to be rescued by an extraction team. The side you choose to fight on comes with its own set of pros and cons. The stormtroopers might have more firepower behind them, but the Ewoks are far more capable of moving around on their own terrain.

No word yet on whether these Ewoks will try to eat the stormtroopers, too.

“Ewok Hunt” will be available in Star Wars Battlefront II for a limited time starting April 18.