Evolve stalks new territory, but doesn’t quite master it

Evolve falls flat in providing a game as interesting as the premise.

Of all the words I expected to use to describe Evolve, a game with giant monsters crashing through the forest while being chased by hunters with guns blazing, “slow” was not among them.

If you understand the game of hide-and-seek, you understand Evolve. Instead of one kid hiding there’s a monster that can eat wildlife and evolve into larger and deadlier forms. Instead of a bunch of seekers, there’s four hunters armed with traps, guns, healing devices, and shield generators who are trying to kill the monster. All the game modes in Evolve work around this central premise.

There’s a Monty Python sketch about Olympic hide-and-seek where the players literally have the entire world to scour for a hiding spot. As you can imagine, it takes years to complete the game. Evolve reminded me of that sketch more than once, especially when I was playing as one of the hunters. Too often, the majority of a round of Evolve was spent chasing the monster around, like the video game equivalent of going for a jog.

Then, when a battle finally broke out, the fight was so chaotic it wasn’t very satisfying. That was true regardless of whether I was playing as a hunter or the monster (which is an option in this game). Between this unevenly paced experience was a ton of down time, including waiting for matches to load up, choosing character classes, or watching the post-game show. The pace of Evolve can be glacially slow, and it started wearing on my nerves very quickly. 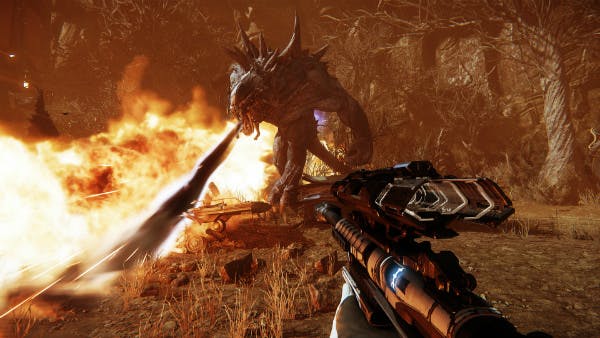 In Evolve’s primary game mode, called Hunt, one player acts as the monster and begins the round in a dense forest that teems with wildlife on the planet Shear. The monster has a smell ability that acts like radar, picking out animals the monster can eat and draw energy from. When the monster has stored enough energy it can evolve into a larger, more powerful creature. The smell ability also susses out flocks of birds that can startle and fly into the air, giving away the monster’s position if it gets too close to them.

After the monster is given a head start, the hunters are dropped into the forest—the metaphorical equivalent of counting to 10 before the seek begins—and the hunters start tracking the monster by following its glowing footprints on the ground. They can keep an eye out for flocks of startled birds and stalk toward carrion birds that have been attracted to one of the monster’s recent kills.

The hunters are each a different class—assault, medic, trapper, and support—with a compliment of related abilities. The trapper can lay down snares and drop a force field to trap the monster within a small area. The support class can project force fields onto other players, or drop bombardments on the monster from orbit. The assault class carries heavy weapons to do as much damage to the monster as possible, and the medic has to keep everyone alive. The hunters win the round if they kill the monster.

At the end of the round all players receive experience points that unlock perks and badges among other things. There are also three different characters to play as within each class type, and the new characters are unlocked as players gain experience. The end of the game also displays an overhead map that shows where the players were throughout the round, which comes in handy when trying to improve one’s strategies. 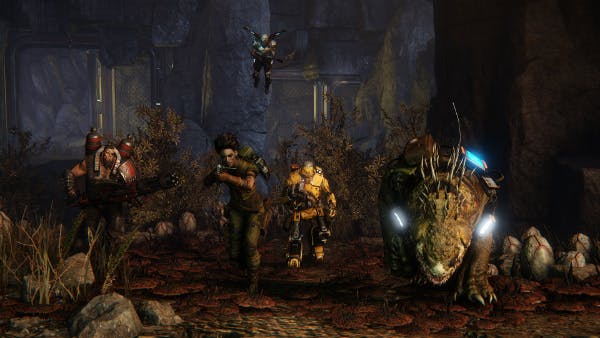 There are several game modes besides Hunt that come into play in Evacuation mode. They’re based around mission objectives like destroying monster eggs, saving wounded colonists, or protecting a starship refueling station. All three of these other game modes tend to have more action than Hunt, owing to the predictable locations the players will inevitably converge upon. They also, on account of the heavier dose of action, shine a light on just how slow Hunt mode can be.

The default trapper is named Maggie, and she has a four-legged companion animal named Daisy. Daisy constantly chases after the monster, signaling when the monster is close without giving away its exact position. She keeps the game moving even when the hunters have no flocks of scared birds or glowing footprints to investigate. I felt like I spent 90 percent of my time chasing after Daisy while playing a hunter.

Once I was caught by the hunters, or when I was playing as the hunters and we finally cornered the monster, things actually got less enjoyable. Firefights are confusing, at best. When I played as the assault class, and had to get in close to do the most damage, I often found it difficult to keep track of where the monster was because things moved so quickly.

The only trapper ability I found to be useful was setting up the mobile arena forcefield that limited the monster’s movement. I found it difficult to use any of the support class abilities, and while healing as the medic was comparatively easy to pull off, the default medic only has a sniper rifle that I found next to useless during a fight.

When I got into a fight as the monster, I was never quite sure whether my giant swipes at the ground were actually hitting anything. I often had just as much or more success during a fight by pointing myself at a hunter and mashing all the attack buttons, rather than using the monster’s abilities in a more precise manner. And after the fight was finished, if I didn’t win, I had to go back to playing hide-and-seek in order to heal up. The constant ambush-and-retreat gameplay grew very tiresome after a while. 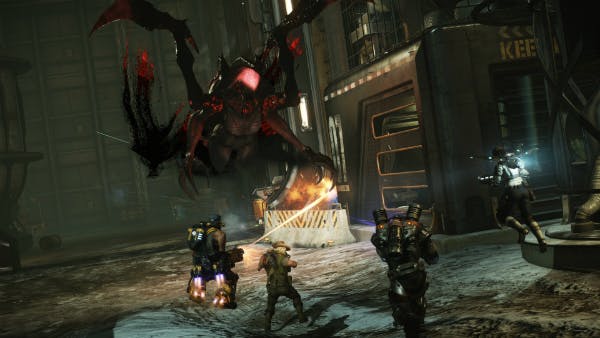 I respect Turtle Rock Studios for trying something different. If there is another first-person shooter like Evolve on the marketplace, I haven’t heard of it. I also feel like the lack of a successful precursor for the developers to observe and learn from may be responsible for how uneven the pacing is in Evolve.

There were times when I felt like Evolve was a game that would require not just experience but bona fide training in order to master. All the down time was discouraging, however, in terms of wanting to stick around and go through that training. Endless jogs through and hiding in forests and combat that wasn’t satisfying for all its vagaries made Evolve palatable for me only in small doses. It was nothing I wanted to play for extended sessions.

I began to wish for smaller maps, to truncate the length of the hunt. I started wishing for the fights to be more straightforward and less chaotic. Unless there’s something else to engage me in a first-person shooter game—like puzzle solving or philosophical questions raised by the world I’m in—I want to run around and shoot things, not wait for an opportunity to run around and shoot things.

Disclosure: Our review copies of Evolve on the PC and Xbox One were provided by 2K Games.

All images via 2K Games.