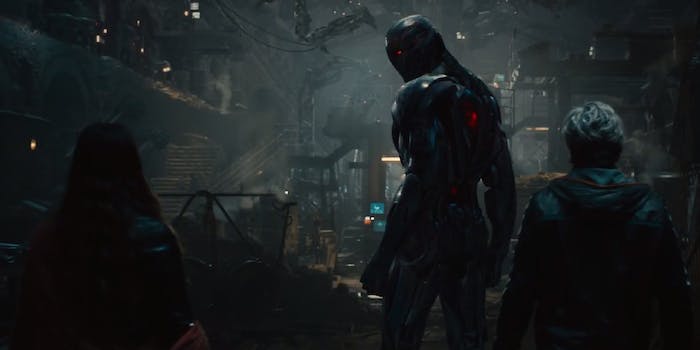 Avengers fans were not prepared for how hot Ultron is

It's Secretary all over again.

Since Wednesday night’s surprise leak of the Age of Ultron trailer, the Avengers fandom has been going nuts—and probably not for any of the normal reasons you’d expect.

We’ll just be blunt: At the moment there seems to be a bit of an obsession with hot robot (insert descriptor of your choice).

James Spader’s voice can make anything sexy, even an evil robot. Or, perhaps, since this is fandom we’re dealing with, we should say: especially an evil robot.

me, knocking on your door: Yes, hello sir I was wondering if you had a few moments to talk about our lord and savior, the glorious Ultron?

I want Ultron to untangle my strings.

Fans are gearing up for an invasion of robot shipping after the exploits of Ultron in the new trailer. If you’re an all-Ultron, all-the-time kind of fan, Tumblr user the-comics-sans has helpfully created an Ultron-only edit of the trailer. Or you can just cruise the Ultron tag on Tumblr until you question your sanity.

Indeed, Tumblr users may be having a little trouble coping with how hot they find the latest Marvel Studios villain. This shouldn’t be surprising, given how hot they found the old one, but Spader seems to have taken everyone by surprise. Then again, given that Marvel fandom is a sci-fi fandom, and sci-fi geeks tend to, well, geek out over things like shiny evil sentient tech. Can you blame them? He is really shiny.

And red-eyed and demonic and terrifying and, er…

You and the rest of us, pal—though the robot thing is new.

Because we know Ultron is an accidental creation of Tony Stark, we’re bound to be getting at least a smattering of terrifying Ultron/Tony (Iron Man suit optional). After all, Avengers fandom is no stranger to sentient A.I. sex—we read plenty of Tony/Jarvis shortly after the first Iron Man.

Despite Deepsix’s open invitation to make everything robots, other corners of Tumblr seemed to be side-eyeing the new robosexual movement.

OK, so maybe we’re not ready to welcome an Asimov-style robot army just yet. But all this excitement about Ultron makes us really excited for the movie.

Not to mention that all the glimpses we see in the trailer of the Avengers team—Cap’s broken shield, Natasha looking grim, Bruce trying not to hulk out, and Thor putting Stark in a chokehold—make it clear that Ultron is going to wreak just as much havoc on each of them as he has with all of our hearts.