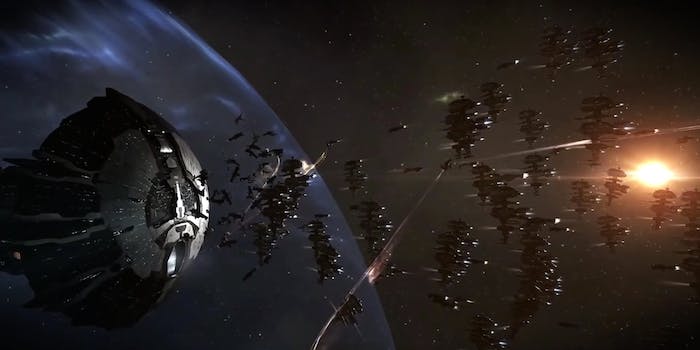 The book would tell the true stories of how players experienced the conflict.

The war that led to one of the largest, most famous battles in the history of EVE Online may soon be immortalized in book form.

The campaign seeks $150,000 for a book about the Fountain War and the memorable July 2013 battle known as the Fall of 6VDT. The battle was so massive that it captured the attention of people outside the gaming community—a rarity for an individual in-game event.

Military thriller and science-fiction author Jeff Edwards will write the novel, appropriately titled The Fountain War. According to the Kickstarter, Edwards will use “battle archives, in-game communications transcripts, and the testimonies of combatants from all sides of the conflict” to tell the story of the war’s events.

The novel will also be released in quarterly installments so fans don’t have to wait for the completed book to get their fix. The campaign’s creators want the book to be the first in a new genre they’re calling “sci-fi non-fiction”—as well as the first of many books to chronicle EVE Online adventures.

The campaign has already raised more than $17,000 and runs for another 32 days. Nearly 300 people have backed the project.