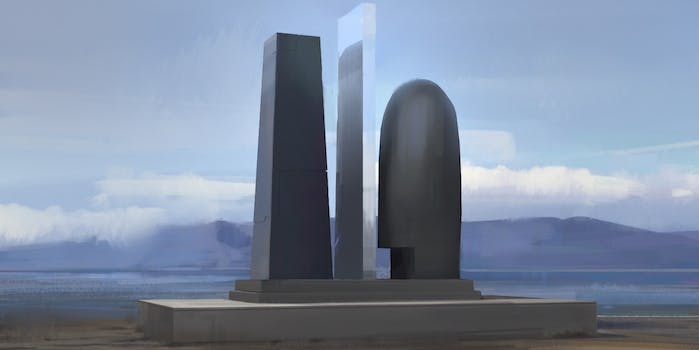 The vandals behind the defacement of a monument in Iceland have been charged—virtually at least.

A group of men have been permanently banned from the popular massively multiplayer online role-playing game EVE Online after they defaced a monument for the game in Reykjavik, Iceland.

Named “Worlds within a World,” the EVE monument opened Feb. 6. It was the made to “stand testament to the collective and manifested will of hundreds of thousands of gamers, dreamers, leaders, wingmen, pirates, betrayers victor and defeated,” according to a CCP Games press release. It contains the name of ever active EVE Online players’ main characters.

The four vandals stuck a sticker on the side of the monument and scratched out one of the names of the players. It’s unclear at this time if the vandals will face criminal charges. EVE producer CCP Games (Crowd Control Productions), however, wasted no time handing out its own form of justice.

“Earlier this week CCP announced three players have received lifetime bans for their actions, across seven different EVE Online accounts,” PCWorld reported. “The fourth player received a six-month ban from EVE Online. CCP managed to track down the perpetrators by talking to community members and other members of the indicated alliance.”

Eve was released in 2003. It allows its more than 500,000 players to explore a galaxy in customized ships. Players can mine, trade goods, and explore the galaxy. In late March, the game made international headlines after factions fought in a battle costing the equivalent of $300,000. This latest incident, however, was rare in that it happened not in-game but in the real world.

“Firstly, I’ll say that the fact that the monument was vandalized is an insult to the entire community, not just to the individual who’s name was directly targeted by the vandalism,” stated an EVE developer. “Thankfully with the assistance of a number of members of the community, including some of those who were involved with the incident and other members of their own alliance, we’ve been able to make headway in identifying those responsible.”

The EVE developer reiterated that the game has a zero-tolerance policy for harassment and victimization.