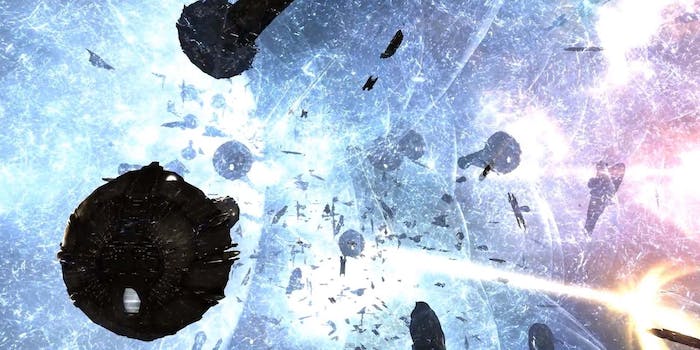 $300,000 worth of ships destroyed in ‘EVE Online’s’ biggest battle ever

A battle became a slaughter.

While it’s no secret that video games are serious business these days, it’s sometimes hard to remember exactly how much of a big deal they are. You’d need at least $300,000 to pay for the damages incurred in a still ongoing conflagration between 2,200 players on a massively multiplayer sci-fi game called EVE Online.

It’s the biggest battle in the game’s history, the latest engagement in a war that’s been raging since late October.

Over the span of the last 15 hours, more than 70 Titans, EVE Online’s biggest, baddest and most expensive ships, have been destroyed. To put matters into further perspective, someone running “missions”, or NPC-assigned quests, for two hours every day would, on average, only be able to acquire a fully kitted-out Titan after three years of daily labour. That’s a combined total of 210 years of in-game labor. Gone.

As of a few hours ago, it looks like the fighting is mostly done. It’s more of a “slaughter,” according to EVE blog The Mittani, with ships from the Clusterfuck Coalition mopping up their foes, the N3PL.

The battle may have proved costly for the N3PL, but at least it provided the rest of us with some gorgeous visuals.