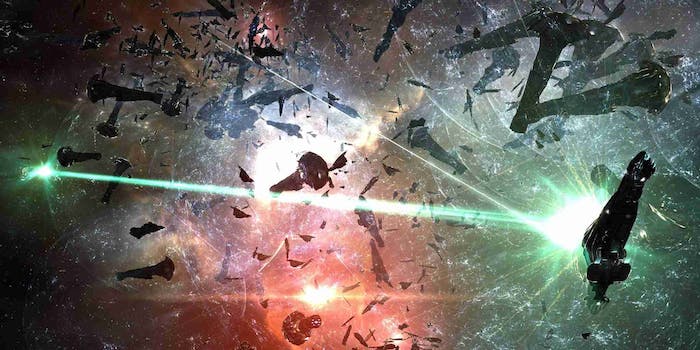 The "Bloodbath of B-R5RB" will be commemorated in the most appropriate way possible.

The biggest online battle ever will be commemorated with possibly the Internet’s biggest memorial ever.

The Bloodbath of B-R5RB, as the 21-hour conflict in massively multiplayer sci-fi game EVE Online has been dubbed, began on Jan. 27. That’s when a player-run corporation—a conglomeration of like-minded people working under the same banner—called HAVOC failed to pay their bills. Specifically, this was a sovereignty bill, which  they need to keep control over one of their star systems.

Havoc’s enemies swooped in, and the titular bloodbath ensued. (Those curious about the full details of the situation may want to peruse CCP Games’ meticulous account.)

Eventually, the dust settled. All told, costs hover somewhere around the real-world equivalent of $300,000. And the players, unsatisfied, perhaps, at the idea of simply having their struggle consigned to Internet memory, began clamoring for an in-game monument to the carnage.

CCP Games eagerly complied by going to work on what they dubbed as the “Titanomachy.” A memorial, built to resemble the gargantuan Titan starships which were lost in the conflict, will be permanently installed in the star system B-R5RB where it all took place. Talk about going all out for your fans!