You can now bid for a piece of industry history.

This April, with a dust storm whipping trash around a landfill off the fastfood-dotted main drag in Alamogordo, New Mexico, a legend was reborn. Now, for better or worse, anyone can own a piece of that legend.

Having materialized courtesy of a project out of Microsoft’s now-defunct Xbox Studios, the first copies of E.T. The Extra-Terrestrial are now available for sale on eBay. Bids for exhumed copies of the infamous Atari 2600 title are already up to $400 with nine out of 10 days left in the auction. (Hundreds of copies of the game emerged smashed and dusty, so don’t expect them to play.)

Parts of the collection that haven’t hit eBay will be doled out to museums for posterity. The dig itself and the full, sprawling legend will be told in Atari: Game Over, a documentary by Microsoft’s Xbox Entertainment Studios, slated to hit Xbox Live on Nov. 20. 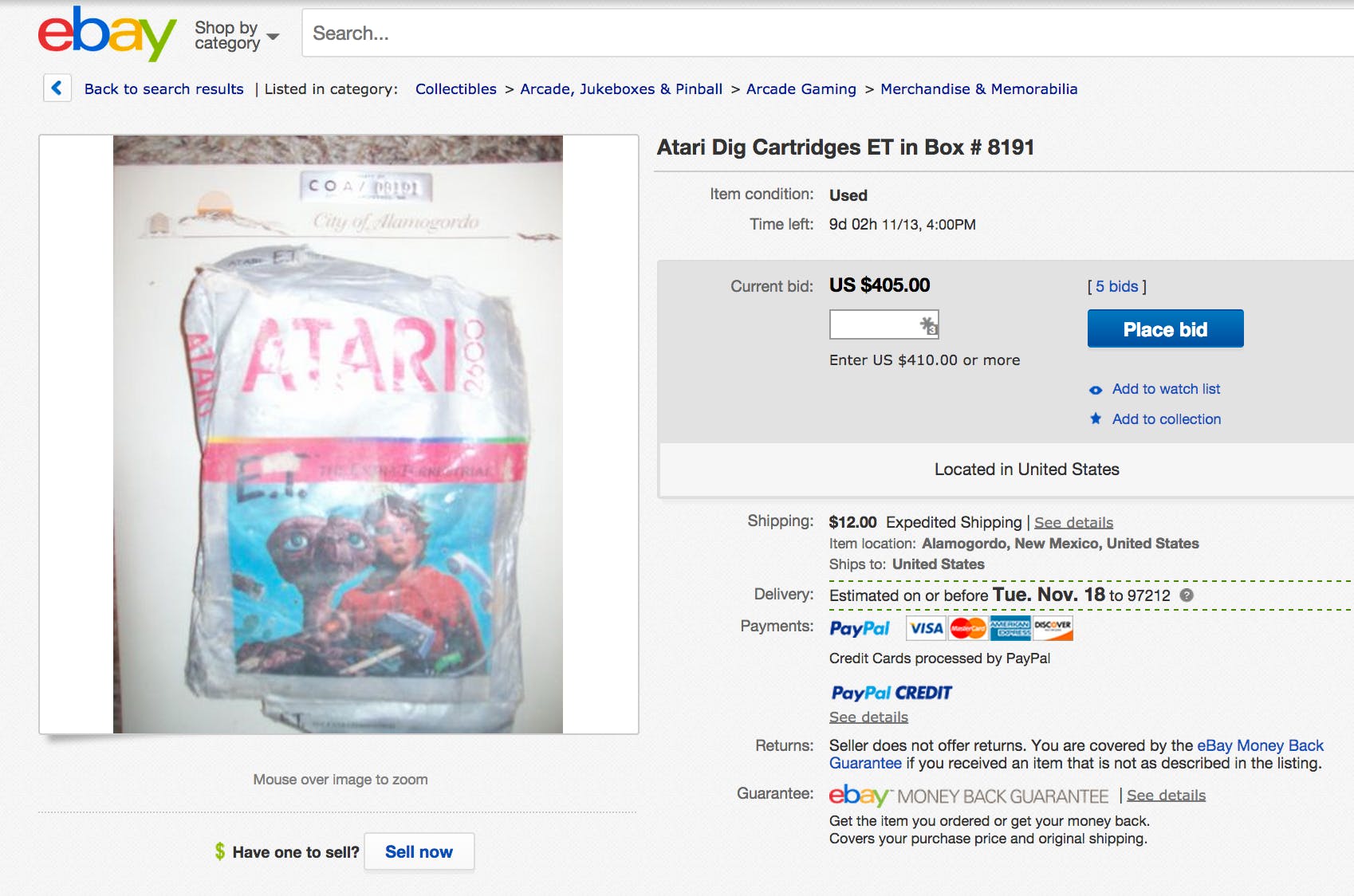 This game is one of the limited numbers recovered from the “OLD ALAMOGORDO LANDFILL”, also known as the “ATARI DUMP”. Purchaser will receive the game as portrayed in photo above, City property I.D. tag, the Certificate of Authenticity and a narrative with photos of the 1983 burial and the 2014 excavation proving the legend to be true. The seller does not represent that this item is operable; it was buried for 30 years. SOLD AS IS.

The eBay listings of ancient Atari detritus are straight from the city of Alamogordo, which agreed to the dig if it could turn a buck, too. Neither Alamogordo nor Ebay user tbhs575 seems to have a nuanced grasp on the mechanics of the online marketplace, but given the decades of intrigue surrounding Atari’s secret shame, at least some of the city’s 99 simultaneous auctions are likely to hit some pretty sky high prices. Beyond E.T., the seller also posted listings for copies of Centipede, Phoenix, Asteroids, and Defender, among other once-buried Atari titles.

This April, with Xbox Studios footing the bill, a group of filmmakers, Microsoft execs, archeologists, game designers, video game enthusiasts, and mildly curious locals milled around a hole in the ground as a tractor unearthed copies of E.T. The Extra-Terrestrial, a contender for worst video game of all-time and a potent symbol of the nosedive that Atari took, starting in 1983.

I was present at the dig, and E.T. cartridges were actually in the minority, scattered here and there among more than 30 other Atari games, some of which, like Pele’s Soccer, were far more rare. Happily, a group of self-identitied (though classically trained) punk-archeolgists, led by Andrew Reinhard, were there to catalogue anything they were able to pull out of the ground before the city stubbornly closed the hole in the ground again.

There are likely still thousands of copies buried just off Route 70 behind the McDonalds, but unfortunately the city is more interested in turning a buck than letting enthusiasts dig any deeper into the legend of the once-great tech company that took a hard fall from grace.