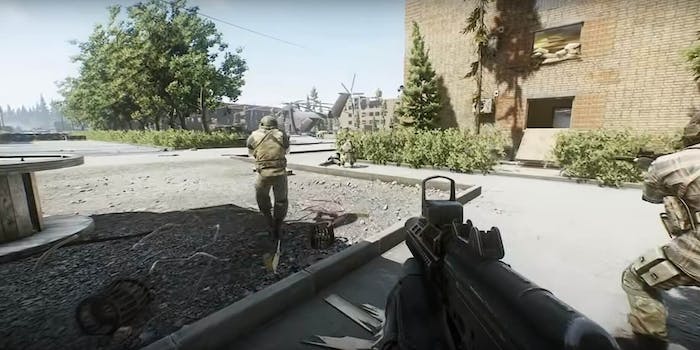 Escape from Tarkov creators say women are too complicated to include

Incredible as it may seem, yet another video game developer is claiming that women are too hard to animate, thus explaining a dearth of female characters in their game.

Escape from Tarkov is an action/survival RPG taking place in Russia, where your main goal is to escape from a city called Tarkov. Closed alpha and beta versions came out in 2016 and 2017, with a final version on the way. In response to questions about whether the game would ever include playable female characters, the studio Battlestate Games replied on Twitter: “there will be no playable female characters because of game lore and more importantly – the huge amount of work needed with animations, gear fitting etc.” There are some non-playable women in there, but that’s it.

This excuse soon became a target of derision on Twitter, partly because “women are hard to animate” is now a hoary old chestnut, and partly due to the absurdity of “game lore” requiring an entire city populated by men. If you go to the Escape from Tarkov website, you won’t find any mention of a homosocial society being essential to the game’s worldbuilding. The “huge amount of work” excuse also feels kind of strange for a first-person shooter, where you mostly just see the protagonist’s arms and weapon.

Back in 2014, a similar controversy sprung up around Assassin’s Creed, when Ubisoft’s technical director claimed that female playable characters would “double the work” of the game’s animation team. Around the same time, the lead animator of Frozen said that women were “really, really difficult” to animate. As opposed to, say, cartoon snowmen.

You might think that including female characters would be a straightforward matter of creating a female skin and adding it to an existing animation framework, but the idea that women are “harder to animate” may come from a belief that women move in a radically different way. One infamous example is this fanmade video where someone swapped Batman and Catwoman’s roles in Batman: Arkham Knight, leading to a scene where Catwoman basically walks “normally,” while Batman struts around in an absurdly hypersexualized manner.

someone swapped the batman and catwoman character models and… oh my god pic.twitter.com/BneQFmdIzf

Game critic Anita Sarkeesian critiqued the “women are harder to animate” idea in her popular video series Tropes vs Women in Video Games, highlighting sexist portrayals of women as non-playable characters. Considering the amount of effort that game developers put into other details like realistic horse pooping, it’s obvious that a lack of female characters is often due to internal biases rather than practical concerns. The idea of female characters being unnecessarily labor-intensive is just an excuse, born from a subconscious belief that men are the default example of humanity while women are inconvenient outliers.