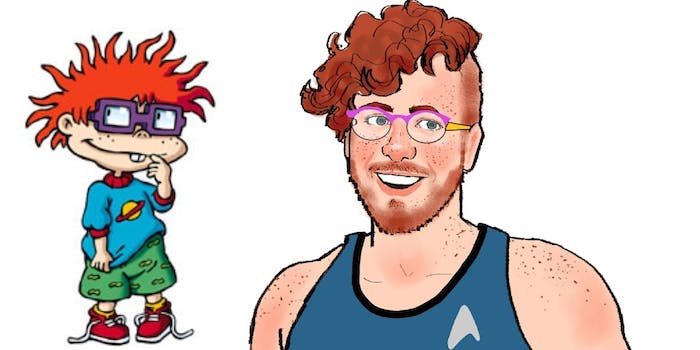 The creator doesn't think the work is authentic to the original—and fans are fighting back.

Former Nickelodeon artist Eric Molinsky quit the animation industry because his heart wasn’t in it. But he still cares about the characters he drew for years—and the way fanartists are drawing them now.

It seems he doesn’t like what he sees when it comes to fans creating adult versions of the Rugrats gang—something he pointed out in a recent blog post. Now fans are speaking back, arguing that their depictions of the characters are every bit as valid as his own—even if Molinsky is speaking from a creators’ pulpit.

The conversation was sparked when Molinsky decided to contribute to a recent fanart trend of reimagining characters as older, modern versions of themselves. This trend has become a universal theme across fandoms, but Molinsky zeroed in on the fandom for his own show.

In a blog post for Studio 360, he discussed the trend of depicting ’90s cartoon characters adults and offered his own take on what the characters would look like as grownups. According to Molinsky, they’d retain their “lumpy” appearance, and basically look like, well, grown-up Rugrats: 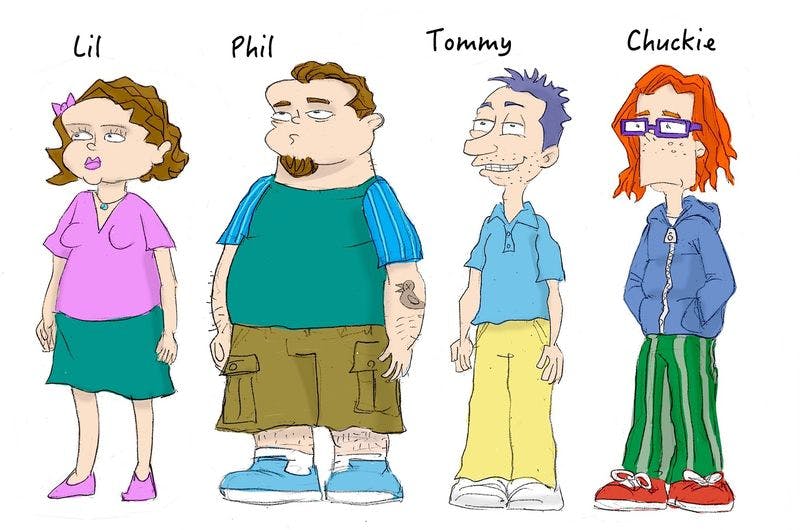 If Molinsky had inserted his work into the larger fanart trend, fans likely would have welcomed it as an example of fans and creators interacting with each other and building off one another’s work—a kind of echo-chamber of mutual creation. You can find such symbiosis in the relationship Legend of Korra fans enjoy with show co-creator Bryan Konietzko.

But Molinsky made it clear he chafes at some fans’ artistic interpretations. He writes:

It really bugs me — not the quality of the artwork, but the interpretation. We referred to them as lumpy babies for a reason. If we ever drew the Rugrats as being too cute, our executive producer would scold us. We were supposed to emulate the style of Eastern European animators — many of whom were brought over, with their sly wit and husky voices (they took a lot of smoke breaks.) When I worked on “All Growed Up,” a made-for-TV movie where the Rugrats imagined themselves in junior high, I tried to keep the awkwardness in tact.

Here are the annoying examples of fanart Molinsky pointed to in his post:

Molinsky dislikes this style of art because he doesn’t see it as authentic to the original.

The Rugrats did not all grow up to be fashion models or self-confident hipsters. Especially not Chuckie. They probably grew up to be average if not slightly lumpy looking people — just like their parents.

When the fanartists realized that Molinsky had called them out, they had rebuttals of their own. Here’s Izzydoodledump, in a Tumblr post explaining and defending the updated artistic style:

Canonically, the rugrats would be in their mid to late twenties if they’d aged with the show. Just like me and my circle. What I tried to do was age the babies up to whatever age they’d be, keep aspects of their original designs and personalities, but also bring them into 2013 (that’s when I drew that art).

Phil’s humor, Angelica’s sass, Tommy’s endearing sense of love for his friends! I wanted to stay true to the characters, but also add my own aesthetic!

All of this doesn’t even go into the fact that my drawing style is completely different from the show and the artists who shaped these characters that I love so much.

Fanartist celestedoodles, in a response on her own Tumblr, pointed out that Molinsky’s concerns about fanartists’ refusal to adhere to professional styles is a moot point, since they’re fans, i.e. amateurs who aren’t getting paid to follow an approved format:

This rant operates as though we’ve all been hired by a studio to design and animate a new Rugrats show but you need to step back and see that this whole thing boils down to you being mad that young people on the internet had fun appreciating something you worked on decades ago. How terrible…

Maybe consider protecting the legacy of your work by not bitterly picking on young people who do things for fun online.

It doesn’t appear that Molinsky’s complaint is against fanart itself, if this portrait of a Klingon on his Twitter account is any indication.

His criticisms are more directly pointed at artists who aren’t drawing Rugrats characters in the canonical, network-approved style—the literal interpretation seen in Molinsky’s own adult Rugrats fanart. Still, his comments have riled the ire of the fandom community because they echo a long legacy of creators and outsiders having a hard time dealing with the often anarchistic way that fans make stories their own—whether that’s fans doing the “wrong” things with the characters, or fans having alarming amounts of agency over their own artistic experiences.

One thing is certain: The popularity of these and other examples of Rugrats fanart on Tumblr, deviantART, and other locations indicates that fans still have as much love for the series as ever. And works like these keep the flame alive.