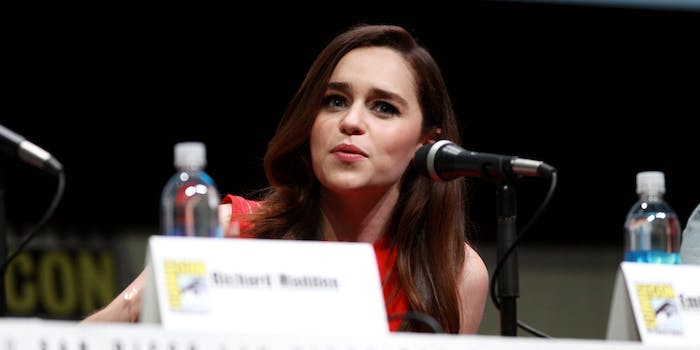 Emilia Clarke defends sex and nudity on ‘Game of Thrones’

Emilia Clarke has never been shy whenever she’s addressed Game of Thrones’ age-old nudity issue, but her patience is starting to wear thin with people’s obsession with it.

In a Harper’s Bazaar cover story, she turned to the topic in-between discussing her upcoming projects and the perfume she’s promoting.

And Clarke defending the show’s nudity and criticizing those who have pushed back on it is nothing new; she’s been doing both in interviews for years. Her mention of The Handmaid’s Tale, however, makes her latest argument on it a bit messy. The Hulu show’s first season didn’t have all that much nudity—and when it was there it almost always had another purpose to it. The majority of the sex scenes in The Handmaid’s Tale depict rape, offering commentary on the kinds of power imbalance struggles and hypocrisy that exist in Gilead. The many letters Handmaids are revealed to have written about the sexual violence and atrocities they’ve suffered in Gilead in the season 1 finale particularly drive this point. We don’t even see a consensual sex scene until episode 5, part of which is shaped by its nudity instead of the more clinical “ceremonies” we’re shown on multiple occasions.

But Clarke’s bigger point touches on the double standards of nudity on television. Even now, there’s still so much outrage or “concern” about seeing something that people do all the time on television.

“There are so many shows centered around this very true fact that people reproduce,” she said. “People fuck for pleasure—it’s part of life.”