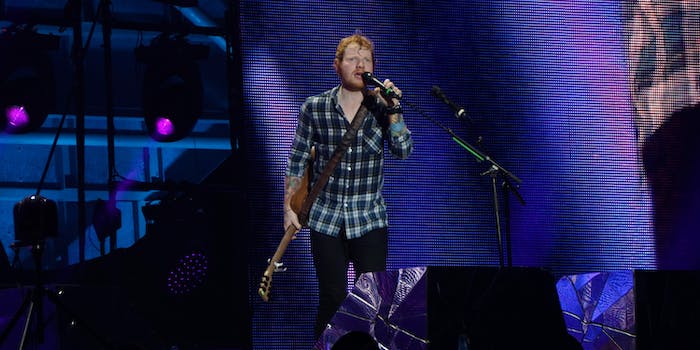 He'll be in familiar territory.

When Game of Thrones returns in July, it will be getting one of its most recognizable musical cameos to date. Now we know even more about where and how it will happen.

Showrunners David Benioff and D.B. Weiss first revealed that Ed Sheeran would appear in the show at SXSW, explaining that they wanted to cast him to surprise Maisie Williams, who plays Arya Stark and is a big fan of Sheeran’s music. Although Game of Thrones is notoriously secretive, Sheeran has been more open than most about his cameo. He previously revealed that he would survive his first appearance in Westeros—noting that he’s in the show for about five minutes—and he discussed his role even further in a new interview with The Hits Radio.

For Sheeran, the role isn’t too far-off from real life: he’ll be playing a musician.

The role would make him the first musician to cameo as a musician on Game of Thrones since Sigur Rós performed at Joffrey Baratheon and Margaery Tyrell’s fateful wedding reception. From the sounds of it, it might go a lot better too; Joffrey threw coins at Sigur Rós to make them stop playing.

Arya, who will be fresh off murdering Walder Frey when we see her at the start of season 7, could potentially pop up anywhere (and as anyone), so it doesn’t really reveal where we’ll see Sheeran’s cameo. But having a musician around—even briefly—may lend credibility to a bigger area such as a castle or even a city. And if what Sheeran says about Arya’s response to his music is true, it could show a brief pause from Arya’s all-consuming revenge.