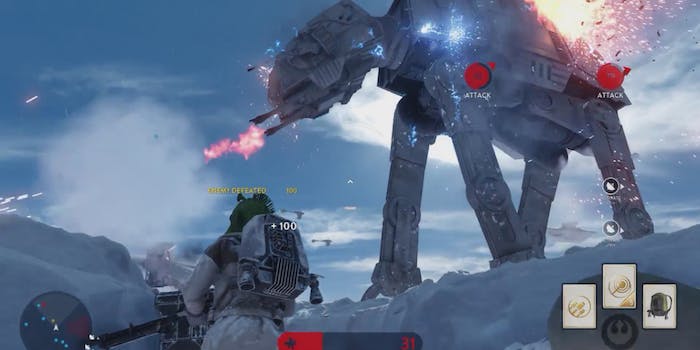 The Electronic Arts press conference today at E3 seemed like an hour-long run-up to the star of the show: Star Wars Battlefront.

And it was worth the wait.

EA promises a “visually stunning” experience for Battlefront, based in part on the incredible access developer DICE was given to Lucasfilm’s archives. That’s not an oversell: The game does look pretty amazing. Here’s Walker Assault mode, which takes place during the Battle for Hoth.

Electronic Arts seemed to know darned well it was saving the most exciting part of its press conference for last. A graphic that read “In 50 min: Star Wars” appeared in the lower left-hand corner during the Need for Speed presentation. Patrick Soderlund teased the Battlefront finale to the presser after a presentation for a free Star Wars: The Old Republic expansion named Knights of the Fallen Empire. The gameplay chaos of the Battle of Hoth did not disappoint.

The applause after the conclusion of the Battlefront gameplay footage punctuated what everyone already knew. The game looks awesome.