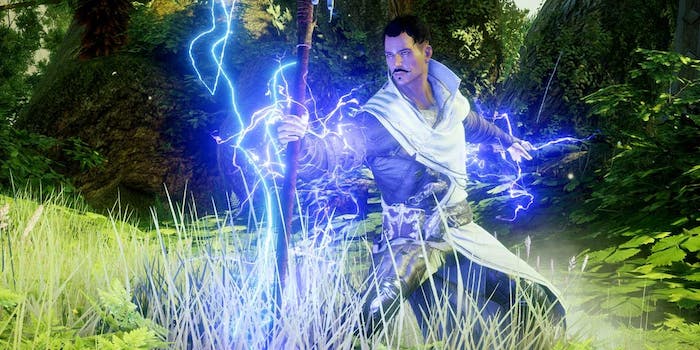 Electronic Arts isn't shining much light on the decision, made just a week before the game release.

The video game industry is a global marketplace, especially for publishers that develop the biggest triple-A blockbuster games. So what happens if your game breaks cultural taboos or local laws?

Electronic Arts announced on Friday that Dragon Age: Inquisition would not be sold in India, “in order to avoid a breach of local content laws.” The announcement was posted to its official help website just a week before Inquisition was due to be released in India.

Customers in that country who pre-ordered and paid for Inquisition through EA’s digital distribution service Origin will receive a full refund.

Milestone Interactive, a local distributor, told U.K. news channel NDTV that the decision had something to do with Dorian, the first gay character in the franchise (though there have previously been male, bisexual characters). And in the absence of clarification from EA, word spread on Monday that the company didn’t want to run afoul of India’s legal stance on homosexuality.

Gay relationships remain illegal in India, following a 2013 ruling by India’s Supreme Court that upheld the constitutionality of the nation’s ban on gay sex, after it was overturned by the lower Delhi High Court in 2009.

In a statement to Kotaku late Monday, however, EA said it pulled the game from India because of local obscenity laws. The game publisher said the decision had nothing at all to do with gay characters or same-sex relationships. It turns out that India’s obscenity laws are frustratingly unspecific, and Dragon Age presents a variety of sexual situations that could hypothetically create problems for EA. That being said, other games with adult content have released in India, including Grand Theft Auto V.

EA has been mum on further clarifying the issue. It had not returned the Daily Dot’s request for comment as of publication time.

Banning or censoring games because of content is not an uncommon occurrence in the world video game marketplace. Australian consumers have for years been dealing with outright bans and censored versions of games that depict violence. In those cases content is policed by an Australian government ratings board, so problematic issues from their point of view may be clearly spelled out.

Pulling Inquisition from Origin will not prevent the newest Dragon Age game from being played in India. Even if distribution networks like Amazon, the PlayStation Store, or the Xbox Live Store also region block digital sales of Inquisition, gamers in those countries can always purchase physical copies from elsewhere.

Dragon Age: Inquisition will be released today in North America on Tuesday for PC, PlayStation 3, PlayStation 4, Xbox 360, and Xbox One.